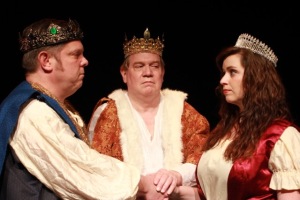 Misdeeds in Shakespeare come in dark and light hues: they are prankish and trivial when the Bard smiles, malign and fatal when he glowers. Misunderstandings follow a similar pattern, absurd and accidental when they aren’t horrifying and purposeful. When such complications are resolved at the end of Shakespeare’s earlier plays, all is mended in the comedies and all is lost in the tragedies. But a new curvature enters the Bard’s storylines toward the end of his career, when he begins to concoct the bittersweet confections that became classified as romances. These include The Tempest, Cymbeline, Pericles and – now at Spirit Square in an outstanding Shakespeare Carolina production – The Winter’s Tale.

In these plays, tragedy strikes. But it’s survived, and we veer towards mirth. Keats may not have understood Shakespeare best among the romantic poets, for Coleridge had the finest critical mind among them, but he was best attuned to this mellowed, autumnal Shakespeare when he referred to life as “a vale of soul-making.” The protagonists in these plays reach wisdom and contentment only through great and prolonged suffering.

Before we reach these romances, Shakespeare strives to compress time as much as possible. Factions and countries seem able to raise armies and launch wars overnight in Caesar and Lear. When we reach The Winter’s Tale, Time is not only a prime element in the story, he or she is an actual character. At Duke Energy Theatre, he comes out at the end of Act 3 in the script, dressed very much like Dickens’ last Christmas ghost, to announce the intermission, leaving an hourglass on a stool.

When we come back, Time properly names himself to start Act 4, tells us that 16 years have passed while we were gone and, cued by the Bard’s blank verse, flips the hourglass to launch the continuation in Bohemia. Back in Sicilia, King Leontes has royally messed things up. Outdoing Othello in jealousy, Leontes has decided that his virtuous Queen Hermione is having an affair with his longtime buddy King Polixenes of Bohemia. Flouting all common sense, he is equally certain that Polixenes has fathered the child she is on the verge of delivering.

Stubborn and decisive, Leontes imprisons his wife, orders his most trusted servant to murder Polixenes, and sends his most valued courtier overseas to dispose of his newborn daughter. Now why was he so sure Hermione is an adulteress? When Polixenes refused Leontes’ entreaties in the opening scene to stay an extra week in Sicilia, Leontes asked Hermione to try – and she succeeded.

Polixenes and the servant escape together, and by the time Leontes discovers his folly, he has lost his wife, his son, his best friend, and his newborn daughter. And according to the Delphic oracle, whose declarations he ignored when they vindicated Hermione and Polixenes, he will remain childless and lose his kingdom unless he finds his lost daughter. Instead of tracking the infant’s scent while it is still fresh, Leontes goes to the opposite extreme of his previous bellicosity, cloistering himself with his sufferings and sorrows, mourning the true wife he wronged.

Not only does the wintry action in Sicilia turn to springtime in Bohemia when the hourglass is flipped, a whole new generation seizes the spotlight. The action blows in the opposite direction, on the wings of two young lovers who will be true to one another. Taking advantage of the new time and place, director Tony Wright flips a large portion of the cast into new roles during intermission.

Perhaps the most significant of these changes occurs just before the break when S. Wilson Lee as Antigonus, the Sicilian courtier who brings the king’s unlucky child to Bohemia, makes one of the most famous exits in theatre history, “pursued by a bear.” Lee comes back almost immediately in a new costume as a new character, the Shepherd who hears of the courtier’s grisly mauling and discovers the babe in the basket. Clearly things have turned toward comedy when a rustic illiterate marvels at his clone’s demise.

And it makes eminently good sense for Faith Benton to reverse the gender deployment that was routine in Elizabethan times, when women were barred from acting, playing Leontes’ son Mamillius in the opening act and his lost daughter Perdita after the break. Benton has a nicely understated elegance that works well for a noble who is ignorant of her nobility, and she projects virginal purity at the heart of the Bohemian scenes that artfully parallels Katie Bearden’s maternal and wifely purity at the center of the Sicilia drama.

It’s quite remarkable that Bearden can bring so much freshness to a role that reminds us of so many Desdemonas and the falsely accused Hero in Much Ado About Nothing. But it’s certainly helpful for Russell Rowe to be deceiving himself so powerfully as Leontes, a lion who creates his own dreary winter out of an apparently loving marriage.

Lowe’s overbearing authority makes Bearden’s steadfast truth and devotion all the more poignant, but it also sparks other forms of opposition. Amy Hillard as the vanished Antigonus’ tart-tongued widow is unsparing in her denunciations of the King, granting him her special clemency only when the Delphic oracle’s prophecy is fulfilled. Just as useful in the wide arcs of this storyline is Kevin Sario as Leontes’ trusted servant Camillo, an anti-Iago who saves his King from himself, ultimately engineering his redemption.

Camillo and Polixenes bridge the two halves of this Tale, so it’s interesting to watch the subtle imperfections that Charles Holmes brings to the King of Bohemia. He probably is a little more affectionate toward Hermione than is strictly proper, and when his family hurtles into crisis, his aversion toward hearing out his son Florizel parallels Leontes’ deafness toward Hermione. In this sunny new comedy world, Polixenes’ faults are more fortunate.

With his bushy hair, Cole Pedigo as Florizel strikes me as more rustic than Benton, but they do make an adoring – and adorable – couple. He actually gets to dress down when Florizel and Perdita decide to elope. Or seek asylum? Obliging him gladly is Ted Patterson as the thieving con-artist Autolycus, who will gladly favor us with a song when he’s not swindling the Old Shepherd and his Clown (Michael Anderson). Like other Shakespeare rascals, Autolycus is luckier than he is smart. Until he isn’t.

In the cavalcade of reunions that closes out this romance, the last is by far the most moving because it redeems so much lost time. A bit of a downer throughout the evening, the scenic simplicity of the production becomes most effective in this tenderest of moments, but Robert Jaeger’s costumes also lift us out of visual poverty along the way. Turns out that it has been a novel idea in Charlotte to do a Shakespeare play – rather than a riff on one – to celebrate the 400th anniversary of the Bard’s death.

One expects a knowing selection from a company that takes the Bard’s name in vain, and Winter’s Tale, a work that resonates with Shakespeare’s final years, proves to be a very apt choice. With this current crop of newcomers and seasoned veterans, this is the best serious Shakespeare this company has done. Shakespeare Carolina really is a mature Shakespeare company now, knowing what they mean and meaning what they, Both the comedy and the drama come at us with the swagger of assured confidence. If only somebody would give them a few bucks!