Almost a year ago, fire struck the Theatre Charlotte building on Queens Road, gouging a sizable trench in its auditorium and destroying its electrical equipment. Repairs and renovations will hopefully be completed in time for the launch of the company’s 95th season next fall, but meanwhile, actors, directors, designers, and technicians are soldiering on at various venues for 2021-22, their year of exile cheerfully branded as “The Road Trip Season Tour.” Ironically enough, Theatre Charlotte’s Season 94 began in September with a downsized musical, The Fantasticks, at the Palmer Building, a facility that once served as a training ground for firefighters. For their 14th production of A Christmas Carol, Theatre Charlotte has moved along to Halton Theater, the permanent home of Central Piedmont Theatre.

Timing is a bit awkward on the campus of Central Piedmont Community College, where a new theater that will be friendlier to dramatic productions – replacing the demolished Pease Auditorium – is slated to open in April with The Diary of Anne Frank. Graced with a generous orchestra pit, the Halton is more hospitable to big splashy musicals (when its sound system responds favorably to our crossed fingers). In fact, this transplanted production of A Christmas Carol, in Julius Arthur Leonard’s adaptation of Charles Dickens’ iconic novella, reminds us how well-suited the old “Queens Road barn” was for such spooky and creepy fare. Not only were the ghosts of Christmases Past, Present, and Future at home there, but so were such confections as Arsenic and Old Lace, Assassins, Blithe Spirit, and To Kill a Mockingbird. The Halton occasionally seemed oversized when You Can’t Take It With You took up residence there at the beginning of Central Piedmont’s current season, and you can imagine how their spectacular 2015 Phantom of the Opera emphasized the grandness of Andy Lloyd Webber’s grand guignol.

Encountering the vastness of the Halton in transplanting Theatre Charlotte’s cozy Christmas Carol, director Jill Bloede has been characteristically resourceful in executing its many daunting scene changes. At times, we could see cast members whisking set pieces off to the wings in a smooth out-with-the-old, in-with-the-new routine. But there were occasions when changes of scenery necessitated a complete closing and reopening of the stage curtains. Veiling the tediousness of that maneuver, Bloede has summoned repeated parades of a small band of merry carolers, coached by Jim Eddings, to cross the stage while the curtains are closed – so you would probably be right in thinking there are more carols sung this year than in Christmases past on Queens Road. My welcome for the carolers on opening night veered toward the unredeemed Ebenezer Scrooge’s grumpy attitude as the evening progressed, yet opening night is destined to be enshrined in Theatre Charlotte lore as the night of the infamous doorknocker scene fiasco.

One of the first indications that Scrooge’s house will be haunted, after a ghostly “Ebenezer Scrooge!” exclamation blows in on the Halton’s sound system, is the brief scene at the threshold to Ebenezer’s home. Here is where Scrooge sees a fleeting glimpse of his deceased partner, Jacob Marley, bringing his doorknocker to life. The precision needed to carry off such a simple scene only became apparent when it went awry. Either the Halton curtains were tardy in arriving at their centerstage spots, where they would fully frame Scrooge’s front door, or the actor who was to lurk unseen behind that door arrived early – and was very clearly seen, garishly aglow. Portraying Scrooge, Hank West seemed sufficiently poised to extemporize while the stage curtains and the lurking Marley came into proper alignment. But the carolers took their cue and entered before West could properly proceed, and the panicked actor behind the door fled. West finished out the brief scene as well he could without any eerie lights beaming through the doorknocker, but the special effect was lost – the only real reason for that scene.

Legions of Theatre Charlotte veterans – and new initiates in years to come – will no doubt keep the memory of this snafu alive for generations, heartily laughing all the more at the incident because it didn’t typify the production. Scenic design by Chris Timmons and lighting by Gordon Olson didn’t expand quite enough to comfortably acclimate at the Halton, nor did the company splurge on smoke or fog effects during its financial woes, which might have deepened the spell of the spookier Marley and graveyard scenes. Don’t expect any snow to flutter down on the vast Halton acreage, either. With balmy temperatures likely to prevail throughout the opening weekend, it’s Beth Killion’s set of period costumes that most successfully instill a chill into the air. 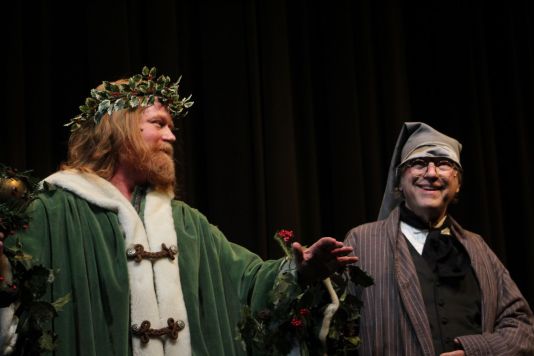 We’ve seen some of this cast before, notably West as Scrooge, Chip Bradley as Christmas Present, and Mary Lynn Bain doubling as Fred’s wife Elizabeth in the present and Belle, Scrooge’s old flame, in the flashbacks. All of these enlarge on their past performances to some extent, maybe West most of all. His meanness is more startling in person than it was in last year’s video version, streamed online, and his sorrow and penitence are also magnified. The graceful arc of Scrooge’s redemption is only slightly bumpier this year with West’s adjustments to the new space, Bloede’s script edits for this intermission-free edition, and a body mic. Projected into a larger hall, Scrooge’s newly minted intentions needed to sound more like settled resolves and less like agonized pleas. Bradley enlarges to a similar degree upon Present’s outsized cheer, the more the merrier in his case – until he issues his climactic admonitions, now sharper in their contrast. Bain seems most content to let her mic do her amplification, but she is stronger this year in the climactic flashback scene when she returns Ebenezer’s engagement ring.

All the newcomers to TC’s Carol are quite fine, a testament to Bloede’s ability to attract talent when she holds auditions. In contrast with the veiled youthful mystery of Anna McCarty last year, Suzanne Newsom brought a nostalgic melancholy to the Ghost of Christmas Past that was quite affecting in its serenity, while Mike Corrigan appeared for the first time as Bob Cratchit – very different with his more muted brand of meekness from Andrea King last year but no less kindly or comical. For richer or poorer, Josh Logsdon and Rebecca Kirby were a fine pairing for the Fezziwigs, Aedan Coughlin doubled well as Young Ebenezer and Ghost of Christmas Future, and Riley Smith brought all the optimism needed for the sanctity of Tiny Tim. With Mitzi Corrigan and Emma Corrigan on board as Mrs. Cratchit and daughter Belinda, there’s plenty of family authenticity around the humble Cratchit hearth – or there will be when Mitzi returns from personal leave due to a death in her real family. Vanessa Davis spelled ably for Corrigan as Mrs. Cratchit at the premiere performance, augmenting her regular role as Mrs. Dilbur.

Assuming that Thom Tonetti was already in character as Jacob Marley during the notorious doorknocker scene, I’ll say his opening night adventures most typified the Theatre Charlotte crew’s tribulations in acclimating to a new space. Marley’s entrance into Scrooge’s home wasn’t dramatized with smoke and lights, and Tonetti didn’t enjoy the benefit of having his prophecies and imprecations magnified with thunderous jolts from the soundboard. During the flashbacks, the actor certainly earned some sort of sportsmanship award, appearing as the younger Jacob opposite the truly younger Coughlin. 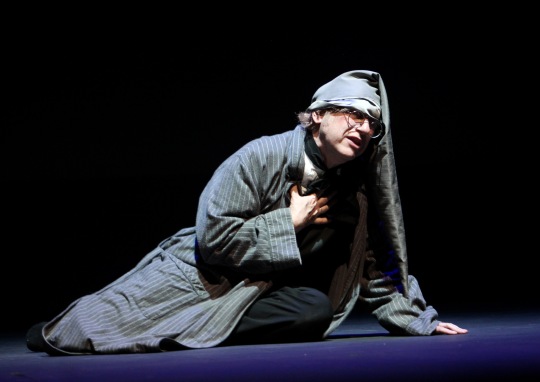 Steadying this production and assuring that its professional polish never deteriorated into community theatre chaos for long, West ultimately triumphed over all missteps and obstacles, bringing us the compelling Scrooge we expect in all his goodness. It’s still a strong story, and 24 of its most ardent Theatre Charlotte believers are moonlighting at Central Piedmont, giving this 87-minute production the old college try. A drama within a drama, to be sure, both ending happily.

Originally published on 12/18 at CVNC.org