Review: Peter and the Starcatcher

As a fairly frequent reader of Dave Barry’s newspaper work, still recycling in Miami Herald newsletters a full 13 years after he left, I’ve developed a healthy skepticism about whether the humorist is capable of being serious about anything. I was optimistic that I might witness a breakthrough back in 2012 when I realized – as I was preparing to review the original Broadway production – that Rick Elice’s Tony Award-nominated Peter and the Starcatcher was adapted from a novel by Barry and Ridley Pearson.

Surely a prequel to Peter Pan, the most adulated and beloved story of the 20th century, would give Barry the incentive to see beyond his next one-liner, especially with a collaborator on board to keep him from jumping the rails. The giddy acclaim buzzing around the show and its five Tony wins for acting and design further fueled my optimism. On a July evening, I entered the Brooks Atkinson Theatre with the wild expectation of seeing a play that artfully, joyfully, and humorously dovetailed with James M. Barrie’s indelible fantasy.

My expectations were badly misaligned with the clever deconstruct of storytelling that I saw. Elice and Barry were equally tone-deaf to the sense of enchantment that Barrie brought to Peter Pan and to the Englishman’s flavorful zest for the primitive. In its belated rush to chime with the story so many of us grew up with, Starcatcher plopped Neverland in the middle of the ocean rather than up in the stars, Peter remained far from the heartless arrogant joy we all remember, and we were left to figure out that Barry’s Molly was Barrie’s Mary, Wendy’s elegant mom.

Unhindered by my former expectations, I found the touring version of Starcatcher far more enjoyable than the Broadway version when it came to Charlotte in 2014. A lot of credit went to the players. There was more chemistry at Knight Theater between Peter and Molly than I saw on Broadway, therefore more heart emerging from Elice’s script, and unlike the fellow who tried so hard to please as Tony Award winner Christian Borle’s replacement, John Sanders seemed to be having a great time as Black Stache, alias Captain Hook.

Yet I must have still been searching for Barry-Barrie links that I might have missed two years earlier, because I found myself even more pleased last week when Theatre Charlotte opened their 91st season with Jill Bloede directing a strong cast in Peter and the Starcatcher. Adept at zany comedy and slapstick, Bloede knows what this piece is – and what it isn’t. She has prodded Dave Blamy to the top of his game as Stache, no less funny here than in his award-winning turns at Actor’s Theatre in The 39 Steps and The Scene, eight years ago and more. How far can Blamy go over-the-top? The climactic amputation scene will be your delightful answer. Part-time foil and part-time torment, Jeff Powell as Smee outbumbles his master, perpetually aflutter and the perfect complement for Blamy, 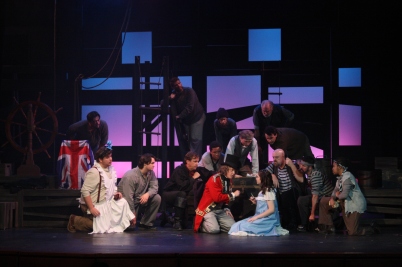 Prime yourself for buffoonish villainy rather than hapless wicked cunning to get the full effect of Blamy Stache. The other wicked captain onstage, Tim Huffman as Captain Slank, takes up some of the slack on wickedness and menace – not a surprise if you saw Huffman in his Queens Road debut in The Crucible. Two piratical seamen have gotten wind of the treasure that Lord Leonard Aster is transporting to India. Getting both vessels to sea obliges us to accept that Lord Aster would want her Molly to sail separately from her father with one of the two treasure chests.

With Troy Feay making his Theatre Charlotte debut as milord, there was plenty starchy British propriety on board one of the ships, and with Johnny Hohenstein crossdressing as Mrs. Bumbrake, there was plenty of bawdy bustle aboard the other. Bowen Abbey woos her with intermittent success as Alf, allowing Hohenstein some comical vacillations – and partially explaining her slack supervision of Molly. Hey, they’re all kidnapped anyway, so Mrs. B has some cover for her negligence.

Also kidnapped – sold into slavery, if you want to get picky – are three orphan boys whom Molly befriends. By the process of elimination, we can figure out that the urchin with no name, played with a soft chip on his shoulder by Patrick Stepp, will eventually emerge as Peter. In the spirit of adventure, Molly seeks them out in the bowels of the pirate ship, and in the spirit of Barrie’s Wendy, she takes on the burden of educating the Lost Boys. Fifteen-year-old Ailey Finn is more than sufficiently precocious to portray both the tomboy and maternal dimensions of Molly. Why not? She was Rose of Sharon nearly a year ago in Theatre Charlotte’s Grapes of Wrath!

Stepp and Finn both render their roles like they’re on the cusp of puberty, so their mutual awakening comes moments before they must part forever. With Bloede at the helm, this is the most poignant ending I’ve seen in any Starcatcher production. 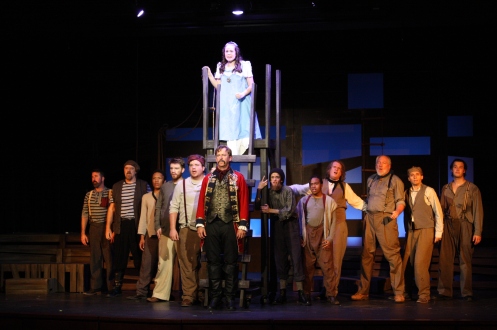 We seem to get there at warp speed, even though Bloede manages to sharpen Captain Slank and Mrs. Bumbrake more than I’ve previously experienced. Yet the sensory bombardment is so constant that I can admit without shame that, while I can tell you that Jesse Pritchard and A.J. White played the orphans creditably, I can’t say for sure whether Prentiss was the ornery one or Ted. Likewise, a peep into Wikipedia was necessary to nail down which character wooed Mrs. B.

Somebody remarked to me in the lobby at intermission that Peter and the Starcatcher is like children’s theatre for adults. If you’ve seen ensembles in children’s productions who break away from their characters and directly narrate to the audience, you’ll see the truth of that comment hand-in-hand with Elice’s deconstructing mischief. We are taking in a lot of information here. Listening to the players is often a more reliable indicator of where we are than following the changes in Chris Timmons’ spare set design, nicely coordinated with Gordon Olson’s lighting.

Keeping pace with all that happens is hard enough without worrying how Elice’s play connects with Barrie’s. So don’t. It was only on my third go-round that I realized how important the sound designer’s contributions are to making Starcatcher work. No sound designer is listed in the Theatre Charlotte playbill, so I’ll cite Ben Sparenberg and Rick Wiggins, listed jointly as light and sound board operators. Bloede and her cast certainly keep them busy, and I wouldn’t be surprised to learn that both of them might be cuing sounds together when tensions intensify.

You won’t find much enchantment in this 91st season launch, but there’s some magic aboard one of the ships when we land in Neverland. The journey is roaring good fun at its best, and it’s running with professional polish and precision.