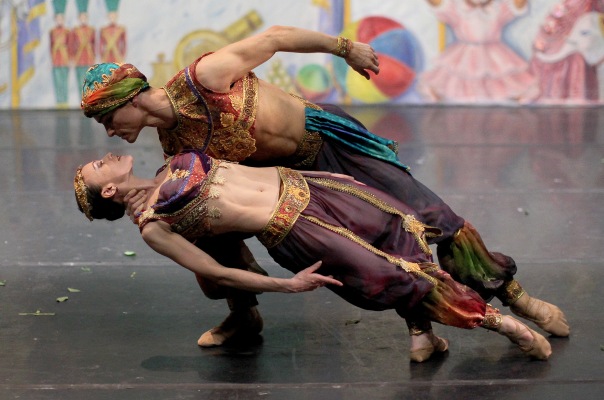 Now in its 24th annual North American tour with traditional Russian favorites, the Moscow Ballet is a massive enterprise to contemplate. Three separate tours are currently crisscrossing the US and Western Canada with their Great Russian Nutcracker. So on December 11, for example, when the Central tour came to Ovens Auditorium in Charlotte, the Eastern tour was in Syracuse, NY, and the Western tour was in Albuquerque, NM. And what about back home? We can’t imagine that the cupboard is bare back in the Motherland, where the puissant Putin rules.

So after seeing the new $1 million Charlotte Ballet remount of Tchaikovsky’s holiday favorite, I was curious to see how the Great Russian would compare – with Moscow’s resources and talent spread so far and wide. The negatives manifested themselves pretty quickly. You can’t replace the curtains with proscenium-spanning art at over 100 theaters when you’re only performing there just once, with few exceptions, and you can’t tour with three symphony orchestras playing the beloved score live.

Nor can you take over 200 schoolchildren on tours that last over a month – 54 days, in the case of the mammoth Western tour. This is where the Great Russian also becomes the friendly Nutcracker, for the Moscow Ballet teamed with Gay Porter’s Charlotte School of Ballet to fill over 70 roles: Party Children, Mice, Snowflakes, Snow Maidens, Snow Sprites, and backup dancers for the Act 2 divertissements by Moscow’s Spanish, Chinese, Russian, and French soloists.

So on any given night, over 200 costumes may be worn by aspiring dancers who hail from the towns where Moscow Ballet performs. Talk about outreach. Over 5,000 young dancers are getting to rehearse, perform, and wear those wondrous costumes in through Moscow’s Dance With Me program. Better than Halloween, as the Donald would say, believe me.

The negatives I’ve spoken of soon recede. I didn’t have to send up a flare to alert the people in the soundbooth that the music was turned up too loud, but I did wish it were potted down sooner. When the curtains parted at Ovens, Moscow’s newly revamped scenery, with new designs by Carl Sprague, was definitely in the same class as Charlotte Ballet’s, with a faux proscenium as ornate as the real one I’d seen the previous weekend.

There weren’t as many scene changes as Charlotte Ballet lavishes on their production. The sleigh that carries Masha – better known to us as Clara – to the Land of Peace and Harmony remains earthbound instead of flying, and did the parade of playful 10-foot-high puppets ballyhooed in the program synopsis really escape my notice? Don’t think so. Most of these beasts were depicted on the imposing backdrop in a style vaguely reminiscent of Henri Rousseau.

Other details that distinguished this Nutcracker from those I’m accustomed to did not escape detection. Though there wasn’t liftoff for the sleigh, it was conveyed to Peace and Harmony by “Ded Moroz,” Russia’s Father Christmas, and Snow Maiden “Snegurochka,” both resplendently attired in Carolina – um, cerulean – blue costumes newly designed by Arthur Oliver. Uncle Drosselmeyer was a jovial gift-giving enchanter, still sporting a cape but more like a ringmaster or a game show host. And imagine, the Sugar Plum Fairy and her Cavalier never appear! Instead, it’s Masha and the Nutcracker Prince who dance the grand pas de deux.

After receiving so many gifts, Masha and her Prince present their dance to – the flowers that just waltzed for them? The synopsis is mum on that point, but Ekaterina Bortiakova is pure delight as our heroine, most adorable when does her simple tippy-toe shtick in the “Dance of Sugar Plum Fairy,” as light as the celesta cuing each step. She’s graceful, demure, vivacious, and youthful enough for us to imagine Nutcracker as a coming-of-age story. Andrey Batalov brings star quality of his own to the role of the Prince, definitely a cavalier partner when he sheds his Nutcracker headgear and brocaded waistcoat, most memorable when he whirls around the stage in his uptempo solo.

Choreography by balletmaster Stanislov Vlasov adheres to the manner of Tchaikovsky’s original collaborators, Lev Ivanov and Marius Petipa, most challenging when we arrive at the Act 2 showcases. Casting in these key spots is predictable, since only one pair of partners is listed for each of the divertissements, but most of the major roles we see in Act 1 are double-cast, including Masha and the Nutcracker Prince. Chiefly worthy of mention here were Sergey Dotsenko, a dashing Uncle Drosselmeyer in his florid purple cape, and Meievsky Vsevelod as the furtive and menacing Rat King.

Four of the six couples who partnered in Act 2 etched themselves vividly in my memory. In the snowy transition between the Stahlbaums’ Christmas soiree and Masha’s final destination, Anna Radik and an unmasked Dotsenko were the most sculpturesque of the couples as the Dove of Peace, each one of the silvery dancers bearing one of the bird’s luxuriant 10-foot-wide white wings, another new Oliver design. Perpetually leaning left with index fingers pointing upwards, Kseniia Stukalenko and Vladyslav Stepanov were the most charming and amusing pair as the Chinese Variation. 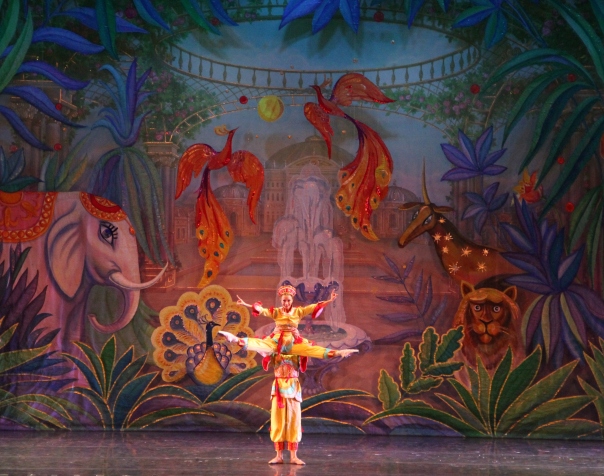 Contrasting marvelously – again – with the perky Chinese, Radik and Dotsenko returned as the smoldering Arabian Variation, with Radik executing snaky contortions that were unrivaled by anything else we saw. Clearly this was the most sensuous couple of the afternoon, but Veronika Melnyk and Michail Botoc as the Russian Variation took us to another dimension – sheer athleticism. Botoc, in particular, astonished with a series of leg-split jumps, a string of somersaults that spanned half the stage, and various gymnastic moves, effectively stealing the latter moments of the show. He even persisted during the curtain calls, unfurling the famed Cossack Kazatsky squat dance, more than sufficient reason why Putin wishes to recover the Ukraine.

The couple sitting next to my wife and me have a daughter who will be dancing with this tour when it arrives in Detroit. They came to Charlotte because one of their kin was a Charlotte School of Ballet student in a similar role at this performance. I could see that they had no regrets at all about making the trip to see a Mouse. Very likely, they and their daughter view the Great Russian Nutcracker as the experience of a lifetime. From the ovation and the swells of applause that spontaneously broke out all over Ovens during curtain calls, it was obvious that hundreds of non-relatives felt the same