Graphic novelist Alison Bechdel’s Fun Home grabs – and sustains – our attention in large measure because the title is a misnomer, the nickname given by Alison and her siblings to the family business, the Bechdel Funeral Home. Yet as the story unfolds, with its cargo of closeted homosexuality, sexual molestation, and suicide, we realize that Alison is stressing – and cherishing – the fun times she had with her siblings and her troubled dad. Sweetened by Lisa Kron’s stage adaptation and juiced by Jeanine Tesori’s music, the fun in Fun Home gains further momentum.

It keeps rolling in the Actor’s Theatre of Charlotte production at Queens University with lively stage directing, choreography, and preteen actors playing the young Bechdel pranksters. Aiming in that enlightened direction, set designer Dee Blackburn starts with the thrust stage configuration I saw at Circle in the Square for the Broadway, but she departs from the funereal darkness that characterized the New York run and the national tour. Abetted by Hallie Gray’s lighting design, Blackburn gives us the kind of bright home that Alison’s neat freak dad might fuss over.

Or not. We also get darkness when Bruce, Alison’s dad, summons her to assist him in prepping a cadaver – and on numerous occasions when we leave the Bechdel house. Bruce’s nocturnal rambles, creepy and predatory, might occur far away on a family trip or in his car cruising the neighborhood for prey. If you’ve seen Fun Home before, you might find Bruce’s rambles more chilling, since his household isn’t an Addams Family lookalike. Bechdel’s original subtitle, “a family tragicomic,” wickedly sets the tone.

The most fun is when the three Bechdel kids do the big “Come to the Fun Home” song, pretending to cut a TV commercial for the funeral parlor, with choreography by Tod Kubo that captures all the goofy giddiness of the previous productions I’ve seen. Both Allie Joseph and Ryan Campos distinguished themselves at the start of this season in Children’s Theatre of Charlotte’s admirable Matilda, while Donavan Abeshaus has flown a little more under the radar, appearing as the young anti-hero in Bonnie and Clyde at Matthews Playhouse in February 2018. They make a fine set of Bechdel sibs now, though Joseph once again draws the plumiest role. 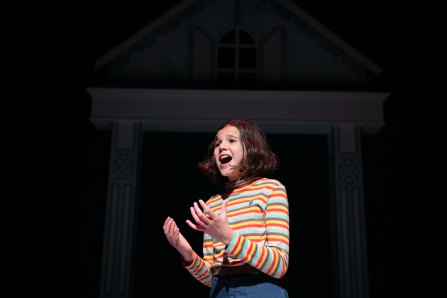 Joseph is so brash and brilliant as Small Alison that she steals a little of the thunder from Amanda Ortega’s somewhat understated Medium Alison, the collegian who discovers her true sexuality at Oberlin and comes out as a lesbian. Ortega’s “Changing My Major” (to Joan, her first lover) was still an uproarious showstopper for those at opening night encountering it for the first time, though it brought nothing fresh that I hadn’t seen, but Lisa Hatt as our narrating Alison did offer something new, besting even the Tony-nominated Beth Malone as our storyteller.

Maybe director Chip Decker believed she could be more than what she was on Broadway and on tour, for liberating Hatt – just by freeing her from the nerdy sketchpad she perpetually carried – is likely the foundation for all the Hatt achieves. Even when focus is elsewhere, on Bruce or one of the other Alisons, Hatt’s reactions matter, and her delivery of the climactic “Telephone Lines” is star quality. Yet there’s less of a feeling that this Alison has it all worked out after coming to terms with her sexuality and the fact that, as a graphic novelist, she isn’t going to join Faulkner and Hemingway in her English teacher dad’s pantheon. Hatt strikes me as a less confident Alison, still searching.

Hatt’s take on Alison allows Rob Addison as Bruce to be a little less formidable – more lifesize – than Michael Cerveris was on Broadway. A little more nuance helps because the ground has shifted somewhat since 2015, when Fun Home premiered, under the issues that Alison’s dad straddles. Though nothing excuses Bruce’s sexual predatoriness, fears of exposure and disgrace as a homosexual may be prime reasons why Dad is so rigid, regardful of others’ impressions, and so virulently bossy. You can believe it when Addison lets down his guard and plays with Young Alison at the start of Fun Home, and you can eventually see why this might be so atypical of Dad that our narrator would cherish the memory.

Of course, the tortured and torturing Bruce can have more empathy with Alison – and be more grimly protective of her – than Helen Bechdel, her mom, and Lisa Schacher delivers a nicely nuanced portrait. Submissive, disapproving, and beneath it all, the caretaker, with a self-loathing to match her husband’s. Maybe a little more nuance from Sebastian Sowell as Joan to go along with her invincible cool would help me see why everyone, especially Medium, is so impressed with her. You can see, however, that a medium-energy Medium Alison is attractive to her.

Rounding out the cast as a couple of Bruce’s trespasses, Patrick Stepp shows enough self-awareness as Roy, the yard boy that Bruce plies with drinks – while Mom is elsewhere in the house! – to let us suppose that all this isn’t as surprising to Roy as it might be to us. Or unprecedented. In a scene that Alison isn’t narrating from her own experience, giving Dad a small benefit of the doubt is probably the perfect path to take. A little more sugar – and a soaring flight of fancy – will help Alison bring an uneasy but upbeat closure to her engaging memoir 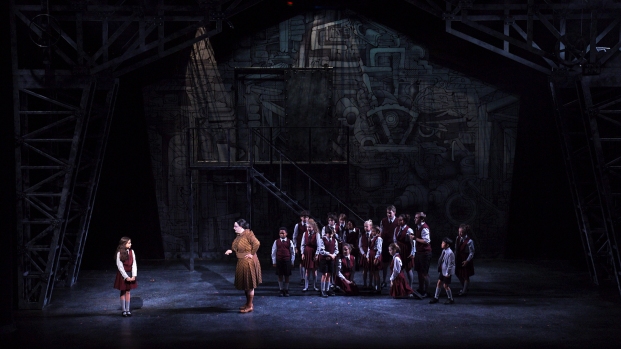 The time lag between what opens on Broadway and what tours at Belk Theater has narrowed in recent years. Likewise, the gap between when the tour comes through town and when local companies get their hands on Broadway properties has also shrunk. With the arrival of Matilda The Musical at ImaginOn last weekend just two years after it played Belk Theater, it became apparent that CPCC Summer Theatre, Theatre Charlotte, or Children’s Theatre can expect to mount Broadway hits that are just as fresh from their New York runs as the off-Broadway sensations that Actor’s Theatre brings us.

Even with this slimmer interval, I fear that Roald Dahl‘s Matilda isn’t aging gracefully as a children’s story at McColl Family Theatre. It returns a bit awkwardly in a year when children are cruelly and inhumanely seized as pawns to discourage asylum seekers from Latin America. You might feel more comfortable with this story than I did just two days after I’d watched a Supreme Court nominee opt for yelling and indignation as his go-to defenses against credible accusations of sexual assault in sworn testimony on Capitol Hill.

I’m not sure which aspect of the Saturday afternoon performance disturbed me more. Was it director Adam Burke and his star, Tommy Foster, conniving to make the evil Miss Trunchbull more realistic than she had been in 2016; or was it the parents in the audience, bringing their anklebiters to the show and ignoring recommendations that it was suitable for 6-and-up? I was surprised – and slightly reassured – when so many stayed after intermission but not at all shocked when the adults sitting next to us fled.

Foster had some comical tricks up his beefy sleeves as the hammer-throwing harridan, turning a couple of unexpected cartwheels and almost executing a split. But Trunchbull’s implacable cruelty sometimes verged on rabid, when she unveiled all the “chokey” dungeons reserved for misbehaving and disobedient students at her school or when she pulled the ears of one cowering student about a foot away from his head. Neat technical effects, but perhaps too realistic for comfort.

Dahl wrote his Matilda in 1988, a decade before Lemony Snicket’s Series of Unfortunate Events took off – and before some of the edgier “anti” musicals like Urinetown began to invade Broadway. So his macabre sensibility here became more and more in tune with the times. With all its demonic cogs and gears, HannaH Crowell’s set design (fiendishly augmented by Kelly Colburn’s projections) brought home to me how Dahl’s sensibility had morphed during the quarter of a century following Willy Wonka and his iconic chocolate factory. Nothing particularly sweet here.

Matilda Wormwood certainly had more natural talents and gifts than Charlie Bucket, who snagged the lucky ticket to meet Wonka and taste his chocolate wonders. She is a precocious reader, which disgusts her dimwit parents and astounds Miss Honey, her timorous first grade teacher. As a storyteller, she holds the local librarian spellbound. Pitted against the fearsome, sadistic Trunchbull, Matilda turns out to have a combination of psychic and telekinetic powers that bring her victory – wielded with a sly naughtiness.

You need more than Orphan Annie pluck to play this role, and Allie Joseph has it. She nails Matilda’s signature solos, “Naughty” and “When I Grow Up,” and she sparkles in the spotlight – Colburn’s projections going wild behind – telling her four part “Acrobat Story” to Mrs. Phelps, the librarian. There’s a touch a grim determination in Joseph’s naughtiness that nicely counterbalances the added malignity that Foster brings to Trunchbull. Without too much suspension of disbelief, Joseph also passes for a first grader.

Also supplying counterweight to Trunchbull’s regimentation and brutality are Matilda’s other tormentors, her nutball parents. Caleb Sigmon gets to do the heavier comedy lifting as Mr. Wormwood, loudly dressed by costume designer Magda Guichard, victimized by Matilda’s vicious pranks, and cuckolded by his wife. A crooked used car salesman way beyond his depth in attempting to hoodwink Russian mobsters, Matilda’s dad deserves every indignity that comes his way, especially when he tears up his daughter’s library book. Yet Sigmon retains a wonderful energy amid all Dad’s atrocities, vicissitudes and cluelessness.

Wrapped up in her competitive ballroom dancing – and her sleazy partner Rudolpho (the lithe Paul Montagnese) – Matilda’s mom doesn’t realize she’s nine months pregnant with an unwanted second child when Matilda is born. That’s a high level of stupidity to sustain, but Lucianne Hamilton is more than equal to the task as Mrs. Wormwood, particularly when she schools Miss Honey on her philosophy of education.

Absorbing this lecture as well as Miss Trunchbull’s tirade, Miss Honey earns the right to sing “Pathetic” as her signature song, yet Bailey Rose builds Honey’s strength on stoical acceptance and self-awareness, her warmth toward Matilda counting for far more than her passivity. More comical appreciation comes from Janeta Jackson as Mrs. Phelps, the librarian who listens so raptly to Matilda’s acrobat saga. 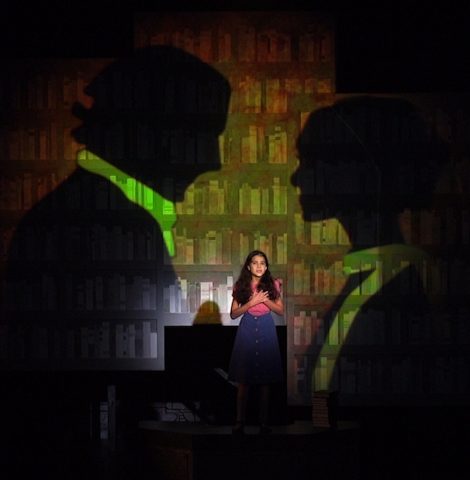 Dennis Kelly‘s adaptation of Dahl’s novel is admirably intricate and well-crafted, but I find myself less impressed with Tim Minchin‘s music and lyrics, which might be more palatable with the vitality of Annie or the wit of Avenue Q. You still need to listen – carefully – to the cast album to decipher what the kids’ choruses are singing. Whether the older kids are rattling their cages in welcoming the first-graders on their first day or Matilda’s class is celebrating victory over Trunchbull, the music sounds a bit savage, as if Annie and her fellow orphans were on a bad acid trip. The transition from Belk Theater to the smaller McColl seemed to augment the abrasiveness.

Yet some of Matilda’s classmates do distinguish themselves. Calvin Jia-Hao Mar is consistently adorable as Nigel, who spends much of his time cowering or fainting whether or not Trunchbull is persecuting him. Ryan Campos is a more formidable martyr as the heroic Bruce, a young glutton who steals a piece of Trunchbull’s chocolate cake and is forced to eat the whole thing as his punishment. And though I can’t tell you why we’re bothered with Matilda’s best friend Lavender, Jeannie Ware made her charmingly self-important when we returned from intermission.