Review:  The Cookers at Spoleto

After a pandemic-induced hiatus that canceled last-year’s 17-day event, Spoleto Festival USA is back in Charleston for 2021 – but not all the way. Opera, symphony, and choral presentations remain in lockdown, Spoleto’s indoor jazz venue remains shuttered, and the long-anticipated premiere of Rhiannon Gidden’s Omar remains on hold until 2022. The festival’s general director, Nigel Redden, who has announced that he will be stepping down in October after a 26-year stint at the helm, admitted that the efficacy of COVID vaccines and the speed of recovery had wrong-footed Spoleto in their scheduling.

The only indoor events at Spoleto this year were The Woman in Black, on loan from its epic 30-year run in London’s West End, and the daily series of lunchtime chamber music concerts at historic Dock Street Theatre, always the bedrock of the festival. Live dance and music events are otherwise outdoors. With necessity as their mother, a whole brood virtual events, presented online or on your cellphone, has been invented.

Deep in the heart of Trump Country, Spoleto does impose social distancing in arranging seating, and they ask ticketholders to be properly masked until they are isolated in their seating pods. These hardships didn’t seem to dampen the rush on the festival box office, creating a quandary for omnivores like me. Press comps were unavailable for the first 12 chamber music concerts, forcing us to miss the opening weekend with its combo of New Orleans celebrations on successive nights at The Cistern. The first of these featured the Preservation Hall Jazz Band and the second, a tribute to the life and music of multi-instrumentalist Danny Barker, offered Catherine Russell as its featured vocalist. 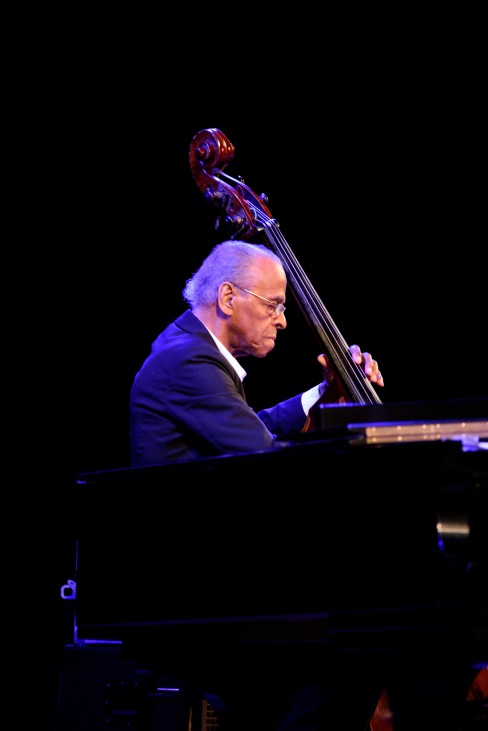 Since I had reviewed performances by both Preservation Hall and Russell in recent years, I punted on the first weekend and opted for The Cookers on the middle weekend of Spoleto, when access to the chamber music series would also open up. Allowing us to catch up with such heavyweights as George Cables, Cecil McBee, Eddie Henderson, and Billy Hart, all of whom I knew well from recordings but had never seen live, The Cookers were anything but a consolation prize. Then there was also an opportunity to reconnect with Billy Harper and Donald Harrison, two sax greats whom I hadn’t seen on a bandstand in well over 10 years.

If the weather cooperated.

Over and over, I had checked on the forecasts. No wavering from predictions of thunderstorms slated to plague that second weekend – and no contingency plans, the press office told me, if the Saturday night concert were to be rained out. It was a nail-biter, especially after what happened to us on Friday night. My wife Sue and I were nearly finished with dinner when my iPhone beeped with a text telling me that Ballet Under the Stars had been cancelled. By then, rain was pouring down so ferociously that, after paying our bill, we told our waitress to open a dessert tab.

We could be thankful that we made it back to our hotel that night, because the floodwaters near where we had parked reached the tops of our tires at one of the intersections. We soon passed police barricades barring traffic to the streets we had just left moments before.

Ominous clouds loomed overhead as we walked past The Cistern on the night of the concert. Spoleto crew were obviously no more confident than we were. Tentpoles surrounded the bandstand where The Cookers were scheduled to perform, with a white carnival-like canopy protecting the electronics. We speculated that maybe they would perform in a light rain and let the audience fend for themselves. Or maybe The Cookers were merely having a cookout.

As we took our seats underneath one of The Cistern’s live oaks, the stage crew moved the tentpoles and canopy off the staging platform minutes before the 9:00pm start. Apparently, local radar had given the band a green light. But for how long? We’ve seen scenarios – including just two years ago, when Carla Bley brought her trio to The Cistern – when festival officials, citing an oncoming storm, forced the performers to curtail their program.

Fortune smiled on us, for the band not only stayed onstage for the scheduled hour-and-a-quarter, they overstayed, lingering longer than 90 minutes. Some might also say they overcooked, for these were mostly searing, incendiary performances. The only mellowing agents all evening long were bassist McBee, who merely smoked on his solo in his own “Peacemaker,” and trumpeter David Weiss, organizer of the group and its spokesman, whose sizzling hot solos actually seemed to cool things down amid this torrid zone of horns. Tenor saxophonist Harper, brooding by the keyboard near Cables and playing a gruff, disconnected cadenza, clued us into how it would be. This turbulence was before Harper joined the other horns downstage for the four-barreled launch of his “Call of the Wild and Peaceful Heart,” the title tune of the band’s most recent release. Within moments of this brash and brassy opening salvo, Harper seemed to have the stage all to himself, totally possessed as he unleashed a snarling, squealing, epic rant that announced he was ready for more than a cutting contest – he was geared-up for a knife fight.

When Henderson returned to his mic with his trumpet, and when Harrison followed with his alto sax, each man soloed as if Harper’s gauntlet had been tossed at him, dueling with the tenor great and with each other. After Henderson answered Harper’s fury with some awesome flame throwing, Harrison didn’t flinch, firing off a face-melting solo of his own. Arrangements for this and three other Cookers tunes from past CDs were looser live than in their studio versions, encouraging all this calculated fury and derangement. If you caught the body language of whoever was blowing and the next man up, you were hip to the fact that there was no ironclad limit to the solos.

With relative subtlety, the rhythm section of Cables, McBee, and Hart seemed relegated to timekeeping toward the rear of the bandstand as the men with the horns jousted in the foreground. Like McBee in “Peacemaker,” both the pianist and drummer got their shots. Cables set up his own composition, “The Mystery of Monifa Brown,” which was the only tune in the set not previously recorded by the septet. On the Cistern stage, the group totally transformed the tune from what it was on the 2016 Songbook album with Cables’ trio. Not only did the addition of the horns bring fresh fire, Cables himself thundered in a way that came far closer to the sound and percussive fury of McCoy Tyner. 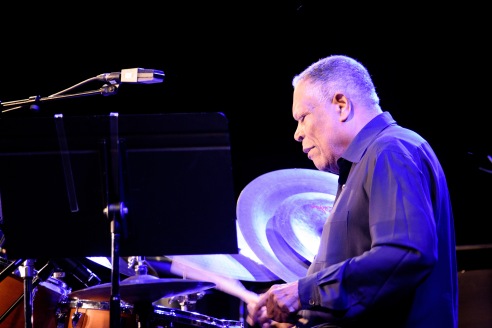 As often happens in live concerts, drummer Hart got his chance to shine in the finale, Wayne Shorter’s “The Core,” after yet another searing peroration from Harper’s tenor. The sizzle of Billy’s cymbals and the barrage on his toms left scorched earth in his wake.

Paradoxically, Henderson may have received the most precious gift of the night as the Harper tune of the set, “If One Could Only See,” gave the trumpet ace an opportunity to slow the tempo – an oasis of meditative calm amid the livid flame-broiling at The Cistern. For many in the crowd, the change of pace may have come as a revelation, but for those of us who have followed the group since their genesis in 2010, it was a reminder that The Cookers can still deliver when they turn down the heat.

Jazz at Spoleto culminates this weekend with Jason and Alicia Moran’s co-production, Two Wings: The Music of Black America in Migration. Instead of Reconstruction, the Morans will be focusing on the music of 1910-1970 – and the key moments that forged so much of modern American music afterwards. Aside from the Morans, Wycliffe Gordon and the Imani Winds are among the talents gathered under the live oaks at The Cistern for this musical narrative.