Havana has never been the homeland of the Jewish people. Yet as we quickly learn in Tropical Secrets: Holocaust Refugees in Cuba, now streaming from Children’s Theatre of Charlotte, it was often more hospitable to Jewish refugees fleeing Nazi oppression, terror and genocide than most other nations – including the USA. If that surprises you, imagine how 11-year-old Daniel felt when he made this discovery in 1940.

In the wake of the infamous Kristallnacht terror across Germany, Daniel’s parents rush him onto an ocean liner bound for New York, promising to meet him there. The ship isn’t allowed into the harbor. They sail north. Knowing there are Jews on board, the Canadians also turn them away. Young Daniel, who was holding his grandfather’s hand when rioters shot him down on Kristallnacht in the middle of the street, is learning some of the cruelest lessons of the world on his own, cast adrift from his family.

Interestingly enough, Margarita Engle’s story, adapted for the stage by L M Feldman, is almost equally about the 10-year-old Paloma, nee Maria Dolorosa. From the outset, her problems are paralleled with Daniel’s. Paloma’s mom abruptly decides to leave Cuba for Europe. Needing to become closer to her dad in the wake of Mom’s abandonment, Paloma finds herself turned away. Seems like an unfair comparison at first, but Engle constantly asks us throughout this new 75-minute drama to re-examine our perspectives and our sense of proportion.

Moral certitudes are questioned during the turmoil of World War II as we watch Daniel acclimate to Cuba while still holding out hope that his parents will find him – or that he will find a way to New York. A huge flip in sentiment and loyalty happens across Havana when news reaches the island that Pearl Harbor has been bombed. Instead of marking him as fodder for the horrific Nazi deathcamps, the Yellow Star that Daniel had been forced to pin on his shirt back in Munich now becomes the badge that prevents him from being arrested as a German spy.

As with many children’s classics, kids perceive basic truths more readily than their elders. Paloma’s father, known across the island as El Gordo, is the decider when it comes to which ships are allowed to dock in Havana and which are turned away. He tries to explain to little Paloma that he makes his decisions pragmatically rather than on principle. “The world runs on business!” he proclaims with conviction. Paloma looks her dad straight in the eye and tells him, “The world runs on kindness!” Engle’s kids also have depth, as when Daniel informs Paloma, “In Germany, you have to wear a star on your shirt, so everyone can know what you are and hate you for it.” 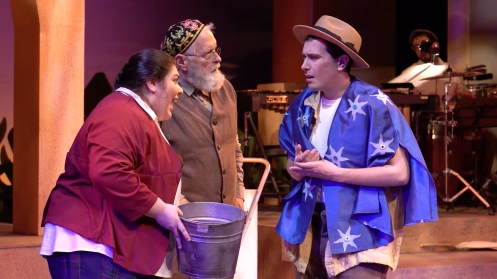 Adults here aren’t perfect role models chiefly because of their practical struggles to survive and thrive. With most of the world turning the Jews away, El Gordo naturally feels pressure not to open the floodgates. Yup, immigration issues! And though Daniel’s mentor, David, staunchly wears a brightly embroidered yarmulke with pride, he also bends to practicality, peddling his ice cream in his little pushcart on the Sabbath. When Jews are suddenly perceived as friends and Germans suddenly become loathsome, suspicious, and targeted for arrest, David abruptly veers to the other end of the spectrum, opposed to allowing any foreign ship to dock in Havana until the war is over – even if Daniel’s parents happen to be on board. El Gordo, on the other hand, stands fairly firm – except for raising the price of entry.

In the shifting mists of these patriarchs’ outlooks, blown by the winds of war, Engle’s Havana takes on some of the ambiguities of Casablanca. We aren’t on the same exalted levels of politics, decadence, or romance, but you may find yourself identifying more deeply with the everyday humanity of her people. You may also experience more keenly the anguish of survivors who are left in suspense for months and years about whether those dearest to them are still alive – and empathize more keenly with those who are wracked with memories of those who have died.

Most poignant, the kids rise to heroism in acting out their natural beliefs when, after the universe flips with Pearl Harbor, they encounter a Jewish mother on the run. Why would Miriam, a German Jew, be so terrified now? Because her only living relative, daughter-in-law Marta, is a Christian. For Daniel and Paloma, it is axiomatic that both are equally entitled to live in peace. Marta and Miriam, on the other hand, wrestle with the question of how fully they should describe to their rescuers the full details of the horrors they have left behind.

Thankfully for parents wondering whether Tropical Secrets might become to heavy for their youngest, Engle takes us to precipice without jumping over. There’s plenty for her to show us about kids conquering the language barrier and bonding, and there’s plenty for the kids and their elders to teach us about Judaism, Yiddish, and carnival. Helping Feldman transform Engle’s poetry into engrossing drama, stage director David Winitsky has made a welcome return to Charlotte after a year’s absence, having hosted the Charlotte Jewish Playwriting Contest at Shalom Park for the previous three seasons.

Two dramaturges, Carmen Pelaez and Wendy Bable, helped him and his cast get the history and the cultures across accurately. Anita J. Tripathi’s scenic design radiates hacienda elegance, but it was Robyn Warfield’s lighting that filled out the atmosphere and took us beyond the city when the story needed to travel, while Magda Guichard’s costumes deftly differentiated between the nationalities and the social classes.

Most gratifying after so many months of deprivation, isolation, and lockdown was watching such a professional all-adult cast captured so well in immaculately recorded audio and video. Because this world premiere was immediately headed for film, where kids are always kids, Adrian Thornburg and Isabel Gonzalez had the steepest obstacles to overcome as Daniel and Paloma. Thornburg’s path was to shrivel himself inwards with Daniel’s sullenness when we first see him, though Winitsky might have eased off a little on all our hero’s resentful turning away. Gonzalez’ regression moved in the opposite direction, outwards with an excess of energy and often with open arms. In less than a minute, I found myself returning to a familiar theatre world, where adults can pass as kids and be as tall – or taller than – their parents.

In Europe, on the ocean liner, and in Cuba, four other actors played multiple roles, at least one of them memorable for each player. Tom Scott as David had the dignity, tenacity, and flexibility of a time-tested Jewish survivalist, stretching himself more than usual to immerse himself in the ice cream peddler, while Frank Dominguez was stubbornly set in his ways as El Gordo, professionally urbane, gradually realizing how off-putting his pomposity has become. Paula Baldwin and Margaret Dalton complemented each other nicely as two different tandems, first as border guards who stole Daniel’s boots and broke his flute, later as the fugitives, Miriam and Marta. Baldwin as the suffering Miriam could be the most fearful, grieving, and overprotective, but Dalton as Marta delivered the best retort: “When things are ugly, you cannot help but speak it ugly.”

Maybe the best secret in Feldman’s adaptation is the time taken to breath in the tropical air. Percussionist Raphael Torn and pianist Charlene Thomas bring the tang of rhythm and music to the street a couple of times. When Paloma takes Daniel to the festival, when she takes him to the beach at night, and when she brings him back to music again and again, fresh air infuses our hero’s life as he accepts the kindness of a friend. He tacitly acknowledges that after the bombs of world war and Kristallnacht, there is balm in Cuba – in the oranges, the coconuts, the drums, the Afro-Cuban beat, and in carnival.