Wu Han and David Finckel, longtime artistic directors of The Chamber Music Society of Lincoln Center, are among the world’s greatest ambassadors of chamber music – with talents and personalities worthy of their mission. I’ve seen them together in live performance on at least three occasions in past years at the Savannah Music Festival, and before those encounters, I had seen Finckel play without his wife at the Aspen Music Festival in epic two-night traversal of the Bartok string quartets while he was still the cellist with the Emerson String Quartet.

I’m still hoping to see them together at the Music@Menlo festival, which the New York-based couple established in California back in 2003, at some future date when air travel is no longer a game of Russian roulette, provided that the premises haven’t been reduced to cinders. In the meantime, I was delighted that Duke Performances was offering a virtual opportunity to see Han and Finckel online in a concert of works by Beethoven and Brahms – and curious to see how these elegant performers would handle the technical side of their webcast.

The video setup was fairly inconspicuous as the power couple opened with Beethoven’s pioneering Sonata for Cello and Piano in F Major, the first of two pieces written in 1796 for no less than Friedrich Wilhelm II, the cello-playing Emperor of Prussia. It was Finckel, in the charmingly shared introductory remarks, who pointed out that this was the first piece written for these instruments that placed the cello on equal footing. Three unseen cameras faced the players as they began the Adagio sostenuto against a bosky backdrop of what appeared to be the couple’s back porch, looking out on a brightly-lit forest that filled up nearly all we could see through the generously-sized sliding glass doors of their studio. Sound was warm and rich as Finckel immediately took the lead, Han helping to build the tension of the movement until we reached its crest.

Around that point, when we verged on the seamless transition to the middle Allegro, without our having seen a cameraman silhouetted against the burnt-out background, there were suddenly close-up shots of Han from a camera in the opposite direction that somehow didn’t expose any of the three camera placements that had already been deployed. When video was handed back to the frontal cameras, I finally noticed what looked like an iPhone mounted inconspicuously on a slender tripod just beyond the Han’s Steinway, roughly parallel with her left ear.

This was an excellent vantage point to watch Han’s light touch as she sped the tempo into the brighter Allegro and its sunnier melody, the most dramatic moment of the linked movements before they concluded. Finckel repeated the catchy melody with less filigree but no shortage of merriment and gusto. Overhead shots, which began to proliferate toward the end of the Allegro, revealed a dangling microphone less than a yard above Finckel’s right shoulder, almost directly in line with his bowing elbow.

With Finckel performing the Cello Sonata without any visible score and his microphone mostly out of sight, the look was very clean, particularly since Han was using a tablet to read her part, obviating the need for a page-turner. The two shared a dramatic cadenza, Finckel supplying most of the gravitas, before the rousing, effervescent finish. The sonata’s finale, a Rondo marked Allegro vivace, initially sounded anticlimactic in the wake of the middle Allegro, which is more than twice as long. Finckel and Han gradually stirred up its strength and intensity without sacrificing its essential merriment. 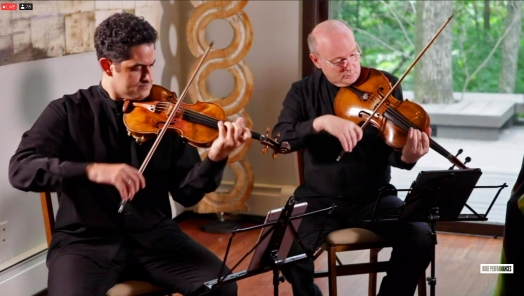 After the ensuing blackout, violinist Arnaud Sussmann and violist Paul Neubauer materialized, bows at the ready, for Brahms’ Quartet for Piano and Strings No. 1 in G Minor, firmly settled in the space formerly occupied by Finckel, while the cellist crossed over to the right side of our screens. Camera positions also changed. One placement put the newcomers exclusively in view, and the cellphone near Han was repositioned to give us a more frontal – and greatly improved – view of the keyboard. Lighting was also enhanced: the background greenery was not so nearly bleached away by the sun and additional indoor light insinuated itself upon the string players.

While it was natural to see Han and Finckel performing unmasked as a duo, I was a little surprised to see no adjustment with the arrival of Sussmann and Neubauer, who also played unmasked. Further decluttering the presentation, both the violinist and the violist mounted tablets on their music stands, so I never saw any pages turning. Finckel alone was old school, with a score that protruded from the right side of his stand, presumably paper. 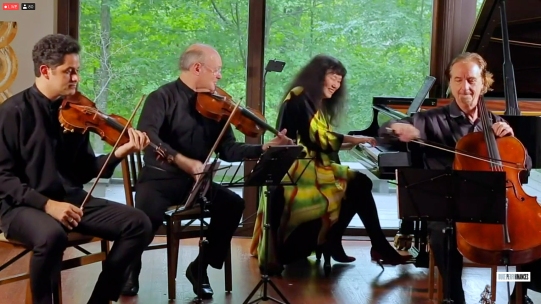 All of the musicians knew their way around this Brahms, confident and collegial in a setting that was marvelously intimate. Acoustics were so beautifully balanced that no engineering seemed to be involved, the music forward and effortlessly in our faces in a way that chamber music in a concert hall rarely is. Seemingly positioned so close to the performers, we could easily see their camaraderie as they collectively savored the twists and turns – and the peaks and valleys – of the opening Allegro, described by Finckel as “almost epic.” The group was genial and jolly in this performance than Emil Gilels’ mighty DGG recording with the Amadeus Quartet but no less convincing. The ensuing Intermezzo had a nice brisk tempo for its Allegro ma non troppo marking, with plenty of moody, brooding heft, culminating with a charming little coda where Han shined – somewhat belying Finckel’s description of the movement as “perhaps the most wistful scherzo-style movement ever composed,” but never disappointing.

More twists and turns greeted us in the Andante con moto with sweet lyricism early on, Han continuing to assert herself, followed by a majestic rhapsodic episode that broke into a deliciously pompous military march. The upper strings combined to steer us into lullaby land, and Sussman took the lead in a climactic ascent before the other players imposed a soft touch-down. It was in the closing Rondo alla Zingarese, described by Finckel as “one of the wildest folkdances in chamber music,” that the congeniality between the players paid off most handsomely.

From the outset, a thrilling gallop, there was no question that this foursome was taking the Presto marking seriously, increasing the excitement with sudden decisive shifts in dynamics, triggered by Sussmann’s assaults on the treble. Han took over control, calming things down, while the strings plucked pizzicatos in anticipation of the restart. The upper strings launched a new theme before Finckel and Neubauer sweetly launched another. Ideas continued to bounce unpredictably between the strings and the piano with hairpin changes in mood and tempo until Han triggered the final frenzy. There was enough speed and fire to convince you that the musicians were racing each other to the finish – but more than enough virtuosity and togetherness to reassure us that they were all fully synchronized and having tremendous fun. It wasn’t relief flowing through the room and through the screen when the music was done. It was pure Gypsy joy.