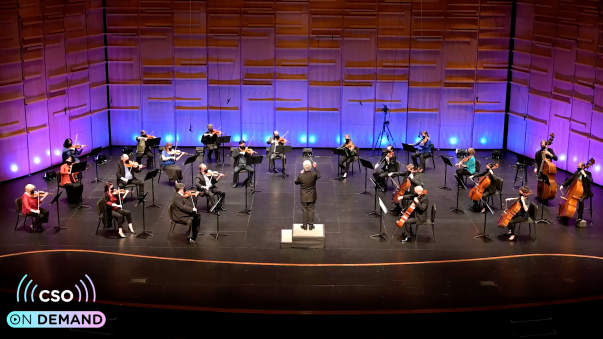 Over the past seven months of an unabated pandemic, I’ve become more and more immersed in reporting on and then reviewing performing arts companies and their responses to COVID-19 as it continues to swallow up the norms of our cultural life. Lately, I’ve become fascinated by what artists think we wish to see and what they wish to say. The balance seems to have tilted toward diverting and amusing us while easing the burden on our fragile attention spans. All of us wish to escape this moment, I’m sure, but ceding the drama in our lives to COVID news bulletins and political campaign rhetoric has seemed like a wan, impoverished response.

Sadly, the toolkits of artists who wish to address the moment – not to mention their monetary resources – have been drained by the necessities of social distancing and shrunken live audience limits. Larger organizations like Charlotte Symphony have had to pivot multiple times as the course of events spun out of control. Indoor concerts had to be cancelled late in the spring, and then outdoor summer events, both previously planned and hastily improvised, also fell by the wayside.

Hence a pivot to virtuality with a new CSO On Demand livestreaming series. It was doubly satisfying to see Christopher Warren-Green and a sizable contingent of his musicians onstage again at the Knight Theater, even if I was watching on a smart TV, for they hadn’t returned merely to serve up some musical pabulum. Edvard Grieg’s From Holberg’s Time and Tchaikovsky’s Serenade for Strings both have extended contemplative and elegiac episodes, echoing and commiserating with how we often feel in these mournful times instead of prodding us into forgetting. 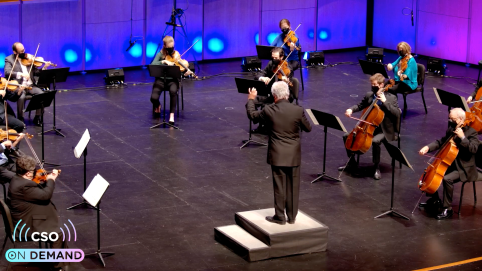 Even before they played, you couldn’t think Symphony was back to normal if you were watching. Winds, brass, and percussion were missing in action, so the stage wasn’t teeming with musicians and instruments. Nearly 40 percent of CSO’s string players were absent from this skeleton crew, spread out and socially-distanced on the Knight stage. Yes, I had expected Warren-Green and his orchestra to be masked, but the sight of them still took me aback, and I didn’t anticipate how different the ensemble would look when no two players shared the same music stand.

Whether it was hygiene, democratic deliberations, or aesthetics, the normal formalities of concert dress codes were relaxed, further emphasizing – or memorializing – that we were not back to normal. All were masked. Women were liberated to wear colored blouses or sweaters. Men wore jackets, but white shirts were not mandatory, and none wore neckties. Even with the purple-and-blue background lighting, the overall look didn’t suggest a triumphant celebration. All of these alterations seemed to color the music, making the opening Praeludium of the Holberg Suite sound braver and less festive. Similarly, I found the ensuing Sarabande more affecting, solemn, and poignant than I will if I revisit this concert at Symphony’s website in 2022.

The scent of springtime was unmistakable from the start of the middle movement Gavotte with hints of jollity in its brisk Allegretto. Nothing short of piercing heartbreak came across in the longest movement of the suite, the Air marked Andante religioso, all the more keenly felt when the music faded to a whisper before the last swell of feeling. Thankfully, concertmaster Calin Lupanu brought us back from this precipice with some truly zestful fiddling in the folksy Rigaudon finale, all of the other strings sustaining the merry Allegro con brio tempo behind him with pizzicatos, until his solo reached its jazzy release.

I don’t have any record of hearing Charlotte Symphony playing the Holberg before, but I own two recordings of the suite, one of which I reviewed in 2009, with Yuri Bashmet leading the Moscow Soloists. One of the things I particularly enjoyed on that CD was how the sound of the 17-member ensemble shuttled between the textured graininess of chamber music and the homogenized sheen of orchestral performance. That same delicious variety was audible in the Knight Theater webcast, particularly when I listened via Bluetooth on my Boston Acoustic loudspeakers via my Yamaha Receiver. Some of that texture Symphony’s 22 players was blurred when I listened through the same audio system via Chromecast, which also produced less delightful definition in the pizzicatos.

That same enhancement via Bluetooth was evident when I replayed the Tchaikovsky Serenade, which also appears on the previously mentioned Bashmet recording. So does Mozart’s famous Serenade No. 13, “Eine kleine Nachtmusik” – and with good reason. Tchaikovsky’s piece was written as an homage to Mozart’s Serenades, quickly finished while he was at work on the 1812 Overture and esteemed by the composer as having more heart and artistic merit than his flashier warhorse. Warren-Green didn’t seem to be aiming for Mozart as his trim orchestra launched into the initial Pezzo in forma di sonatina, which moves from an Andante non troppo tempo to Allegro moderato and back again. The massive sound Warren-Green elicited from his ensemble at the slower tempo evoked Bach more vividly than Mozart, and at the quicker Allegro juncture, the music was like the involuted canons Bach or Beethoven might whip up – or a dizzying 3/4 dance that might adorn one of Tchaikovsky’s own ballets.

With more of a ballroom ambiance as Warren-Green slowed and accelerated his tempos, the dancing flavor carried over to the Valse, where the cellos heightened the sense of intimacy with their warmth and tenderness. Beginning with a weepy whisper, the penultimate Élégie was the most tragic music of the evening, filled to bursting with bittersweet nostalgia. With pizzicatos handed off from section to section – four violas, four cellos, and two double basses to Warren-Green’s right, and 12 violins to his left – optimum audio reproduction paid especially huge dividends here. The orchestra has notably mastered playing softly under Warren-Green’s tenure, and the ending of the Larghetto was absolutely sublime.

The Tema russo conclusion began at a hushed Andante, hardly distinguishable from the Élégie that had preceded. With the onset of the Allegro con spirito section, we felt the joy and exuberance we had been craving during the middle movement of this Serenade – and realized how much we craved them. Before an even more rousing reprise of this celebration, the cellos ignited a romantic theme – and turbulent episode that built to a climax. A stately melody seemingly materialized out of nowhere, encapsulating all bravery, anguish, and grief that had weighed upon us through the evening before a final celebratory romp. Grimly, we were reminded how much more genuine joy feels after we’ve endured suffering and catharsis. Welcome back, Symphony, I’ve missed such authenticity.