Yes, playwright Tony Wright has flipped his villain’s gender for his new Halloween confection, Countess Dracula, but the ripest of the fiend’s victims – Mina and Lucy – remain substantially as they were when Bram Stoker published his original novel in 1897. In fact, all of Wright’s players are now women, including the vampire queen’s most implacable enemies, Jane (neé John) Harker and the occultist Professor Van Helsing.

While a mutual attraction that dare not speak its name seems to be simmering between Mina and Jane, no such restraints apply to the Countess, exclusively ravenous for female flesh and blood. Even her obedient slave, Renfield, is a woman – a madwoman with more powers than my credulity could take as this Actor’s Gym melodrama unfolded at Spirit Square. 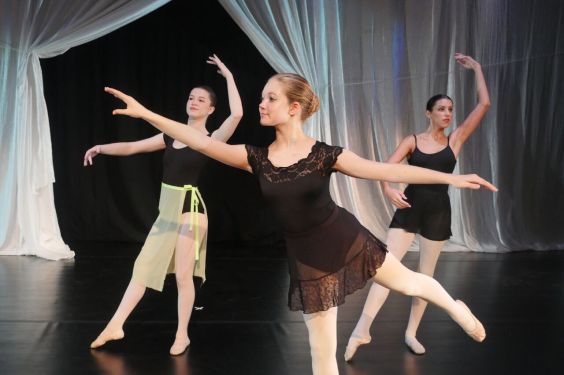 For some occult reason, perhaps a reluctance to hire a set designer, Wright confines all of his early action to a dance studio, where Mina and Jane are ballet students taught by a newly-minted Carlotta. (Lucy is already undead, gnawing on innocent children out and around London – and out of our sight – when the sun goes down.) It’s rather elegant, then, to see a Dracula knockoff begin with three ballerinas decorously choreographed by Melissa McDaniel dancing to music played on a phonograph, even if Wright’s budget doesn’t allow for an Edison replica that Carlotta could crank up.

This studio set-up works well enough for Dracula’s customary parlor visits and even excuses Mina’s lack of furniture. But we’re deprived of the Countess’s nocturnal invasions of Mina’s bedroom, where she overcomes such puny obstacles as garlic, wolfbane, and perhaps a locked window appreciably above ground. Forced to become a boarder offstage, Mina is a bit tainted by the thrift of the playwright’s concept.

Beyond that, Wright is further strained to engineer Renfield’s scenes at the same studio. Conceived by Stoker as Lucy’s suitor as well as a mental health specialist, Dr. Seward now operates the asylum that adjoins the ballet school – a business model that Seward herself recognizes is absurd. To take her share of the action at the studio, Renfield must repeatedly escape from her nearby cell, employing transformative and wall-clinging powers on loan from her mistress. Despite all the fuming and fretting of her keeper, Wilma, Renfield is always back in lockup before her next appearance.

You would think that Renfield might take advantage of her escapes to lose herself in a nearby meadow or wood, where she could hunt down all the flies and spiders she so desperately craves. What keeps her around, besides Dracula’s awesome power, is sheer contrivance.

Why Wright hamstrings himself with this fixed-set concept is beyond me, especially since the playwright-director is also a very capable lighting designer who could easily transport us to Renfield’s cell and Mina’s bedroom with additional lighting placements and cues. Deep into Act 2, when Dracula’s coffins come into play – the vampire’s homes away from his true Transylvania home – Wright will be forced to change scenes. He should surrender sooner.

Taking on these challenges instead of circumventing them would probably make COUNTESS DRACULA more fun to watch. With Harker and Van Helsing mostly in men’s clothing – and the Countess enrolling for ballet lessons! – fun and frivolity are definitely on our dance card. Tarantella, Smee!

Costume designer Davita Galloway has a merry old time dressing up Corliss Hayes as Van Helsing and Katy Schultz as Harker in dinner party attire – contrasting sharply with the drab togs she devises for Teresa Abernethy as Renfield. The inmate’s insane wildness gets accentuated by impossibly long sleeves designed to convert her top to a straightjacket. Flapping away like a cheap balloon-person outside a carwash, Abernethy pretty much steals the show every time she makes one of her weird, wild-eyed entrances, either from stage right or out of the orchestra. 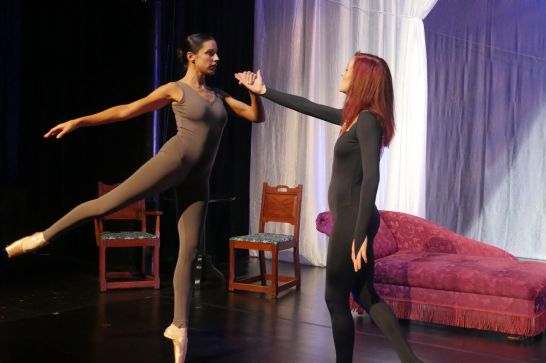 Only Elisha Bryant as the Countess truly compares with Abernethy’s dominance. She has the lean, slightly skeletal look that the best male Draculas have plus wild red Joker hair almost as flaming as Abernethy’s. She doesn’t stint on the Eastern European accent and, underscoring her catlike menace, we get to see Bryant in a body suit when she prowls her ballet lesson. Hayes at her best matches Bryant’s power and command as Van Helsing, but much of the time last Saturday night, she was reminding herself why she has so ably confined her stage appearances to eccentric cameos over the past decade, stumbling over many of her lines. We can only hope for more consistent performances this week.

Exiled to a dance studio as Dr. Seward, Lillie Oden staunchly sustains the illusion she belongs there all evening long, boiling over spontaneously each time Renfield makes one of her predictable escapes. Of the three ballerinas, only Candice Houser as Carlotta seems to have been chosen primarily for her dancing skills. Olivia DeAmicis as Mina and Katy Schultz as Harker make a wonderful couple, though you might be taken by surprise when you see how Wright treats them.

Schultz is notably starchy, self-effacing, and deferential as Jane, though she wears the pants and gently pushes for a more intimate relationship. As Mina, DeAmicis is as pure, chaste and unattainable as you would expect a storybook ballerina to be. Yet when she falls under Dracula’s spell, Mina emerges from her bedroom with an aggressiveness that clearly shocks Harker. It’s DeAmicis who now exudes catlike grace and menace in predatory pursuit of her would-be lover, and we’re not speaking of a kittycat, either. There are rough edges to Wright’s new Countess Dracula, but on occasion, his creation sprouts some deliciously sharp fangs.