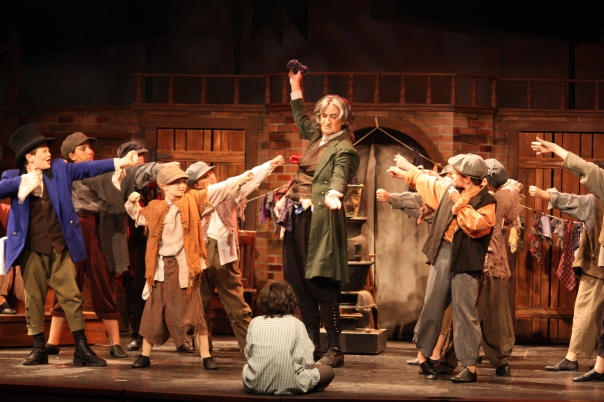 Ron Law will be retiring when his 15th season as executive director at Theatre Charlotte comes to an end next spring, but he sure isn’t retiring – or even receding into the background – right now. The spotlight will shine brightest on Law in December when he stars for the first time ever as Ebenezer Scrooge in the annual revival of A Christmas Carol at the Queens Road barn. Meanwhile he’s had other things besides bookkeeping on his mind for the past month or so, since the 92nd season at Theatre Charlotte is kicking off with a different Dickens, Lionel Bart’s Oliver! and Law is the stage director.

Thanks to some impressively weathered scenic design by Josh Webb and a juicy mix of dignified and low-life costumes by Melody Branch, the current production looks vibrant and fetching before we even reach the title song, though purists will recoil at the sound of the prerecorded orchestra. Your first favorable impressions will be sustained by the fine set of adult principals that Law has gleaned from the rich Queen City talent trove that showed up for auditions. Yet the mean rigidity of Mr. Bumble, the terror of Bill Sikes, the acquisitive cunning of Fagin, and the conflicted kindness of Nancy would be largely wasted if they were directed at an Oliver who didn’t win us over. 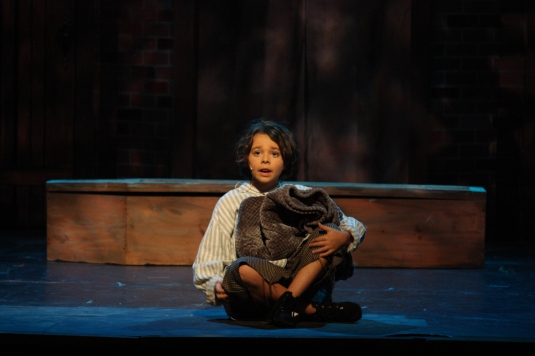 Atticus Ware passes his first key test as Oliver Twist simply by standing up after dinner has been served at the workhouse and having the cheek to say, “More, please!” We’ve actually seen an Oliver at Children’s Theatre long ago who looked the very antithesis of orphaned malnourishment, and it was hard to suppress a laugh. Easily two years younger than any Oliver to appear in a local production – except for Andrew Kenny in 2001 – Ware also passes muster when Bumble reassures the Sowerberrys, morticians he has sold Oliver to, that the lad will surely grow bigger.

There are prudential reasons past directors haven’t opted for an Oliver as young and small – and maybe considered cutting Bumble’s room-to-grow remark. Without a body mic, it’s hard for a middle-schooler to sing Oliver’s angelic “Where Is Love?” or his wonderstruck “Who Will Buy?” and make himself heard across an orchestra and an audience. Nicely miked-up, Ware holds up as beautifully as Andrew Griner did in Theatre Charlotte’s last Oliver! in 2007, and he adds palpable charm when he takes his turns in “I’ll Do Anything.”

Of course, the main reason why Oliver! is being offered in the metro Charlotte area for the sixth time this century is Bart’s amazing score. No fewer than a dozen of the songs have engraved themselves in my mind so that I can agreeably recall their main hooks without assistance. Familiarity can tempt directors and actors to deviate from established Oliver Twist expectations – or, in the practice of casting girls at the workhouse and in Fagin’s band of thieving urchins, widening our expectations.

Law has presented enough iterations of Christmas Carol to value and preserve the Dickensian spirit of Oliver while loosening casting requirements where the envelope has already been pushed. Johnny Hohenstein immediately stands out as a fierce and booming Mr. Bumble, while Geof Knight as Fagin and William Kirkwood as Sikes are among the best we’ve seen. Together they form an adult triumvirate who remind us that greed and corruption aren’t simply confined to the underworld.

Hohenstein is as titanic as a beleaguered husband as he is when he’s a tyrannical beadle, a definite asset. I find ample menace and intimidation in Sikes when Kirkwood delivers his growling “My Name,” and I like the sliminess that Knight brings to “You Got to Pick a Pocket or Two” – and the grim calculation of his “Reviewing the Situation.” You couldn’t get me to dispute that any of these three gave the best auditions for their respective roles.

It’s just that I want to see a craven factor, a fear of Sikes’ violent volatility that would give an extra dimension to Fagin’s craftiness. From there, the chemistry between the two rogues can be further textured by their one-time mentor-apprentice relationship. Knight just doesn’t have the appearance of a cerebral weasel, which would make these layers relatively easy and self-evident. Here it needs work.

When it comes to Sikes’ abusive relationship with Nancy, Bart gives Kristin Graf Sakamoto all that she needs to get to its heart. Even if Nancy isn’t liberated, she’s spirited, best seen in Sakamoto’s interactions with the youngsters and in her lusty, boozy rendition of her “Oom-Pah-Pah” polka. Nancy faces some grim choices with Oliver, yet Sakamoto makes it clear that fidelity to Sikes is infused with fear – propped up by fear, you could say – when she repeats her signature “As Long as He Needs Me.”

So the Sikes-Nancy-Oliver drama and suspense develops beautifully from the first moments that we see Sakamoto. There’s already a glint of welcoming light when the Artful Dodger accosts Oliver after he has escaped Bumble and the Sowerberry mortuary. Bailey Wray ignites a “Consider Yourself” welcome as Dodger, assisted by Lisa Blanton’s choreography, that seems to engulf the whole city of London. Wray himself radiates a city-sized energy all by himself. Dodger’s precocious top hat is a couple of sizes too large, a plausible wardrobe choice, but I suspect that Law has elected to keep it that way in order to keep Wray’s hyperactive hands partially occupied.

Later there’s lively bustle in Fagin’s lair when the master puts his kids through their pickpocketing drill, and a new flowering of Blanton choreography when Oliver awakens at the home of his benefactor, Mr. Brownlow. the greatness of Britain beams at us like a sunshiney day, for Ware isn’t the only vocalist in “Who Will Buy” as it swirls with increasing anthemic force. Consonant with this cornucopia of wholesomeness, Rick Taylor is upright and trusting, a quiet affirmation that goodness and kindheartedness can rise above the miasma that swallows up Bill and Nancy.

Aside from the cloudy Sikes-Fagin chemistry, Law only loses focus at the end when Fagin and Dodger make their final exits – seemingly without any emphasis or attitude. Maybe bringing them downstage would help, but it’s a moment that deserves more fiddling with and agonizing over. Last impressions are as important as our first. 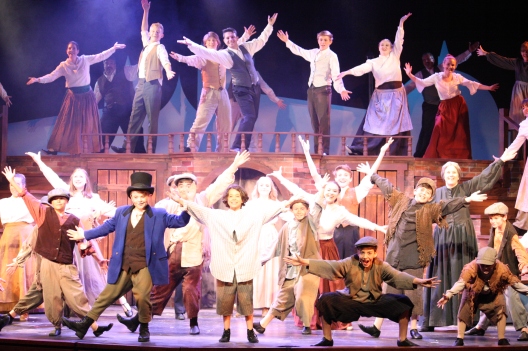 It’s still quite sensible to hurry over to Queens Road, where the corruption and goodness of humanity are as exquisitely balanced as night and day. At its core, Oliver’s journey is a progression from secluded, deprived oppression to the centers of opportunity and civilization. Performances are almost universally fresh and decisive among over 40 onstage participants, and it’s hard to overpraise the work of musical director Ryan Deal in keeping his singers fresh and precise through a long rehearsal process.

Of course, the excitement of opening night added a jolt of energy to the performance, especially for the 13 actors – plus a dog – who were making their Theatre Charlotte debuts. If you’ve never experienced Oliver! before, you will likely feel a similar jolt of discovery.