If your Simpsons erudition doesn’t extend far beyond Bart, Homer, and “D-oh!” you likely haven’t the foggiest notion about who the evil owner of the Springfield Nuclear Power Plant might be. Good reason for boning up on the 30-year-old animated TV series before you go and see Shakespeare Carolina’s production of Mr. Burns, Anne Washburn’s strangely imagined “Post-Electric Play,” at Spirit Square.

The Simpsons is very much at the heart of Washburn’s myopic dystopia, beginning not too long from now, somewhere south of devastated Boston – at a safe distance from obliterated Pennsylvania. Not an ardent lobbyist on behalf of nuclear power, Washburn doesn’t trigger her nuclear winter with weapons unleashed after treaty breaches, miscalculated escalations, or some jerk’s pudgy finger on the nuclear hot button.

Instead, we seem to have been decimated by a chain reaction of nuclear reactors.

Certainly, the evil Mr. Burns has triumphed over humanity in Washburn’s scenario, but it’s unclear whether she views that as her ultimate horror. For as a few survivors sit around a campfire, we might gather that The Simpsons has outlived all other recognizable trappings of civilization. Matt, Jenny, Maria, and Sam aren’t preoccupied with reaching out to other clusters of survivors or isolated wanderers – or in re-establishing the nation’s electrical grid. Rather they’re engaged, sometimes excitedly, in piecing together an old episode of The Simpsons that they have all watched years ago.

Presumably a rerun, for the “Cape Feare” episode, the core of the reconstruction, first aired in 1993, twenty years before the off-Broadway premiere of Mr. Burns.

A newcomer named Gibson wanders into the campsite with the bad tidings from Boston. He is also familiar with this seminal episode of The Simpsons and contributes to the group reclamation. Aside from a ritual sharing of possible survivor info, that’s pretty much all of the Act 1 action. 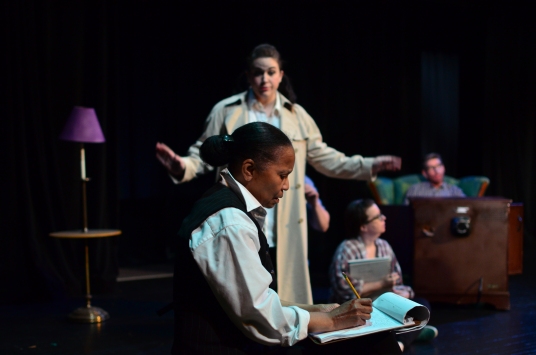 Not at all interested in adhering to established theatre traditions, Washburn gives us two intermissions instead of the usual one. And if you think the opening act was a bit impersonal, wait till you see the acts that follow. It’s seven years later and Colleen, recumbent and silent throughout Act 1, has become a post-electric TV director, and the company has grown to seven with the addition of Quincy.

We see the group rehearsing an odd amalgam of quick TV sitcom blackouts and commercial breaks, where “Cape Feare” has evolved and commercials are no less revered for their nostalgic content. Apparently, touring with such rudimentary fare has become a cutthroat industry. Lines, slogans, and episodes are licensed, and competition for rights to them is fierce – and perhaps more important than the quality factor.

Zoom ahead 75 years and, under Amanda Liles’ ritualistic direction, you’ll be able to visualize “Cape Feare” as either a solemn religious rite or as an eerie melodramatic opera, for most of the music written by Michael Friedman to Washburn’s lyrics resides here. Liles and the ShakesCar cast also leave the ending ambiguous. We’re either watching the near-revival of the electrical grid or a re-enactment of the original flameout.

Mr. B finally emerges emphatically during this savage spectacle, not as the evil and greedy capitalist of yore but as a demonic destroyer. Homer, Bart, and Marge are now as foundational as Abraham, Isaac, and Jacob – though their sacrificial fates bring in a New Testament flavor. Stray wisps of Washburn’s referential comedy still remain, though, as when the Simpsons make merry with new lyrics to The Flintstones’ theme song.

My suspicion is that enjoyment of Mr. Burns will be proportionate to how readily you can see yourself sharing in the opening bursts of enthusiasm that the nuclear holocaust survivors have in reconstructing “Cape Feare” on The Simpsons. Lacking more than rudimentary Simpsons erudition – Homer’s voice will send my hand flailing toward my remote a bit more quickly than Bart’s – I’ll have to admit that I struggled. My memories of Homer’s zenith had faded into forgetfulness long before 2013.

An apocalyptic landscape such as Washburn’s is obviously frill-averse, so if Jess Clapper’s costume designs look somewhat makeshift, no harm done. The cylindrical blue headdress that Jen Jamsky-Pollack wears as Marge works fine, recognizable in an instant for The Simpson faithful, while Rasheeda Moore’s get-up as Bart looks comparatively thrown together. Viking shoulder plates? Why not.

Nor does an outdoor campsite in the middle of the night – or the scenes to follow – require that Liles seek out a set designer, though the final flashes of zonked light presumably required some technical derring-do from James Cartee. The design and tech needs of Mr. Burns really do jibe well with ShakesCar and their fundamental Elizabethan fare.

Except that, in Mr. Burns, we never become more than superficially acquainted with anyone onstage. In Act 2, we can at least conclude that we’re watching a director with a company of actors, all of whom discuss the production they’re rehearsing and the biz. In the outer acts, Shakespearean ripeness is pretty much deep-sixed. The characters they’re portraying or debating are more important than who Matt, Jenny, Gibson, Colleen and the rest really are. By the time we’re 75+ years hence, when all these folks are sporting various configurations of face paint, they can’t really be the same people we were introduced to.

It’s not just a surrender to a debased pop culture that Washburn seems to be sketching – it’s a surrender of identity. Maybe that’s the point that the playwright wants to make, irrespective of nuclear threats, and maybe she was worried that we wouldn’t notice or be alarmed. 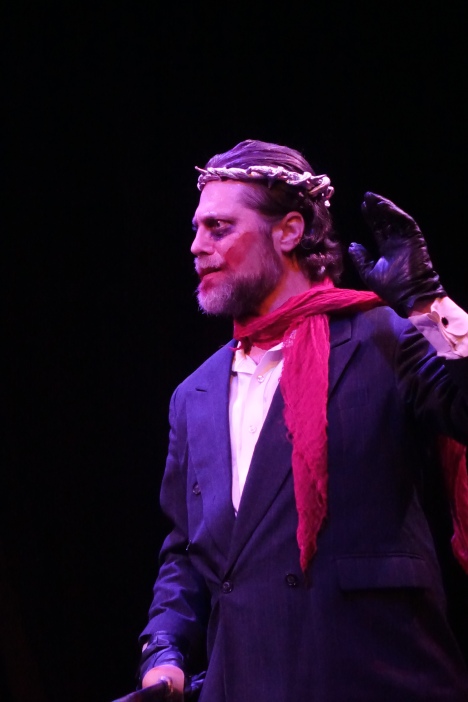 Most people who enter Duke Energy Theater for an evening with Mr. Burns – or the actor who plays the actor who eventually portrays Mr. Burns – will likely wish that Washburn were a little more worried about our perceptions of her script and a little more proactive. While I may need to evolve into a post-critic to properly evaluate Washburn’s post-characters, I’ll start with David Jamsky-Pollack as Matt, the geekiest Simpson preservationist in Act 1.

Although he lays relatively low in the middle act, Matt morphs into Mr. Burns, and more than anyone else, Jamsky-Pollack incorporates the pop-eyed essence of The Simpsons into his portrayal. That creates a credible bridge with Matt, whom Jamsky-Pollack makes the most hyper and paranoid of the people around the campfire. As Colleen, Corlis Hayes is another near-person we pay attention to, primarily in Act 2 while she is the company director and Matt is in eclipse. Hayes is moderately bossy, a bit yielding when her authority is challenged – everything her role demands.

Dervin Gilbert is arguably the nearest to a three-dimensional person as Gibson in the first two acts. With multiple guns pointed at him as he enters the campsite, we can empathize with his trepidations and attempts to ingratiate himself, and seven years later, Gibson is Colleen’s leading man, a temperamental artiste in an arts wasteland. Matt Kenyon as Sam/Homer, Melody McClellan as Maria/Lisa, and Jen Jamsky-Pollack as Jenny/Marge are most memorable during the sacred Simpsons rites, successfully achieving and slightly transcending cartoon reality. 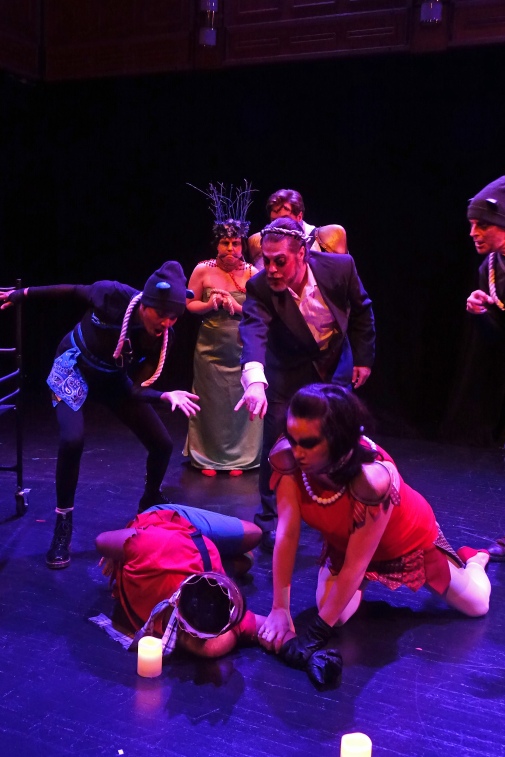 Among the latter-day Simpsons, I was most taken with Moore, who doesn’t arrive until after the first intermission as Quincy, a singer with as much artistic pretension as Gibson. It does make sense that Quincy would get to chew nearly as much scenery as Matt when the Simpsons ritual becomes a life-or-death struggle between good and evil. Cartoon or not, Moore’s writhing, struggling, despairing, and rallying are key reasons why we see the horror in Mr. Burns, whatever it may mean.