Head over to Greensboro for the Eastern Music Festival and you’ll find multiple orchestras and multiple concert series sprinkled across the annual five-week celebration. Peep in on the last nights of EMF and you can expect multiple symphonic finales, the Young Artists Orchestras offering their valedictories followed by the professionals of the Festival Orchestra on closing night. Of course, among the primary reasons for making the journey, both for students who populate the youth orchestras and for audiences who come to see them, are the bold programming choices by EMF music director Gerard Schwarz, who marked his 15th year with the festival in 2019.

Led by José-Luis Novo and Grant Cooper, the Young Artists performed Richard Strauss’s Tod und Verklärung (Death and Transfiguration) and Maurice Ravel’s Daphnis and Chloé Suites, not the longest concert that I’ve heard on the bosky Guilford College campus at Dana Auditorium. Schwarz took over the Dana stage the following night last Saturday, conducting a program that was epic in length, culminating in a memorable performance of Strauss’s Alpine Symphony. Before reaching that summit, Schwarz premiered his own orchestration of Anton Webern’s Langsamer Satz (or Adagio) and guest artist Horacio Gutiérrez played the Brahms Piano Concerto No. 2.

Cue up a recording of either of the Strauss tone poems presented at the EMF finales and you’ll quickly hear why it’s essential to hear them in live performance. Even with headphones, you hardly hear anything, let alone the rich low textures that Strauss swaddles us in so softly before he builds. Nor is either one of these pieces heard even infrequently in the concert hall, so the jolt of discovery doesn’t stop at the lip of the stage when a performance is offered, especially when played by an orchestra with musicians aged 13-23. Cooper and his ensemble admirably brought out all the instrumental voices and textures in the introductory section of Death and Transfiguration, where Strauss depicts his protagonist on the verge of death. The tingle of revelation onstage and in the hall was nearly palpable.

Almost two minutes passed before a faint oboe and a glimmering flute emerged over the strings with a pair of harps, just before the clarinet asserted itself. In bolder relief, the principal oboe and flute shone before we heard the concertmaster’s eloquence. At the first tumultuous life-death struggle – where I hurriedly turn the volume knob back from 2 o’clock to 10:30 on the acclaimed Karajan recording – the violins vied stirringly with the mean trombones. Through the quiescent respite granted to the dying man and into the fourth and final section where the heavens open up to him, sounds of glowing nostalgia and immanent death gave way to exquisite sunlit violins and waves of serene luminescence, the stately linearity of the winds and brass contrasting effectively with the gilded haze of the strings.

Intermission saw a mass exodus of musicians, instruments, and instrument cases as Cooper’s orchestra – likely 80 or more strong – gave way to Novo’s equally large ensemble. Some of the same thrill of discovery for the Strauss carried over to the Suite No. 1 from Daphnis and Chloé, so rarely performed live and far less captured on recordings than Suite No. 2. Where that ballet originally sets a nocturnal pastoral scene with Nymphs dancing and Daphnis competing against a rival for Chloé’s kiss, the music was as delicate and impressionistic as we expect from this composer, so the “Danse Guerrière” – the onset of pirates – was likely doubly startling for listeners who haven’t delved deeply into Ravel. Sometimes, it’s more accurate to link Ravel with Saint-Saëns than with Debussy. Suite No. 2 delivered the same kind of duality, its “Lever du jour” dappled with birdlike flutes and the concluding “Danse Générale,” heralded by harps and swirling flutes, unleashing a powerful Bacchante fury, with Novo’s orchestra undaunted by the invigorating 5/4 metre.

With the world premiere of Adagio, Schwarz was revisiting a Webern piece that he had already orchestrated in the early 1980s, some 20 years after its rediscovery. Then he had retained its original title, keeping and enlarging on the parts written for string quartet while adding a bass part. Modestly modified though it was, Schwarz’s version, released on his 1994 recording with the Seattle Symphony, was at least three minutes longer than any string quartet version that I’ve tracked down, an expansion of more than 30 percent. In a sense, that was chiefly what Schwarz was aiming for, according to the helpful notes in EMF’s program book, for the maestro felt that a full orchestral version was necessary to bring out its Mahler-esque poignancy – and to play the piece as slowly as needed for maximum impact.

The new orchestration builds handsomely and colorfully upon Schwarz’s previous enhancements, adding significant parts for wind and percussion along with notable highlights for flute, clarinet, piccolos, and timpani. No less audaciously, Schwarz modified his string writing, giving the principal violist, cellist and the concertmaster moments to shine. The result was noticeably livelier and more dramatic with a far wider dynamic range, delivering a larger dose of Mahler majesty. Even the cymbals’ clash during the final swell meshed seamlessly with the overall concept.

My first exposure to Horacio Gutiérrez was 20 years ago, when he performed the Prokofiev No. 2 with the Charlotte Symphony under Peter McCoppin, emphatically demonstrating that his artistry and power were tough to follow. At Dana with the EMF Festival Orchestra, Gutiérrez somewhat upstaged Schwarz even before he appeared. Or at least his piano did, awaiting his arrival. Inside the auditorium’s acoustic shell, the musicians filled the stage beyond the proscenium, so bringing a piano in from the wings would have required an intermission rather than a discreet break.

Gutiérrez’ musical entrance came quickly enough in the opening Allegro non troppo, charming us in the little exchanges with the French horn before spasms of febrile keyboard eruptions summoned the full orchestra. While the acoustic shell at Dana kept the sound moving out toward us instead of partially evaporating into the wings and backstage, the effect on Brahms’s more linear sound wasn’t as flattering as it was for Strauss’s tone poem or Ravel’s impressionistic blends. Bass and treble weren’t as separated coming from the piano as I have experienced in other halls, but the lack of definition had a more telling effect on the orchestral parts. It was gratifying to hear more crispness from Gutiérrez and the ensemble as the movement climaxed.

The ensuing Allegro appassionato was more receptive to the natural pedal effect of the Dana acoustics on the piano, and Gutiérrez’ virility contrasted effectively with the Festival Orchestra’s delicacy. Against a finely becalmed backdrop, the soloist became livelier and more rhythmic, yet together orchestra and soloist crested in grandeur as the movement ended. The slow Andante movement was even more ideally suited to the hall as a skein of cellos, settling over a mist of violins, added introductory magic. Before we heard from the pianist here, violins and winds deliciously ratcheted our anticipation upwards. Gutiérrez did not disappoint, surpassing himself with his lyrical outpourings, two dreamy perorations sandwiched around a reminder of his thunder. In the concluding Allegretto grazioso, he played with a geniality that suggested all difficulties had already been overcome. Rhythmic aspects of Gutiérrez’ keyboard work were more merrily emphasized than before, with a treble that truly gleamed. 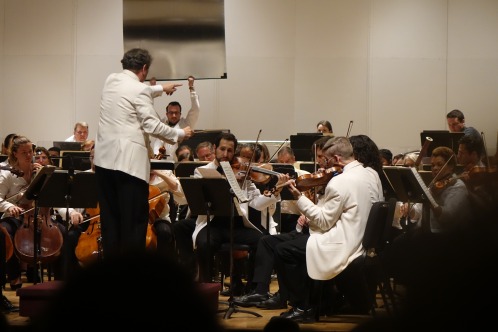 Never having seen a live performance of Eine Alpensinfonie before, I’ll have to admit that a glance at the program booklet filled me with dread. There are no fewer than 22 parts to this mountain journey with no pauses, and apart from unmistakable signposts, how could I be sure where we were? Maybe that disorientation explains why this epic symphony is so rarely given a live hearing! Well, I needn’t have worried. Supertitles to the rescue! After the nearly self-explanatory “Night” to “Sunrise” sequence, with a starburst nearly as glorious as the famed Also Sprach Zarathustra opening, navigation was effortless across forest, stream, waterfall, and meadow as titles projected over the proscenium marked the beginning of each new stage of our Alpine tour.

Offstage horns were now contextualized as we began “The Ascent,” and we could be surer that the lonely oboe or English horn signaled our arrival at “The Alpine Pasture,” speckled soon afterwards with birdlike twitterings of a flute. Reaching the “Summit,” “Sunset,” and the final onset of “Night” were predictable glories lying ahead, but a large aluminum sheet hanging down over the percussion section upstage was a sure forecast of stormy weather. Looking at the adult musicians playing during the “Thunder and Storm” section of Alpine Symphony, I felt like they were having as much fun as the students had the night before as they revealed the mysteries of Death and Transfiguration.

I found over 80 faculty artist biographies for members of the Festival Orchestra – most of them printed in the rear of the festival’s 156-page program book and most of them without photos. So it was pretty much by accident that, thumbing through the book and surveying previous concerts, I was able to match principal percussionist John Shaw with his picture. Shaw had been the featured soloist on the previous Friday, a week before the Youth Orchestra Finale, playing Joseph Schwantner’s Concerto for Percussion and Orchestra with Cooper and his youngsters. Now in the heat of “Thunder and Storm,” he may have been exerting himself even more strenuously, cranking a wind machine that vied in volume with the clamor of that large thundering aluminum sheet. Shaw hadn’t bothered to take off his formal white jacket to execute his mighty cranking labors, yet there was a big wide smile all across his face. He was the kid this time.