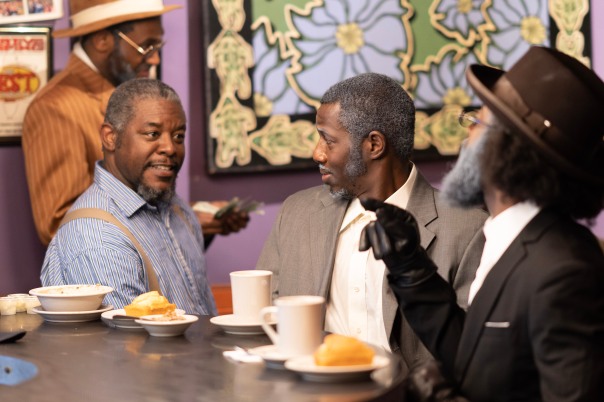 Rory Sheriff, the founder and producer at Brand New Sheriff Productions – and the author of two works staged at Spirit Square, Be a Lion and Boys to Baghdad – has a special affinity with the work of August Wilson. After presenting Wilson’s Jitney at Duke Energy Theater in 2017, BNS is back this Thursday with Two Trains Running, another drama from Wilson’s acclaimed 10-play Pittsburgh Cycle.

The special appeal of America’s pre-eminent black playwright for Sheriff is twofold – as a writer and as a Pennsylvanian.

“As a playwright myself,” Sheriff explains, “I am fascinated with August Wilson’s style of writing, more so the characters he writes about. Growing up in Reading PA, I can relate to every last character, situation and location he speaks about in Two Trains Running. The beautiful thing is I can now see and understand these people from an adult point of view. They are my dad, his friends, my uncles, my neighbors. I guess what I’m trying to say is I’m reliving my childhood through the works of Mr. Wilson.”

Each of the plays in Wilson’s Cycle is set in a different decade of the 20th century, and all of them are set Pittsburgh’s Hill District, except for one Chicago excursion representing the 1920s, Ma Rainey’s Black Bottom. The only play that predates Ma Rainey was the one Sheriff first plunged into, Jitney, which premiered in 1982 and represents the 1940s. By the time Two Trains, representing the 1960s, premiered in 1990, Wilson had already finished six of the plays in his Cycle.

So Sheriff has honed in on decades that his dad and uncles would recognize, but as he takes us back to the days of Malcolm X and the rise of the Black Panthers, Sheriff is promising that Two Trains won’t be his last stop.

“Yes,” he proclaims, “BNS Productions is committed to producing all ten of Mr. Wilson’s works. We will produce at least one of his works every season. Here’s an exclusive: We will be ending this season with Jitney, and next season we will be doing Radio Golf.”

This extraordinary announcement comes during an extraordinary launch of Black History Month, with three theatrical productions featuring black performers opening in the same week – making some unprecedented Charlotte history. While Theatre Charlotte is waiting until the first of the month on Friday to open Ain’t Misbehavin’, Actor’s Theatre is jumping the gun, officially opening Nina Simone: Four Women on Wednesday.

None of these productions is miniscule, testifying to the depth of black acting and musical talent across the Queen City. So the time is ripe for Brand New Sheriff to be making bolder, more confident and ambitious plans. 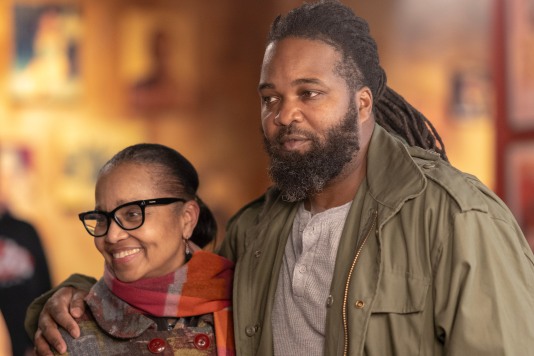 “All of the actors in Two Trains Running have been in at least one Wilson play,” says Corlis Hayes, who will direct. Hayes is no slouch herself. Combined with the four she has directed at CPCC, where she teaches in the drama program, Hayes has now directed six of the 10 Pittsburgh plays, including the two Pulitzer Prize winners, Fences and The Piano Lesson.

Like Jitney, the action in Two Trains Running takes place in a building slated for acquisition and demolition by City of Pittsburgh. The wrongheaded concept of urban renewal evidently had a cancerous grip on black community life for a long time. Here it’s a restaurant rather than a gypsy cab company facing its doom, and the restaurant owner, Memphis, is our protagonist. He’s holding out for a fair price on his property – against the lowball bids of both the city and the ghoulish, rapacious West, who owns West’s Funeral Parlor across the street. 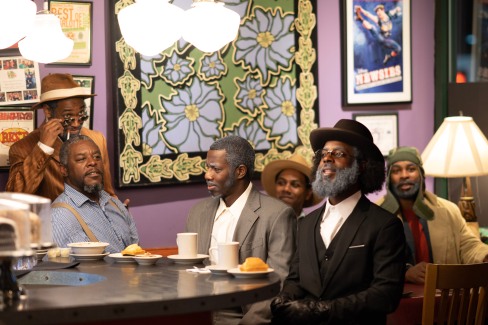 Memphis also has some unfinished business back in his hometown of Jackson, Mississippi, where he was driven off his land many years earlier and not paid a dime. He’s typical of the black men in Wilson’s plays, struggling against a system that white society has rigged against them. Echoing that reality – or responding to it – men in both Jitney and Two Trains Running play the numbers, hoping that luck will supply the boost that honest work doesn’t.

Recently discharged from prison, another recurring Wilson motif, Sterling is trying to interest Memphis and his male customers in attending an upcoming Black Power rally. Jonovan Adams, who has performed in all the Wilson plays that Hayes staged at CP, will portray the restless, volatile Sterling. Activism isn’t his only pursuit: he asks everybody he speaks with for a job or at least a lead, and he’s persistently trying to make headway with Risa, Memphis’s troubled waitress. 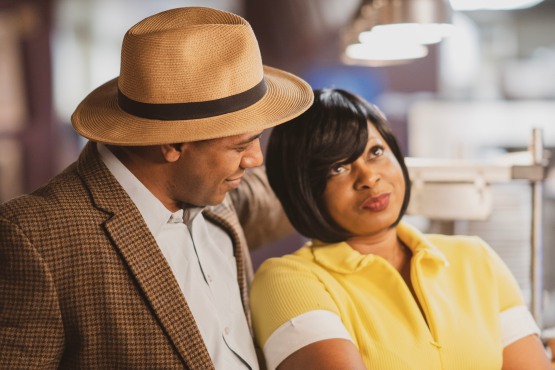 Estranged from his wife, Memphis seems to have a blind spot when it comes to women. Debating with Holloway, one of his older customers, about why Risa has mutilated herself, Memphis labels her dangerous while Holloway sees her as searching for someone who will love her true inner self.

“I feel both of these men hit on some truths about Risa,” says actress LeShea Nicole, whose previous venture into Wilson’s world was as Vera in the On Q Performing Arts production of Seven Guitars in 2015.

“Dangerous is definitely not a word I would use to describe Risa, because she never resorts to violence or threats, but I believe she feels ruined from some form or forms of abuse that she encountered in her past that has caused her to shut down socially/emotionally and even distort her appearance. Risa may feel ruined, but not beyond repair. She seeks guidance and solace from Prophet Samuel, which, in my eyes, equals hope.”

Working on her second Wilson drama, Nicole is switching companies and directors. The legendary Lou Bellamy, founder of Penumbra Theatre Company in St. Paul, Minnesota, worked directly with Wilson on multiple occasions. Bellamy not only directed Nicole for On Q, he also directed her as an understudy for the Blumenthal Performing Arts production of The Mountaintop that played at Booth Playhouse in 2014.

In their first-ever collaboration, Nicole says that Hayes measures up. 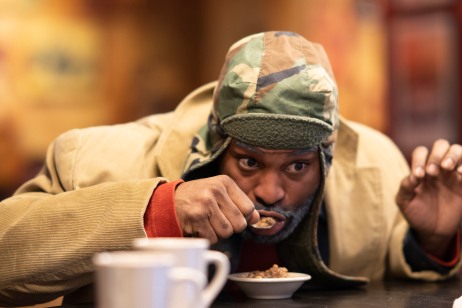 “I am extremely pleased and energized with her process of directing,” Nicole says. “She’s well versed and makes it her mission to stay true to Wilson’s vision. Dr. Hayes allows actors to explore, find depth in our characters and tap into our creative freedom without jeopardizing the integrity of the production. It is a tricky balancing act that she masters effortlessly. Hayes’ extensive acting career truly makes her an ‘actor’s director’ which is wonderful.”

Whether it’s Prophet Samuel, who lies in state at West’s funeral parlor, or it’s hitting the numbers; whether it’s promoting a Black Power rally or gleaning wisdom from the mysterious Aunt Ester, a 322-year-old soothsayer; the people of Two Trains Running are seekers. The emphasis on ritual especially sets this play apart from other plays in the Pittsburgh Cycle, according to Hayes, but there’s still a common thread.

“Always with Wilson,” Hayes observes, “reunion and reconciliation with the past heals the wounds of the present, bridges gaps between loved ones, and clears the path for a promising future.”