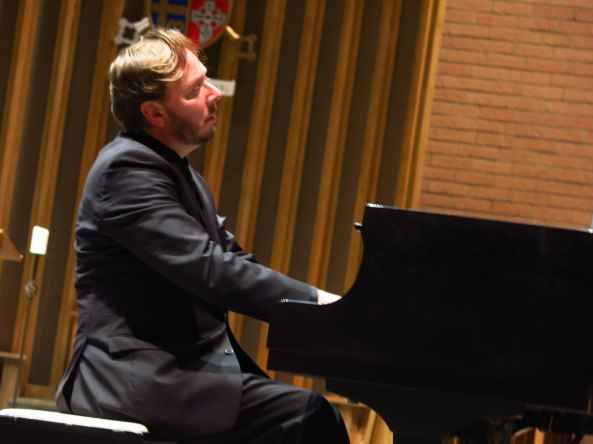 Driving out to Belmont Abbey College for an Arts at the Abbey concert featuring pianist Thomas Pandolfi, I seemed to have a previous memory of the name from my CD collection. Later that evening, I found Giovanni Antonio Pandolfi Mealli among my CDs, nestled between music of Paganini and Panufnik. The recording of his violin sonatas by Andrew Manze, which I heartily recommend, was released nearly 20 years ago when Manze could do no better than narrow the composer’s birthday to somewhere between 1620 and 1634 in Umbria. A search of Spotify unearthed three subsequent albums after Manze’s 1999 excavation – plus a new disc by the pianist that includes three of the pieces I had just heard at the Abbey Basilica. At Amazon, Thomas is better-represented than Giovanni, with a selection of CDs dating back to 2006. Scanning the extensive biography in the Arts at the Abbey program, I didn’t find a family connection between the American pianist and the Italian composer, but an artistic connection emerged while Thomas played: these are both musicians who deserve to be better known.

Pandolfi has technique to spare and the strength to punish a piano. His program showed a predisposition toward the tried-and-true, Manuel Ponce the only composer he needed to introduce. Leonard Bernstein, frequently performed during his centennial year, was the first of the familiar names to get a hearing with “Rhapsody of Themes from West Side Story,” Pandolfi’s arrangement of Lenny’s most famous score. Very much like Bernstein’s orchestral overture, but with a different mix of melodies, Pandolfi’s arrangement gave him a chance to show his prowess with splashy, spicy tunes as well as tender lyrical ballads. Playing loose with the sequence of the show, Pandolfi seized upon “Tonight” for his first subject and used the familiar theme from the “Prologue” and “Jet Song” to transition to the festive “I Feel Pretty,” which became a rather grand march before a minor-key meditation flowed into “One Hand, One Heart.” A second slow-fast-sequence intensified the rhapsodic mood of the piece with florid treatments of “Maria” and “Somewhere” bookended around a sprightly “America.” With Gershwin’s Rhapsody in Blue looming at the end of the program, this was a truly auspicious beginning.

A trio of fine Chopin showpieces followed, building gradually in intensity after the placid Nocturne No. 2 in E-Flat. Playing a little too quickly to plumb the full depths and beauties of this piece, with dynamics that didn’t make the most of its dramatic contrasts, Pandolfi was impeccable in his technique, teasing out the Nocturne’s waltz rhythm – and his trilling little codetta as we turned toward home was simply exquisite. After calling our attention to the “Always Chasing Rainbows” midsection of the Fantasy-Impromptu, Pandolfi produced his best playing so far, admirably navigating the turgid A-theme so that clarity was balanced with power. Transitions in and out of the midsection delivered sharp, dramatic contrasts.

The marvelous Opus 53 Polonaise, “The Heroic” in A-Flat, is a litmus test for piano technique and artistry. I remember arriving at the University of South Carolina as a teaching assistant in the early ‘70s and discovering the extensive LP collection at the local library that enabled me to compare how the masters attacked and interpreted this masterwork: Rubinstein, Horowitz, Entremont, Vasary, Brailowsky, and others. There are worse ways to absorb the nuances of musical interpretation and develop personal taste. It’s also pretty special to be able to hear this piece played live by someone with the attack force that can shake and roll a grand piano the way Pandolfi can. The opening sforzando snapped our heads back, and the first sounding of the heroic melody was as sharp, crisp, and uplifting as you could wish. All the intervening passages were also beautifully judged and mastered (the second quick-step interlude is a formidable beast), and the closing summation was truly rousing and thunderous. There was a satisfying rigor to the earthbound final chords, which can often sound awkwardly separated from the explosion that precedes. My only problem with the performance came when Pandolfi repeated the heroic refrain on its second and third hearings. While I appreciated his urge to vary what we had previously heard, I felt that he strayed too far, softening and muddying a couple of measures that had previously been crystal clear and bright. Nothing nearly as perverse as Lang Lang’s recent recording, mind you, but a bit outré.

After that thunder – and the enthusiastic applause that greeted it – Pandolfi reset and started a fresh trilogy in the same intensifying mold as the Chopin set. Debussy’s “Claire de Lune” came off with more lyricism and delicacy than the Nocturne, indicating that the pianist was calmer now – or maybe slightly wearied from his Polonaise exertions. The sound he could coax from the piano was as impressive as the feeling. Ponce’s Intermezzo #1 was the only letdown in the concert, rushed too much at the start and not sufficiently varied in dynamics afterwards to get a full sense of the piece’s architecture, though wisps of its “Windmills of Your Mind” flavor came through. 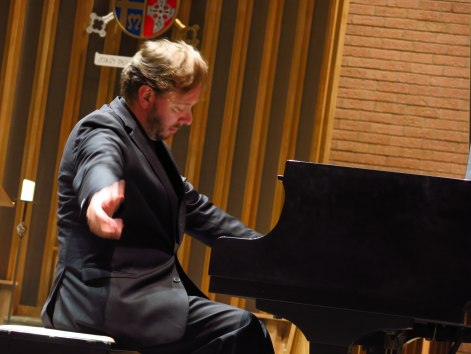 Not to worry, Pandolfi had a grand finale in his pocket and, he hinted, a special encore if we liked his Gershwin enough. The piano transcription of Rhapsody in Blue is daunting from the beginning, when the soloist is called upon to replicate the famous opening glissando that fits the clarinet so divinely. Pandolfi accepted the challenge with gusto, producing a sound from the keyboard that was respectably close to the reed instrument, and he attacked orchestral passages with a zeal that was exhilarating. All the dynamic contrasts that were wanting in the Ponce were here in superabundance, so that the succession of late-night, blues-tinged quietudes flowed meaningfully into the city lights outbursts. Of course, all the passages originally written for piano had a special glitter, but Pandolfi was also up to grand onset of the familiar rhapsody melody and the rocking celebration that follows. All of Pandolfi’s considerable showmanship came in handy as we reached this classic upswell, yet the final moments of this epic performance were a model of restraint, control, and dignity. Of course, the audience loved it.

So we were granted the privilege of an encore, a resourceful mashup by Pandolfi of Andrew Lloyd Webber’s Phantom of the Opera. On the new CD, Pandolfi’s “Phantom Phantasy” is actually the first track, but the 2018 release is titled After the Applause, so if I’m interpreting correctly, everything on its songlist qualifies as an encore. About half as long as the mammoth Rhapsody in Blue, the Lloyd Webber fantasia was noticeably longer than typical encores and quite a feast, more cleverly and artfully arranged than the Bernstein rhapsody – florid, romantic, rhapsodic, and melodramatic. A lot of fun, really, as Pandolfi unpredictably interwove the Phantom melodies, and a refreshing way to end a satisfying recital.