Meeting an anticipated demand, Charlotte Symphony is programming their 2018-19 season opener, Beethoven’s Fifth, for three concerts instead of the usual two – and meeting subscribers’ hopes, they’re playing it beautifully. Leading off their season with an all-Beethoven program, music director Christopher Warren-Green and his ensemble weren’t exactly blazing new trails.

Last fall, Symphony also led off all-Beethoven, playing his mighty Ninth, and followed that program with more Beethoven in two of the next three concerts. So if anything, Symphony is tapering off on their Beethoven offerings this year – but not ignoring their audience’s rabid enthusiasm for his music. What’s impressive is that the musicians have maintained their enthusiasm as well. 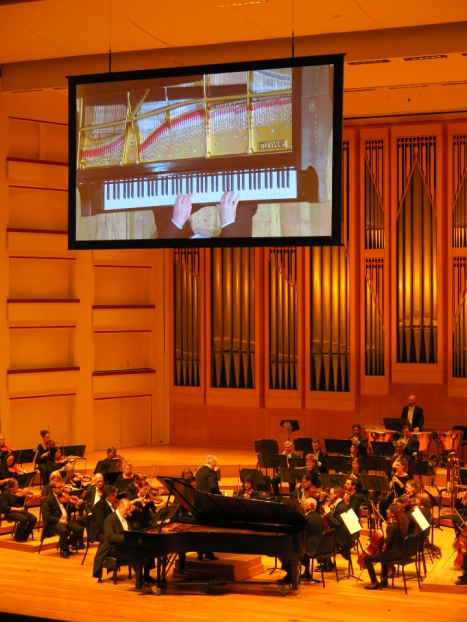 A surprisingly small contingent, less than 50 players by my count, came out and played the “Overture to The Ruins of Athens,” one of Beethoven’s less familiar orchestral works, before guest soloist Garrick Ohlsson came out to perform the Piano Concerto No. 4. I couldn’t detect much desolation in The Ruins after its slightly gloomy intro. The first oboe statement was like a dewy sunrise, triggering a burst of orchestral merriment that drew a festive rejoinder from the oboe and jollity from the two flutes fluttering over the bassoons.

Such a charming appetizer! Then a big video screen descended from the Belk Theater proscenium, and the Steinway was wheeled to centerstage.

Ohlsson’s last appearance with Symphony was back in the early ‘90s, long before an overhead shot of the keyboard could disclose the size of this man’s hands for all to see as he attacked the keyboard. Those prodigious digits didn’t quite stop moving long enough for a conclusive measurement, but it sure looked like his pinkies were as large as the black keys. With that view, what was perhaps most impressive about Ohlsson in the first two movements was his delicacy and grace.

The opening Allegro moderato shuttled between swift, powerful passages and soft lyrical episodes. Ohlsson played both admirably, effortlessly, trilling with both hands simultaneously and, in the dramatic cadenza, clearly articulating its counterpoint. Warren-Green asserted himself more noticeably in the middle Andante con moto movement, so that it became a dreamy dialogue.

Every note of the concerto sounded fresh and new – until we slid into the familiar final movement with hardly a pause. Everyone onstage lit into it with gusto, the swift finger work at the start of this Rondo presenting no difficulty at all for Ohlsson, who proved that he was holding his full power in reserve for this celebratory climax. Ebb and flow weren’t so much about tempo here as they were about dynamics. Ohlsson and Warren-Green meshed beautifully to sculpt the loud and soft moments in a most satisfying way.

As the program notes on the concerto pointed out, it was especially fitting that Symphony had paired Piano No. 4 with the Fifth Symphony, for they were both premiered on the same December evening in 1808 – at a concert in Vienna, where Beethoven played and conducted. That marathon event also unveiled the Sixth Symphony, the Choral Fantasy, four movements of the Mass in C, and the “Ah! Perfido” aria for soprano. Although Warren-Green didn’t mention this historic landmark, when Beethoven would play for the last time in public due to approaching deafness, you can bet he was aware of it.

Six years ago, when Warren-Green conducted the concerto for the first time at Belk Theater, he paired it with Symphony No. 4, also in an all-Beethoven concert that launched the season. On that occasion, Warren-Green did mention that the very first time Beethoven performed the piece in a private concert at the palace of his patron Prince Joseph Lobkowitz in March 1807, he also conducted his Fourth Symphony.

This time around, Maestro called our attention to the fateful opening of Symphony No. 5, “the most famous four notes in the history of music,” saying that this was also the most familiar instance of Beethoven utilizing the music of the French Revolution, something he did throughout his career. Well, that pungent insight illuminated the entire symphony for me. Partly because of Warren-Green’s remarks, a piece that I had come to regard – and describe – as the most perfect ever written became freshly infused with its revolutionary spirit and elemental fire. Repeated hearings of recorded performance, I realized, had dimmed that fire for me. 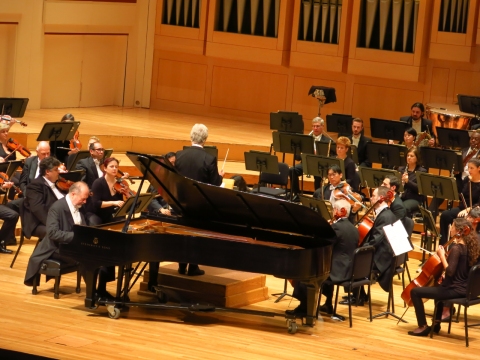 Even in the relatively quiescent third movement, mostly notable for its 3/4 time and exquisite pizzicatos, there are brief outbreaks of revolutionary marching spirit, and afterwards, a gentle thrumming of the seething timpani as the whole simmering string section comes majestically to a boil and explodes – with a mighty entrance of trumpets – into the joyous, triumphant finale.

From the outset, Warren-Green spikes the sforzandos with terrific force, but the opening Allegro also features fine spots by principal oboist Hollis Ulaky and the French hornist to mellow the brew. It’s the trumpets that ignite the revolutionary fervor at the beginning of second movement Andante, exactly the kind of march that Warren-Green’s prefatory remarks suggested, but you’ll also hit a heavenly patch from the cellos that struck me as a foretaste of Wagner’s Rhein at this listen. Wonderful hushes of strings here hit me as one of the underappreciated reasons why we adore Beethoven. Some exquisite work lightly showered from flutists Amy Orsinger Whitehead and principal Victor Wang.

Maybe Erinn Frechette as well. From my vantage point up in the Grand Tier, I didn’t notice her until I heard her amid the tutti of the final Allegro, when she picked up her Little David of instruments, the piccolo. There she was, perfectly obscured in my line of sight behind Warren-Green! By contrast, I had noticed the elephantine contrabassoon lying neglected on its stand all evening. Only when the whole orchestra was wailing underneath Frechette in the symphony’s full-throated climax did I realize that Lori Tiberio had picked up her lumbering Goliath and was playing with everyone else. Why Beethoven had bothered with her and her contrabassoon I couldn’t say, for I cannot claim to have heard a single note.

I’m sure it was there. But I’ll stop short of making another claim, for I’d likely be surrendering a chunk of my judicial credibility if I told you that Beethoven not only wrote more stirring movements than the immortal “Da-da-da-DAA,” but that one of them is just a short distance down the road in the same Fifth Symphony. That’s one key reason why you need to experience this orchestra playing this music in live performance at the Belk.