Review:  Confidence (and The Speech) 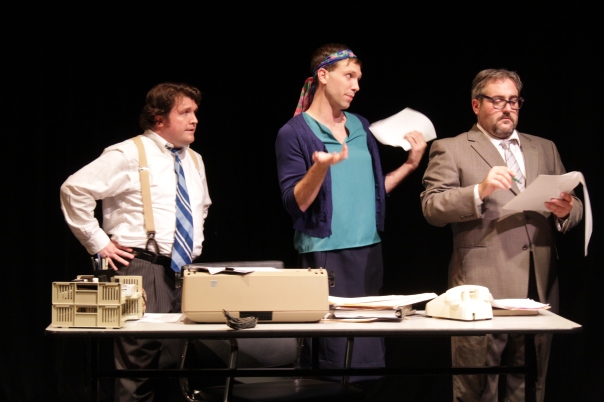 Say what you want about Jimmy Carter, he wasn’t about lining his pockets with money or telling other nations what to do, and he certainly wasn’t about cozying up to the Russians. Among his more controversial – and principled – actions, President Carter slapped a grain embargo on Russia in response to their invasion of Afghanistan and pulled us out of the 1980 Summer Olympics in Moscow. In the midst of an energy crisis, Carter faced a TV camera inside the Oval Office and, wearing a drab cardigan sweater, urged a nationwide audience to turn down their thermostats to 68ºF. After the turmoil of Nixon, Cambodia, and Watergate, President Carter was barely in office two days when he granted blanket amnesty for Vietnam War draft evaders. Probably his most egregious faux pas was reminding wasteful and self-indulgent Americans that we were wasteful and self-indulgent, that two-thirds of us were so apathetic that we didn’t bother to vote, that there was a growing distrust of government and the press, and that our nation’s self-confidence was slowly eroding. Free spending and trickle-down Reaganomics proved to be far more palatable to our shrewd electorate. 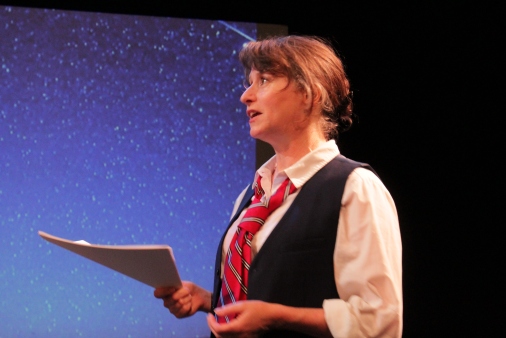 Using the pivotal “Crisis of Confidence speech of 1979 as her ground zero, with occasional traces of animus from the shocking 2016 election result, playwright Susan Lambert Hatem reappraises Carter’s leadership and courage in Confidence (and The Speech). Hatem’s sister, producer Anne Lambert, is directing a workshop production of the new play at Spirit Square with the company she founded, Charlotte’s Off Broadway. Taking us to Camp David, where Carter took an extra 10 days to refine his address – convening a domestic summit where he gathered ideas from “business and labor, teachers and preachers, Governors, mayors, and private citizens” – Hatem also trains a critical eye on how much input and impact women had on the deliberations. Seven years after Helen Reddy’s “I Am Woman,” it wasn’t exactly a roar.

To look at the Camp David process pointedly from this outsider’s angle, Hatem erects an unusual framework. For her eyes and ears, the playwright recruits a somewhat disillusioned history professor, Cynthia Cooper, who served as a White House intern when Carter’s national address was being crafted. We’re not exactly sure when young Jonathan Rollins approaches Cooper after one of her lectures (not until the end of the evening, anyway), asking her for her reminiscences on Carter, but his persistence is rewarded. There is one catch: Cooper will take us behind the scenes at Camp David only if she portrays President Carter in the retelling. Rollins will need to switch genders as well and portray the young Cynthia.

Josephine Hall takes on the challenge of rekindling our affection for Carter, and she captures 39’s dignity, determination, and quiet uprightness rather well, but the hours she presumably spent watching YouTube videos of Carter have been wasted. She hasn’t listened well enough to produce Jimmy’s distinct Georgia sound, producing a generic drawl that London and New York would deem adequate for their most pallid Tennessee Williams revivals. Nor does Hatem take the opportunity to shine a bright light on the difference a woman in a pantsuit and heels might have made if she had been standing in Carter’s shoes. Unexpectedly, Hall does her best work during her technically impossible private scenes with Rosalynn Carter and in the equally impossible town hall segment when Jimmy listens to the voice of the people and responds. These responses are improvised at every performance, for three audience members will be chosen to give input to the President on key questions facing the nation. 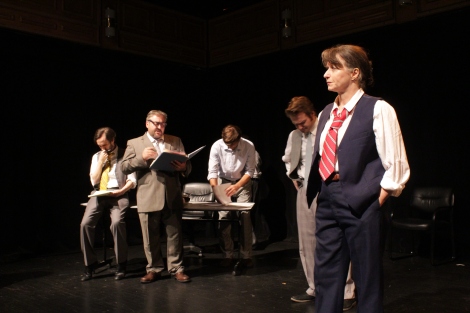 Subjected to unwanted advances when he becomes Young Cynthia – and relegated to typing up notes and brewing coffee – Jonathan Hoskins drew a more revelatory role as Rollins. The harassment and abrasive sexism come from pollster Pat Caddell as Cynthia gathers information and works with speechwriter Hendrick Hertzberg. Hoskins gave us enough prissy drag comedy mincing around in heels to effectively contrast and underscore those serious moments when Young Cynthia was being ignored, patronized and disrespected. Another fine episode lies in wait for Hoskins at the end when Rollins sheds his importunate and demure pretenses to reveal his true identity. These are the moments when Hatem is most successful.

Focusing on the polls, the process, and the pragmatism of aligning the speech with Carter’s re-election prospects, Hatem neglects the content of the speech and how it responded to the crises it addressed. It all seemed so promising and convincing in the playwright’s rendering of the first staff meeting at Camp David. In addition to those already named, press secretary Jody Powell, chief of staff Hamilton Jordan, communications director Gerald Rafshoon, and Vice President Walter Mondale all seemed professional, intelligent, and capable. All were agreed that the speech originally for July 4 had been a disastrous snooze and that Carter had been wise to postpone it at the last minute and regroup. The thrust of the message, the stakes, and the pitfalls were briskly and excitingly laid out.

After we grasped Carter’s motivations, process and practicalities stifled the flow of ideas vying for inclusion in the final draft. Rafshoon and Jordan remained thinner than cardboard and as Mondale became little more than an ominous negative voice, Powell became a glib appeaser to a press corps hungry for substance. The play veered along a similar path for us with its gender-bending protagonists, sidestepping the meat of the speech. Deepening the portraits of Rafshoon, Jordan, and Mondale would be one way for Hatem to go – leaving Maxwell Greger to ably provide comic relief as the unctuous Powell. But I suspect the better path might be for her to parade more fleetingly developed characters into the mix – those teachers and preachers and businessmen and politicians that Carter talked about in his speech. 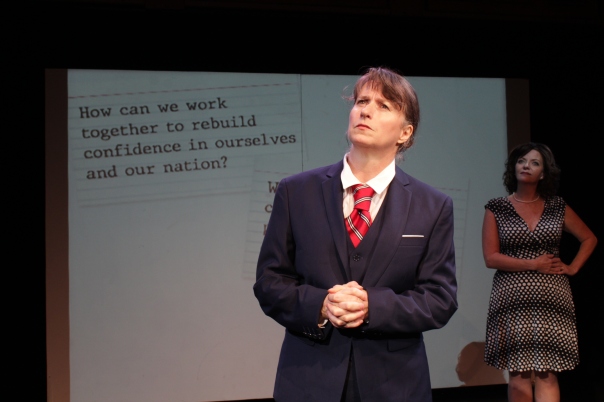 Yes, I’d advise doubling and tripling the roles of the staffers. Then Josh Logsdon would have more to do than Mondale’s brooding fatalism, the criminally underused Berry Newkirk could more fully display the full spectrum of his talents, and Paul Gibson as Jordan could flub a more interesting variety of lines. That tack would also present ways of sneaking in more background info about 1979 America and let us outside of the White House West Wing bubble that Hatem creates. With those enrichment opportunities missed, Greg Paroff as Hertzberg, both avuncular and ambivalent, emerged as the most compelling performer in a supporting role while Nathaniel Gillespie was convincingly cringeworthy as Caddell.

Technically, the Charlotte’s Off-Broadway production also disclosed its workshop status. The upstage screens weren’t utilized nearly enough for projections, furniture occasionally boomed or rattled backstage, and on one unfortunate occasion, a folding table failed to become Young Cynthia’s bed for a bedroom scene. But the Lambert sisters’ efforts eventually made a favorable impression on me with a new resolution that Hatem wrote in response to the catastrophe of Election Night 2016. I really shouldn’t reveal what happens, but I will say that it brought tears to my eyes – for a poignant reason I’ve never experienced before: knowing that what I was seeing and hearing onstage couldn’t possibly be true.