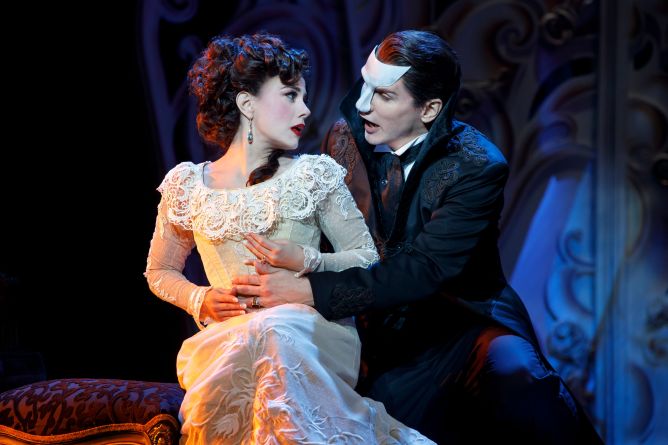 Your knees won’t buckle when you enter Belk Theater to see Love Never Dies, Anthony Lloyd Webber’s long-awaited sequel to The Phantom of the Opera. There’s no gleaming chandelier looming ominously over ticketholders in the front rows, nor will you see any nooks or gargoyles spanning the stage proscenium. Until the curtain rose, about the only aspect of the new Lloyd Webber melodrama that reminded me of its predecessor on opening night was the size of the crowd who had come to see it. A near sellout – not too shabby for a musical that has never played on Broadway.

Compared with recent tours that stopped at the Belk – Lion King, Book of Mormon, Something Rotten! or even the homespun Bright Star – this new Lloyd Webber juggernaut looks rather drab before the lights go down. We find ourselves… wait, in Coney Island? Yes, the macabre Madame Giry and her bubbly, high-strung daughter Meg have spirited The Phantom far from the ill-fated Paris Opera House without telling the songbird he still obsesses over, Christine Daaé. It’s 10 years later, and The Phantom has grown fabulously wealthy as an amusement park tycoon.

So wealthy that when Oscar Hammerstein offers Christine a fortune for her to cross the Atlantic – with her husband Raoul, the Vicomte de Chagny, and her son Gustave – to make her stage comeback, The Phantom is able to double that offer without hesitation.

If only she will SING for him again!!

Now how The Phantom became so rich and why Madame and Meg Giry have been so deeply committed to him are details you will need to ferret out in Frederick Forsyth’s 1999 page-turner, The Phantom of Manhattan. Ben Elton’s book is very loosely based on the Forsyth sequel, changing nearly as much as he left out. Specifically where The Phantom expects Christine to sing is rather vague, and the chief reason for his having a subterranean lair is to echo his old Paris Opera surroundings.

Elton changes Lloyd Webber’s previous work with hardly less impunity. If you remember Phantom well, you’ll be surprised to learn that Gustave is the lovechild of The Phantom and Christine – and that Christine feels spurned, jilted, and cruelly deceived by her former kidnapper. Many things must change in the sequel simply because there is little compulsion for Christine to be at The Phantom’s park, his hotel, his theater, or whatever. Opera was Christine’s life and soul back in her Paris days. Yet he hasn’t even written a new opera for her. Just one song. The nerve!

You’re forgiven, then, if you feel disoriented in the world of Lloyd Webber’s Phantom sequel. But there are vivid echoes of the past in the music and the love triangle at the core of the story. The most exciting new wrinkle is the five-way tug of war over Gustave. Not only are the lovers fighting over the boy. Less forthrightly, so are the Girys, who see him as an obstacle between them and The Phantom’s estate. It’s borderline comical how the good people who love him repeatedly lose track of poor Gustave. It’s a high proportion of the melodrama.

Lloyd Webber’s music is in the vein of Phantom, but not nearly as good – nor as memorable as either Sunset Boulevard or The Woman in White, his most successful follow-ups before his School of Rock comeback. “Till I Hear You Sing” gets us off to a promising start, extensively echoing Phantom as the masked composer bemoans his ten long years without his angelic muse, but until we reach the title song deep in Act 2, there was little rhapsodic flamboyance to fulfill the early promise. 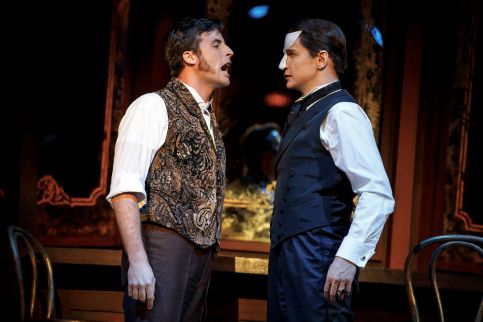 Sung by Jake Heston Miller on opening night, Gustave is a bit of an angel himself, and his duet with Mom, “Love With Your Heart,” is an ingratiating waltz. The barroom confrontation between The Phantom and Raoul has an eerie early morning edge to it, spiked with the animus of their “Devil Take the Hindmost” duet. You’ll also find a thrilling éclat in a couple of The Phantom’s entrances, for Lloyd Webber has replaced the organ, his formerly favored instrument, with pounding drums in his sequel.

Scenic and costume design, both by Gabriela Tylesova, mesh beautifully, especially effective in evoking the lights of Coney Island and Christine’s posh hotel suite. And does she also take credit for the wonderfully saturnine carriage that whisks Christine and family off to Coney? Our unofficial greeters or coachpersons – Stephen Petrovich as the gangly Gangle, rotund Richard Koon as the clownish Squelch, and the super-diminutive Katrina Kemp as Fleck – perfectly cue the phantasmagoria to come with their garish attire. Okay, they are the phantasmagoria to come, especially the Little Person.

This tour has been on the road for almost exactly one year, and the core of major players, even Miller as Gustave, has remained nearly perfectly intact. Obviously we’re seeing a solid unit that has completely jelled. Bronson Norris Murphy as The Phantom is the only interloper, rising up over the course of the tour from ensemble roles and proving to be an excellent fit from the moment the curtain first reveals him. Perhaps most indispensable is Meghan Picerno, whom I saw early last year, glittering and gay as Cunegonde in the New York City Opera production of Leonard Bernstein’s Candide.

ALW doesn’t write nearly so well in Love Never Dies, but he seems to write as stratospherically high, so I suspect a voice like Picerno’s is welcomed here for as long as she wishes. She not only nails the high notes, she also immerses herself in the passion. You’re not listening to great music when Picerno and Murphy tear into their “Beneath a Moonless Sky” duet, but you’re witnessing some riveting theatre as they lash out at each other.

Grown destitute and dissolute, Raoul isn’t the matinee idol of yore, but Sean Thompson puts some gravity into his drunken brooding, so his self-pitying “Why Does She Love Me?” acquires a Sinatra-like maturity. Madame Giry is quite the callous, grasping harpy now, but with Karen Mason so implacably dark and wicked in the role, it’s a pity that Elton and Lloyd Webber haven’t given her more space to spew her venom. On the other hand, to see Meg so debased and preoccupied with her cringe-worthy “Bathing Beauty” earns a purple heart for Mary Michael Patterson, who soldiers through these indignities every night. The spotlight does fall on her in the frantic denouement, a rather startling transformation.

While it’s difficult to forgive how thoroughly Elton and Lloyd Webber botch the Girys, my biggest beef may be with the instrumentation of Love Never Dies. If you’re going to Coney Island to evoke circus horror and grotesquery, the sound of a calliope is a must. Please fix that instantly, Lord Andrew. It’s a start.