With only string players on assignment, Charlotte Symphony was a noticeably smaller orchestra at Belk Theater last Saturday night. But with Vivaldi’s Four Seasons on the program and redheaded Aisslinn Nosky both playing the violin solos and guest conducting, the house was as unusually full as the stage was empty. People don’t merely adore Antonio Vivaldi’s signature set of concertos. If WDAV, Charlotte’s notably successful classical FM station, has it right, they also dig all things baroque. 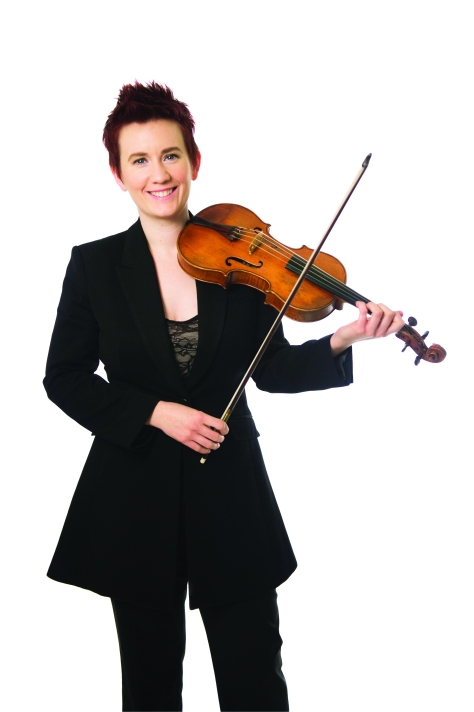 Aside from an excursion into Felix Mendelssohn’s Sinfonia for Strings No. 1 – written when the prodigy was a boy of 12 – that’s what Nosky brought to the podium. Nosky is one of the pre-eminent authenticists on the continent, having served as concertmaster for both Tafelmusik in Toronto and the Handel and Haydn Society in Boston. Historical practices and authentic historical instruments are her customary métier.

So is rocking a punk hairdo, flaming pink or fuchsia on some nights, and anchoring I Furiosi, an avant-garde quartet. With fellow emissaries from H+H, Nosky has gigged at Le Poisson Rouge, one of the hippest clubs in Greenwich Village. An aura of unpredictability shimmers around her.

Of course, Nosky adapted to Symphony by playing a modern violin, but tantalizing stylistic questions needed to be answered on how she would approach the music and Charlotte’s classical audience. Bach’s Violin Concerto No. 1 provided answers at the top of the program.

Nosky’s tone on the modern violin was laser thin and strong, most attractive just before her highest notes and infectiously cheerful with Symphony’s strings. The brisk pace that Nosky called for added to the sunniness of the opening movement, yet there was no superficiality to the lightness. When we moved to the middle Andante movement, Nosky entered with an exquisite pianissimo that was barely audible at first, swelling to full bloom while still allowing the cellos to dominate with their spare accompaniment. Spikey hairdo or not, Nosky subtly sculpted the closing Allegro, achieving a fine balance between her violin and the ensemble, building almost imperceptibly to the climax with gradual acceleration and crescendo.

As her concert-black outfit had signaled, Nosky wasn’t out to create outré sensations. The warmth of her chat with the audience, introducing Georg Philipp Telemann’s Don Quixote Suite, was an extension of principal cellist Alan Black’s earlier intro to the whole baroque program. Nosky reminded us that pianists and violinists, many doubling as famed composers, had led orchestras through most of classical music history, and she dished on the friendly rivalry between Bach and Telemann.

Notwithstanding the spikey punk do, you could bring this redhead home to meet your Republican dad.

I’ve found a CD, played and conducted by Jan Stanienda, that programs The Four Seasons and Don Quixote together, and the pairing makes sense. Both pieces are very imagistic, so the Telemann served as a fine foreshadowing for the Vivaldi. It would have been helpful, especially in the absence of any detailing from Nosky in her intro, to have seen the descriptive titles of the eight segments of the suite on the page with the program listings.

Flip ahead to the program notes, however, and the titles printed there would have better prepared you to fully savor the woeful waking of the Don, his adoration of Princess Dulcinea, Rosinante, Sancho, and the renowned windmills. What came through best without these prompts were the horsey flavors of the suite, the stately cantering of the overture, the quarter horse sprint of the windmill sketch, the sudden crowdpleasing interjections evoking Sancho’s donkey (effects Haydn would perfect), and the farewell gallop of the finale, ending not with a Rossini-like bang but with a surprising, slightly affecting fadeout.

Spearheaded by Nosky, the Symphony strings made an excellent case for the outer movements of Mendelssohn’s C Major Sinfonia, the second Allegro particularly impressive for its precocity. By comparison, the middle Andante in A minor struck me as moribund. Or I should say that it hardly struck me at all.

Nosky jokingly told us that, in view of the record cold weather outside the concert hall, she had considered only playing Vivaldi’s “Summer” concerto to warm us up. Then she promised there would be additional heat in the other Seasons – even in “Winter” – and there was. Written within the framework of four Italian sonnets, conveniently translated in our programs, the musical imagery of Four Seasons is probably best followed by playing a CD with the text in front of you, so Vivaldi’s backtracking refrains and mood-shifting don’t make you lose your place.

Not an absurd expectation at all: Symphony’s pre-New Year’s email blast to subscribers not only offered concertgoers a link to the translated poems, it also provided a Spotify playlist to The Four Seasons and the rest of last week’s Classics concert. Another handy subscription for Symphony supporters. Lack of such prep accounted for the major glitch of the night, when the audience applauded prematurely, forcing Nosky to confide that “Winter” was yet to come.

At the beginning of Four Seasons, “Spring” crests with a thunderstorm in the second half of its opening Allegro, and the onset demonstrated that there was sufficient artillery onstage at Belk Theater for the fireworks and hailstones to come. Nosky was at her most soulful in the middle Largo as the goatherd lay down to sleep in the meadow, and the sweetness lingered into the concluding pastoral dance with a nice attention to the strings’ harmonies.

Forebodings of the ultimate storm in the “Summer” concerto spread dramatic contrasts throughout the first two movements, both of which have fast sections, but it wasn’t until the concluding Presto that Vivaldi and Nosky reached their fullest fury. Here the flaming redhead was clearly torching the Red Priest, finally breaking into her bacchante mode, sustaining the lightning with a sizzling cadenza.

She is too authentic to linger in sensationalism, and there was plenty of artistry to display in the remaining concertos. Soloing in “Autumn,” it seemed to me that Nosky was caricaturing one of Vivaldi’s drunken peasants with a witty twist of her glissandos, and she made sure to emphasize the fadeout at the end of this season, reminding us of the kinship between Vivaldi’s sketchings and Telemann’s.

“Winter” was not only the most shivery season, it was also the darkest, bleakest, and loneliest as Nosky gave us a wan cadenza backed only by Black on cello. North winds howl in the final Allegro, allowing Nosky and Symphony to whip up one last tumult. Maybe the sun didn’t quite shine through this icy gloom, but the joy and warmth of the music did, just as the Red Priest prescribed.