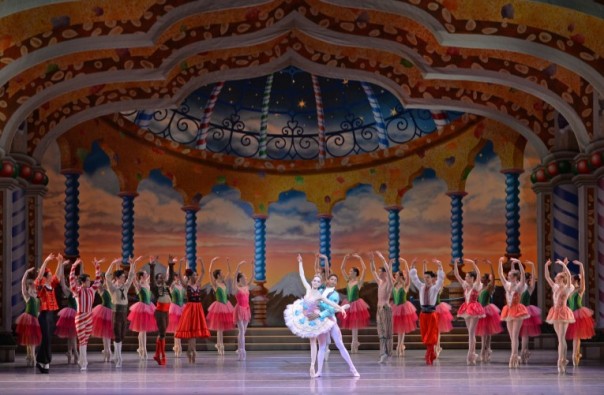 When I first heard that Charlotte Ballet would be trotting out its newish Nutcracker down in Charleston before bringing it back to the Belk Theater for its customary two-week run, it struck me as a good thing – spreading the word to South Carolina at the gloriously revamped Gaillard Municipal Center. But I hadn’t considered how the economies of putting the show on the road might affect the product at home. Musicians from the Charlotte Symphony Orchestra have been reduced this year from 60 to 35, according to Jean-Pierre Bonnefoux, the Nutcracker choreographer and past Charlotte Ballet artistic director. Furthermore, the mini-chorus that always sang from the orchestra pit in the “Waltz of the Snowflakes” at the end of Act 1 is gone. At least one orchestra member I’ve heard from isn’t pleased by the various transpositions required when you ditch the bass clarinet and are no longer tripling the flutes.

This slimmed-down score comes on the heels of last year’s million-dollar redesign of sets and costumes, austerity following ballyhooed largesse. The new sets sparkle with bright colors at the Stahlbaums’ holiday party in Act 1 and in the Land of the Sweets after intermission. The snow scenes literally glitter in both acts – and the cute little Angels float on a bed of clouds created by nicely tamed fog machines. Yet there was a two-dimensional quality to many of the new props introduced last year that, er, fell flat for me. It began, amusingly enough, with a lifesize cardboard housemaid that was wheeled out to the Stahlbaums’ anteroom and collected all the guests’ hats, coats, and scarves before wheeling back to the wings. But the two-dimensional motif didn’t end there, for the toy soldier that Herr Drosselmeyer brings for Fritz, the creatures that file off into the wings when the clock strikes midnight, the reindeer that peep into the Land of Snow, and Mother Ginger’s house are all pancake flat.

All this flattening muted bustle of the holiday party, which was deprived of the formerly grand arrivals of the Toy Doll and the Toy Soldier in cabinets, caskets, or palanquins. Mark Diamond’s shtick as Herr Drosselmeyer was radically hamstrung, stripped of his former hocus-pocus emceeing for the gift reveals, and while his leave-taking compensates a little for his no-longer-baroque-and-fussy entrance, most of the physical comedy is either gone or has lost its patina. Even the wrench Drosselmeyer used to fix Clara’s broken nutcracker seemed a shadow of its former absurdity. Where the flatness meshes with the new scenic design by Alain Vaës, the result is notably spectacular when the Christmas tree chez Stahlbaum grows to fill the entire upstage. The enchantment doesn’t stop there, for new scenery emerges behind it. Most spectacular, exceeding even Clara’s departure from the Land of Snow (escorted by the victorious Nutcracker), is Clara’s landing in the Land of Sweets below the clouds where the cute little Angels glide.

Worse than the absence of the bass clarinet for the “Dance of the Sugar Plum Fairy” (a bassoon doesn’t do) or the three flutes for the “Dance of the Reed Pipes” (barely noticeable) were the strings subbing for the mini-chorus. No matter how well they’re played, violins can’t say “Ah!” Under the baton of assistant conductor Christopher James Lees – and under the Belk stage – the Charlotte Symphony filled the hall rather nicely. With Sarah Lapointe and James Kopecky among the most elegant who have danced Sugar Plum and Cavalier, the climax of the grand “Pas de deux,” still sounded very powerful. But a subsequent listening session at home with a couple of reference recordings disclosed a shrieking piccolo that was probably missing from Tchaikovsky’s clangor at Belk Theater.

Charlotte Ballet’s dancers lifted the production high above any quibbles about props or orchestral instrumentation. The main corps and the satellite Charlotte Ballet II dancers maintained the high standard of past years while the work from apprentices, trainees, and students from the company’s academy and conservatory continues to ascend to new heights. Bonnefoux rehearsed the show in his first year away from the daily operations of the company, a great way for him to reconnect – and maybe a great burden lifted from anybody else who ventured to take on the complexities of Nutcracker casting. I was discreetly funneled into the Saturday evening performance so that I would be reviewing Cast A, the dancers who appear in all the publicity shots. An amazing 121 roles are double cast, so you can definitely say there is a Cast B. Yet there are also 21 roles that are triple cast, eight quadruples, and three – major roles – that rotate among five dancers. So on just one given night, over 150 splendid Holly Hynes costumes are in play backstage, and Bonnefoux is making sure that the cast du jour – no matter what the permutation – is in step. You can bet that he appreciates the expertise of Anita Pacylowski-Justo and Laszlo Berdo in staging and rehearsing all the student dancers.

It’s Clara and Fritz who must carry the action until Drosselmeyer dominates, so the Charlotte Ballet students aren’t merely background ornaments. Ava Gray Bobbit and Pierce Gallagher were the Stahlbaum sibs on opening night with Cast A, Gallagher one of two Fritzes and Bobbit one of four Claras. Though Gallagher absolutely reveled in Fritz’s energy and mischief making, Bobbit especially impressed me with her supple line, her perfectly calibrated childishness, and the utter ease and confidence she brought to every step. Only when Giselle MacDonald danced the Toy Doll did we ascend to the level of Charlotte Ballet II and when Maurice Mouzon Jr. followed as the Toy Soldier, we had our first brief sighting of the main company. Diamond has danced Drosselmeyer forever – yes, he gets a chunk of “Grandfather’s Dance” to strut his stuff – but he’s director of Charlotte Ballet II, not a company dancer. Even the rival rulers of the great Nutcracker war, Evan Ambrose as the Mouse King and Michael Manghini as the Nutcracker, were second-string members of Diamond’s company. Cast B digs even deeper, with company apprentices leading the Mice and the Nutcracker brigade into battle. 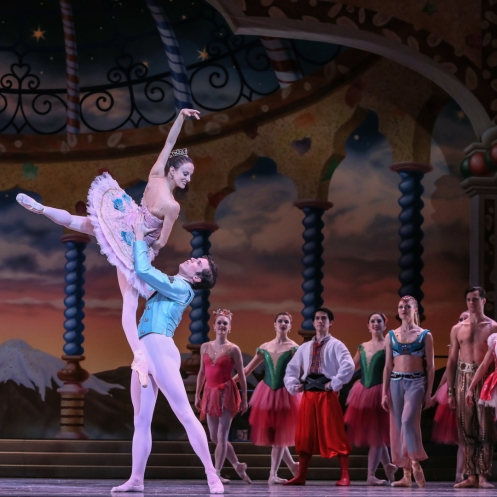 Obviously, Bonnefoux has bequeathed a very deep bench to Hope Muir, his successor as artistic director. Aside from the athleticism of Mouzon, the varsity never trod the early earthbound scenes of this resplendent Nutcracker. Only when Sarah Lapointe and James Kopecky greeted us – and the dreaming Clara – in the Land of Snow, were we finally favored with the grace of the top-tier dancers. Lapointe and Kopecky were one of four couples who will perform these rites. Each of them will rotate in some of the upcoming shows into the higher empyrean as Sugar Plum Fairy and Cavalier, welcoming Clara to the Land of Sweets. Alessandra Ball James and Josh Hall took on these starring roles at the Saturday night opening, and Ball even surpassed herself. Her line and fearlessness now nearly match her peerless musicality. No less than five different couples get to excel in Tchaikovsky’s grand “Pas de deux” during the Nutcracker run.

The new Hynes costumes against the Vaës backdrops really do make the divertissements seem even more spectacular than before, showcasing the fine men in the company. Ryo Suzuki scintillated in his first year with the troupe, so his exploits now in third year fronting the “Gopak” weren’t revelatory. On the other hand, Juwan Alston brought amazing hangtime to his leaps in “Candy Cane,” even if he did teeter a bit on his final landing, and Humberto Ramazzina from Ballet II had an eye-popping precision in the “Chinese Tea.” Amelia Sturt-Dilley and Ben Ingel weren’t the most exotic purveyors of the Arabian “Coffee” duet that I’ve seen over the years, but they radiated sizzling sensual heat.

You almost wished that Charlotte Ballet could have trotted out an overhead camera or mirror when the last of the company’s great ballerinas, Sarah Hayes Harkins, made her decorous appearance as Rose at the center of the gorgeous “Waltz of the Flowers.” At the florid beginning and ending of the piece, Harkins was encircled by a dozen Flowers – petals, really, in Bonnefoux’s imagery – her height vis-à-vis the student dancers beautifully highlighted. Nothing less than the climactic “Pas de deux” could follow such pure, innocent beauty.