Ever since Verdi’s Requiem was first presented in 1874, singers and musicians have often observed that the composer, not a particularly religious man, steered the text of the Roman Catholic funeral mass in the direction of opera. Considering that Verdi had begun this work as a tribute to Rossini shortly after his death in 1868, those observations may be precisely what Verdi intended. Arranger/conductor Murry Sidlin offered a new perspective in Defiant Requiem: Verdi at Terezín with his new version of the Requiem for chorus, soloists and piano that premiered at the Anne R. Belk Theater on the UNC Charlotte campus. His pared-down instrumentation was not an arbitrary choice. Sidlin was aiming to pay tribute to Rafael Schächter, the Holocaust victim who organized and led the choir of Jewish prisoners that performed for the International Red Cross during their infamous inspection of the Theresienstadt concentration camp in June 1944.

In a miracle that faintly echoes the Hanukkah miracle, Schächter only had a single musical score – for piano and chorus – when the pianist-conductor arrived at Terezín. From that one little musical light, Schächter forged a chorus that offered solace to its members at evening rehearsals after hard days of labor at the concentration camp. And in the text of the Requiem, he found a massive voice that would “sing to the Nazis what we cannot say to them.”

Interspersed with a recreation of the 16 performances that Schächter conducted for the edification and delight of their fellow prisoners (there is no evidence that the Nazis in attendance were ever entertained or that those Red Cross emissaries were ever enlightened), Sidlin has interspersed clips from Defiant Requiem, a documentary that tells the story of the Theresienstadt Chorus with help from filmed interviews of its living survivors. There were also segments where Sidlin himself, turning towards us after conducting a section of the Requiem, would add his voice to the narrative. If that weren’t enough to evoke the presence of Schächter and the role he played at the original performances, one of the two actors who stepped out of the chorus and participated in this unique concert drama also portrayed Schächter.

Defiant Requiem: Verdi at Terezín has been around since 2002 and has twice been presented at New York’s Lincoln Center in Avery Fisher Hall. But those 2013 and 2015 performances at the home of the NY Philharmonic were with full orchestras. What we saw at the Anne R. Belk may have literally proven that less is more, for the replication of Schächter’s performances was certainly more faithful with just a single piano – plus a violin – replacing the orchestra at a more intimate venue. Nor was the drama diminished when we learned that the final Theresienstadt Requiem for the Red Cross was performed by a depleted choir of about 60 members: the choral group standing before us, from The University Chorale and We Are Sine Nomine, numbered 62 according to our program booklets.

Stripped down to these essentials, and replenished with the contexts supplied by Sidlin and the documentary, what usually sounds devotional and fearful now felt, by turns, poignant and defiant, dripping with vengeful fury. The “Kyrie eleison” (Lord, have mercy on us), sung first by tenor soloist Brian Cheney and followed by bass Carl DuPont, soprano Christina Pier, and mezzo Victoria Livengood sounded less like a supplication than a demand.

When the full chorus broke in with their first “Dies irae” (Day of wrath), the performance actually increased in its defiance. Prior to the ensuing “Tuba mirum” chorale, an extended solo from Arlene Shrut firmly established that the piano wasn’t to be limited to passive comping. The hushed pianissimos after DuPont softly uttered his last “Mors stupebit” (Death shall stand amazed) had a solemn eeriness that was unprecedented in the performances and DVD that I’d previously witnessed. Livengood, more reliably dramatic than on-pitch, was regally up to her supreme moment of defiance in “Liber scriptus” (Written book), where she proclaimed – with prophetic volume and fury – that on the Day of Judgment, “what is hidden shall be made manifest, nothing shall be unavenged.”

Spitting defiance in the face of the Nazis and obliquely sending an SOS to the Red Cross were the most important aspects of Schächter’s payload, but the intervening narrative gave us more nuance. There were Jews at Terezín who objected to the embrace of a Catholic Mass – and to the danger that the conductor was subjecting his choristers to should their defiant message be fully grasped by the Nazis. These nuances came from the lips of the survivors on film, who clearly viewed Schächter as an inspiration, a godsend, and even a lifesaver.

idlin’s concert drama also drove home the point that, for the Terezín singers, the “Libera me” (Deliver me) was no longer a plea to be spared from fires of hell sometime in the indeterminate future but a plea to be delivered now from their monstrous captors. Another set of testimonies told us of the uplift that the choristers felt singing the “Sanctus” (Holy, holy, holy) section of the Requiem. Somehow it escaped Sidlin that the first two lines of this section are translated from one of the most sacred Hebrew prayers, when pious Jews not only rise to recite the words but also rise on tiptoe for each of the three “Holies.”

There was plenty of engaging lagniappe to make up for this omission, including a memorable evocation of the artistic beehive of musical activity happening nightly at Theresienstadt, intertwining wisps of Schubert’s “Trout” with “Bei Mir bist du Schoen” and the bittersweet Russian Yiddish folksong, “Tumbalalaika.” But the most sobering addition that Sidlin made to his drama came in the coda that he added on after the Requiem. Instead of the customary applause, we were prompted to remain silent as the musicians filed down the aisles through hall and out into the lobby.

Violinist Oliver Kot was the only musician who remained onstage, and the exit music that he played was the melody to another prayer, the “Oseh Shalom.” It’s not only the most frequently uttered sentence in synagogue, it’s also the ending to two of our most important prayers, the “Amidah” and the various permutations of the “Kaddish” – half, full, teachers’ and mourner’s. “The maker of peace in his high places, he will make peace for us and for all Israel, and let us say, ‘Amen.’” Iconic last words, for it is customary to say them in Hebrew while taking three steps backwards, as if taking leave of a king. 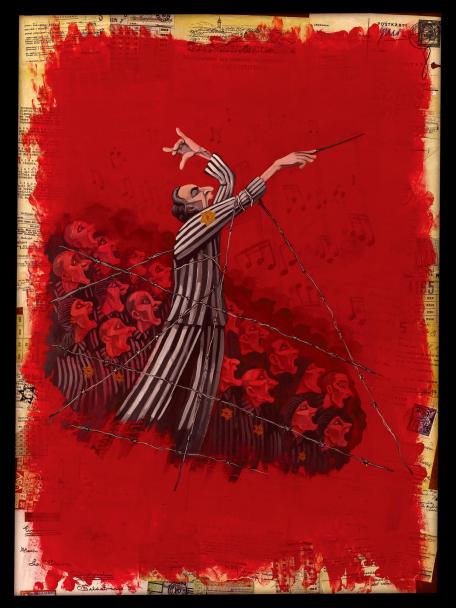 The new ending (a clarinetist had played it in previous orchestral performances) doubly evoked Fiddler on the Roof for me. All productions of Fiddler begin with the sound of a single violinist and many end that way. When I played Motel the Tailor in a 1987 production by Rock Hill Little Theatre at Winthrop University, it was my honor, under the cover of all the helter-skelter of Jews leaving Anatevka by decree of the Russian Czar, to light a single candle. That candle remained lit – on Tevye the Dairyman’s wagon – after the entire cast had left the stage, our tribute to the Six Million. Sidler’s staging could be taken the same way or as a direct tribute to Schächter and the Theresienstadt choristers who didn’t survive the Holocaust. We learned that Schächter had been deported to Auschwitz in October 1944, four months after the Red Cross Requiem. He survived his time there, but in the spring of 1945, he died in a death march, a month before Czechoslovakia was liberated. With that last “Oseh Shalom” tacked on, Sidler succeeded in creating the illusion that we had just witnessed something tantalizingly close to the promising conductor’s final performance.

Of course, we had the luxury of listening to better singers who had musical scores and could read them. I was most impressed overall by Cheney, who excelled in the “Ingemisco” (I groan) tenor aria. Pier sang very sweetly but was occasionally underpowered compared to some of the divas who have taken on the soprano role, so her best moment wasn’t in the powerful entrance to the “Libera me” but later on after the final “Dies irae” thunder from the chorus. Cheney’s “Requiem aeterna dona eis” (Grant them eternal rest) was nothing less than sublime, floating ethereally over the hushed chorus, a timeless little capsule that reminded me how live performance can triumphantly transcend any recording.