Review:  The Bridges of Madison County

When the touring production of The Bridges of Madison County came to Knight Theater in the spring of 2016, I can easily imagine CPCC Theatre set designer James Duke watching the rusticated wooden bridge as it descended from the fly loft. “We can do that!” he would be thinking to himself. And nearly 17 months later at Halton Theater, he has done it, in a spare, taciturn design style that works well with the Midwest – in this case, Iowa – ably complemented by Jeff Childs’ lighting design. 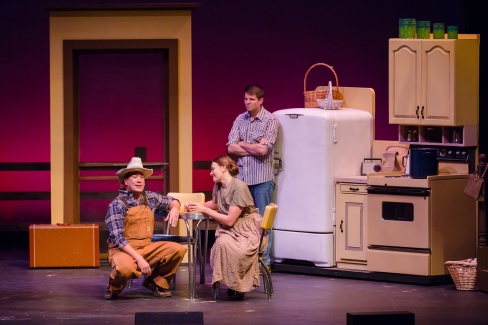 One additional inverted V goes a long way to simulating the lonely Johnson homestead where roaming National Geographic photographer Robert Kincaid falls in love with Francesca, a stoically transplanted Italian housewife marooned on the prairie after raising a wholesome 4H family. Scenery pieces at ground level aren’t quite as mistakable for the touring version, largely because crew and cast shuffle them in and out of the wings with conspicuously less professional polish.

Once everything is set in place, the sound of the current CPCC Theatre production consistently overachieves. I can also imagine Rebecca Cook-Carter, CPCC Opera Theatre’s artistic director, looking at the touring version of Madison County and saying, “We can do that!!” Look down in the orchestra pit at the Halton and you won’t find brass, woodwinds, and batteries of electric guitars and keyboards. Musicians are overwhelmingly classical string players, and their conductor, Craig Estep, has made valuable contributions to both theatrical and operatic productions at CP in the past.

In adapting the wildly popular bestseller by Robert James Waller, James Robert Brown’s score does occasionally soar toward opera in its ambitions when we listen to his melodies and orchestrations, both of which won Tony Awards. But there’s a very relaxed vibe to the roving photographer that contrasts with Francesca’s operatic frustrations, swooping toward chamber and country music. When the storyline detours toward the nosy neighbors and the raucous State Fair, velvety classical violins are likely to mutate into bluegrass fiddles.

If she hadn’t been on my radar in 2011, playing a supporting role in the CPCC Summer Theatre production of Hello, Dolly! I would have thought that Sarah Henkel was a genuine Italian neophyte as Francesca. Hand movements were shy, awkward, and clichéd at first when we looked at the opening wartime scene that tied Francesca’s fate to the uniformed Bud, who pales to humdrum farmer by the time we see him again in Iowa. 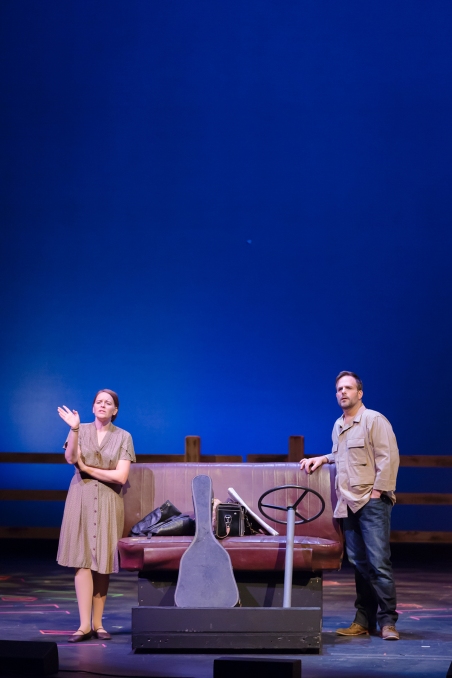 With Robert’s arrival, the shy awkwardness begins to work for Henkel, and as the couple’s intimacy increases, the fumbling and tentativeness dissolve, so there’s no longer a disconnect between Henkel’s actions and her soaring mezzo-soprano voice. I still missed a lot of the lyrics she was singing, but as passion took the place of preliminary exposition, that difficulty mattered much less. Compared with the virtually indecipherable Elizabeth Stanley on the national tour, Henkel was clarity itself.

Since I raved about Andrew Samonsky as the lanky dreamboat who captivated Francesca on tour, its no small compliment to say that Ryan Deal is nearly as fine as Robert. Deal may even be better at getting into the vagabond country lean of the music. As passionately as many local theatergoers might feel that he will never surpass his previous autumn exploits in Phantom of the Opera and Les Miz at the Halton, Deal delivers here, seemingly more comfortable in this music.

While Deal is not likely to be mistaken for a lean, rugged Marlboro man, the gap between him and Samonsky might have been bridged at least partially if Deal, along with director Cary Kugler and costume designer Rachel Engstrom, had seriously considered what a hippie looked like in 1965. To get instantly labeled as a hippie by a provincial Iowan, more hair and looser, more casual clothes are required. An untucked sport shirt just won’t do.

Politeness and consideration, mixed with a heavy sprinkling of artistic intensity, are also part of Robert’s appeal, and Deal conspires very nicely with Henkel on the chemistry of the mutual seduction. Looking at how Kugler directs and how Engstrom dresses the townsfolk, you will likely think that Marsha Norman borrowed heavily from Meredith Willson’s Music Man in crafting the Iowans in her script.

Next door neighbors, Taffy Allen as Marge and Jeff Powell as Charlie, are exactly as you would expect. She’s unsatisfied unless she’s ferretted out every spec of scandalous gossip while, even when she’s most annoying, he can be mollified with a fresh slice of pie. Closer to the vortex of the central romance, Francesca’s family is humdrum rather than silly. Steven Martin as Bud, the husband, is a solid and confident blockhead, but we get the hint from Martin that some of his cocksureness comes from Francesca’s support.

Yet Bud is the primary reason that the kids need Mom. Gabe Saienni as Michael needs Mom to help him convince Dad that there is an alternative future for him that doesn’t include taking over the farm. Sharing the role with Olivia Aldridge from night to night, Leigh Ann Hrischenko convinces us that Carolyn’s needs are even more acute and poignant. Mom stands as buffer between Carolyn and her father’s brusqueness, and despite the fact that she may have raised a prize-winning steer, it’s Mom who must bolster the younger sib’s determination and self-confidence.

As the romance heats up, Francesca must choose between her inner drive to break free and globetrot with Robert or the tug of her loyalty, calling upon her to remain in Iowa with a family that needs her. After two hours and 18 minutes, plus a 20-minute intermission, you wouldn’t want the choice to be easy, would you?