Strip away the triumphal march, the trumpets, and the whole processional parade – complete with elephants, if you’re lucky enough to see the famed outdoor productions in Verona – and we discover that Verdi’s Aïda is a rather compact story. The captured Ethiopian princess is at one corner of the love triangle, opposite her slavemistress, Princess Amneris. Both of them love Radamès, the dynamic Egyptian general who is ordained by the goddess Isis to lead the Pharaoh’s army against the forces led by King Amonasro, Aïda’s father. 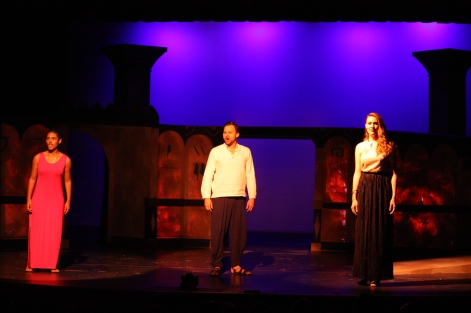 Pulling against the strong Aïda-Radamès chemistry are their loyalties to their warring countries, the jealousy of Amneris, and the obedience that Aïda owes to her father. Sealing their fates, Pharoah rewards Radamès for capturing Amonasro in battle by promising his daughter’s hand in marriage to the victorious chieftain.

It’s fascinating to watch how Linda Woolverton modernizes the 1871 libretto in her book for the Disney version currently running at Theatre Charlotte – with a couple of deft feminist touches layered on.

Raised on soaps and romcoms, modern audiences could never abide a torrid relationship between romantic leads already established before the curtain rises. So Woolverton efficiently wedges a mini-courtship into her storyline, with Radamès giving Aïda to Amneris as a gift to lighten his beloved’s sufferings in captivity.

Verdi and librettist Antonio Ghislanzoni were perfectly content to portray Amneris as a cunning, vicious shrew from beginning to end. Not Woolverton. She gives the beautiful princess a slick character arc in a thorough makeover, starting her off as a vain and pampered clothes horse on loan from Legally Blonde. Amneris evolves into a peace-loving reformer who not only empathizes with the martyred lovers but also narrates their story, three or more millennia later, returning in mummified form, a shining presence in a gooey stew of museum mystery and reincarnation.

If composer Elton John and lyricist Tim Rice had done their jobs as well as Woolverton, Aïda would be a masterwork. It’s often amusing to see what John, Rice, and Theatre Charlotte do to compensate for the absence of Verdian spectacle – but it’s never thrilling, despite the collection of talent that director Corey Mitchell has assembled at the Queens Road barn. John’s parade of power ballads grows tedious as the evening wears on, and the longueurs are compounded by unnecessary outbreaks of dance that, notwithstanding choreographer Ashlyn Summer’s exertions, display little precision and less sensuality.

Mitchell previously directed this show for Northwest School of the Arts with a little more sparkle, orchestra, and budget – a production that ran briefly at Booth Playhouse in 2009. Maybe Sir Elton’s Aïda works better in the hands of high schoolers. The one holdover from the NWSA edition, Emily Witte as Amneris, is even more stunning this time around, most notably when she hits us with the full force of her arrogance in her “My Strongest Suit” showcase. It’s the kind of superficial villainy that will deeply satisfy fans of Wicked, Glee, and Kristin Chenoweth.

There is a slight country twang to Witte’s singing that would have added a bit of unique abrasiveness to Amneris, but music director Zachary Tarlton encourages the same style from Ron T. Diaz as Radamès, so that twang becomes an Egyptian trait – as if, in Disneyworld, everybody who hails from Memphis, whether it’s Egypt or Tennessee, sounds alike.

Further detracting from the gravitas Diaz should be aiming for is Radamès’ bizarre confrontation with his father, the evil priest Zoser. You wonder just how seriously we can take either adversary when costume designer Hali Hutchison seems to be mimicking Disney’s Aladdin in designing the mighty general’s costume and Zoser’s ministers brandish glowing fuchsia staves.

Diaz never gets a shot at a passionate solo, so he shines brightest in “Elaborate Lives,” sharing the best of the power ballads with his darling Aïda. They sing it full out, face-to-face, no frills, near the end of Act 1, Victoria Fisher’s lighting dimming around them to augment the drama. Maya Sistruck does nearly the whole evening as Aïda with a simple resolute dignity, allowing herself the luxury of discernable facial expressions only at peak moments when she is romantically consumed or royally pissed. 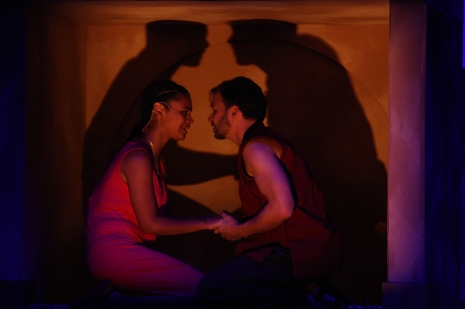 Other than taking radical precautions not to reveal her royal origins, I’m not sure what justifies Hutchison’s humble sackcloth design for a captive princess. We do upgrade to red in the palace, but why Amneris would tolerate such a plainly dressed servant is still baffling. Yet the illogic does pay off in an enduring dramatic contrast, first in the climactic tête-à-tête duet before intermission and shortly afterwards in the “Step Too Far” trio, the most self-consciously operatic moment in the John-Rice score.

While Josh Webb’s set design is no more impressive than the costumes or the choreography, budgetary constraints may have been holding him back. The cut-rate budget and the lackluster score might obscure the fact that the excellence of the cast runs deep. Aside from most of the dancers, Howl Cooper makes the only inauspicious debut as Amonasro, though he definitely has a warrior’s demeanor.

Thank heaven for vampires, witches, and pagans. Otherwise, there would be no class of people left for all of us to wholeheartedly hate.