Allowing for inflation and cost-of-living increases since 1977, fares at Becker’s Car Service seem to be fiercely competitive – so competitive that the five cab drivers at the core of August Wilson’s Jitney all seem to be barely scraping by. The drivers’ lounge, adorned with a decaying Ali-Frazier poster, has a ramshackle look to it with a dust-colored couch held together by generous swaths of duct tape.

We never see whether the drivers’ jitneys (slang for gypsy cabs) are in any better repair than this crumbling HQ, but the idea seeps in that the struggling black customers in the Hill district of Pittsburgh are in no position to press the point. Early on in this fine BNS Productions effort at Spirit Square, director Corlis Hayes pushes the pace hard enough for us to assume that we’re in the midst of an urban rush hour. 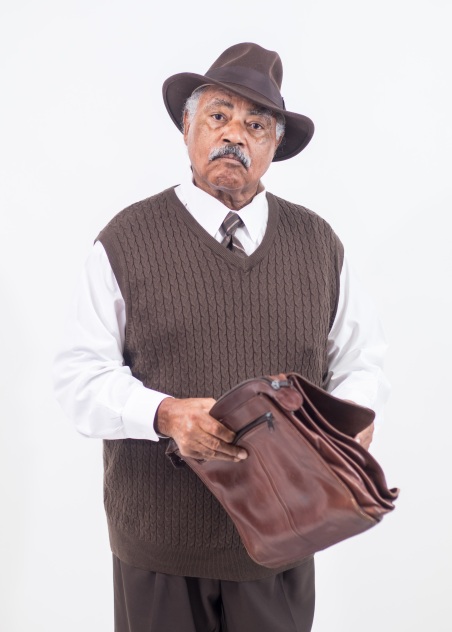 These are men in a hurry – who aren’t necessarily getting anywhere. Pretty much the same can be said for Wilson’s story until Becker himself arrives. He takes off a fedora hat and lays down a satchel, signs that he’s better off than his employees, but he takes turns answering the phone – a pay phone – and giving rides. Still not rushing his story along in his flurry of driver entrances and exits, Wilson has Becker announcing two key strands of the plot.

After keeping it from his drivers a little longer than he should, Becker tells Doub, his steadiest driver, that the city has earmarked the property for urban renewal. The Car Service office will be boarded up in a matter of weeks. If that weren’t enough upheaval, Becker’s son Booster is getting out of the slammer after serving 20 years for murder. Becker never visited his son even once during his incarceration, so this does not figure to be a joyous reunion.

If you’ve seen Wilson’s Fences recently, you will likely find echoes of Troy Maxson in the elder Becker’s sternness and stubbornness. If anything, the father-son chemistry will prove even more important here. But Becker is more of a people person, as he would need to be in running a business, and he has a few soft spots beneath his tough hide.

We see one of those when he gives Fielding, a former tailor who has destroyed himself with drink, yet one more chance to come back on the job and straighten himself out. Becker also shows strength and courage defusing a heated confrontation between Vietnam War vet Youngblood and the gossipy Turnbo, who has meddled in the younger driver’s domestic affairs, frustrated at not stealing his girlfriend Rena.

There’s a fascinating range of personalities and back stories among the core quintet of drivers plus the boss’s son. Baring their souls – and their motives – everybody seems to get a monologue. Nor do Hayes and lighting designer Tony Wright veil the kinship between these monologues and long, lyrical jazz solos. Hayes usually directs her actors to blow their solos straight into the Duke Energy Theater audience, while Wright intensifies the light where they deliver.

During the passionate showdown between Youngblood and Rena, where both have been right and wrong, each of the combatants has a heartfelt monologue. Yet Wilson had even more pure audacity in a casual scene where the often-comical Fielding meets the tightly-wound Booster. The playwright brashly showcases his virtuosity by unleashing two consecutive monologues, one by the rueful Fielding recalling his better days when he tailored suits for Billy Eckstein and Count Basie, followed by Booster’s recollection of his first hard lesson in life when, as a child, he had a vivid dream about riding a red bicycle.

With so many monologues so evenly distributed, you need a cast that’s strong, deep and – when Wilson digresses – engaging. Hayes and producer Rory D. Sheriff have definitely produced with this ensemble. Though he isn’t given free enough rein in the opening scene as Fielding (we should be sure that the $4 he borrows from Doub will go toward refilling his whisky flask), Gerard Hazleton shoulders enough of the drunkard’s comedy without letting us lose our warm feelings toward him.

There’s a little more comedy squeezed from the gossipy Turnbo by Tim Bradley, probably because his sleaziness and nosiness are so outrageous, but he also forces us to take him seriously when he goes ballistic on Youngblood. More on the periphery, James Lee Walker II gives the local numbers runner, Shealy, a dandified flair though we still empathize with his romantic difficulties. On the other end of the cunning spectrum, Danius Jones makes Philmore a singularly quirky and clueless passenger, attaining full dopiness only when he returns in his bellhop uniform.

Partly because they subtly echo the central father-son relationship, Doub and Youngblood are closer to the heart of Wilson’s drama than the men who garnish it with comedy or the colorful aspects of city life. Both of them are war vets, but Youngblood – if not as senseless as Turnbo makes him out to be – has been slightly warped by his Vietnam experience. Doub, traumatized and shaken to his core in the Korean War, has retained a stone-cold outlook beneath his cheery, avuncular demeanor.

With Keith Logan delivering Doub’s Korea monologue, it becomes the warmest moment of the evening, transcending its payload of advice for Youngblood. In its tacit acknowledgement of Youngblood’s essential goodness – and his confidence in Youngblood’s ability to benefit from sound advice – he’s a perfect model of the parenting skills that Becker lacks. Ironically, there are times when Logan’s acting is similarly exemplary for Jonathan Caldwell. While Caldwell brilliantly projects Youngblood’s immaturity and confusion, he could use a tip or two on either quickening his cue pickup or timing his delayed reactions.

Caldwell’s occasional awkwardness may slightly mar Youngblood’s scenes with Doub and Turnbo, but it meshes very well with Juanita Green in the confrontations with Rena. Hayes decrees a more conciliatory rapport between the lovers when we last see them than you might find in other productions, but Green keeps this becalmed closure from becoming saccharine.

Although Becker isn’t quite the perfect boss, he deals empathetically with his drivers, so there needs to be a powerful reason why he is so cold and cruel toward his son. John W. Price provides it indelibly in the most electrifying monologue of the night. The fire and thunder from Price as he’s excoriating Booster are unlike anything I’ve seen or heard from him before, fueled by white-hot fury and pain.

It’s an earthquake, and you can see Jermaine Gamble as Booster trembling amid the seismic shock. We get the idea from Gamble that Becker’s boy has grown up, hardened by prison, a fully formed yet scarred individual. Booster does fire back at his dad, but Gamble acutely calibrates the restraint and the hope that are wrapped into his resentments, almost like he’s still an adolescent in his father’s presence. It’s simply respect – all the more moving for its futility.

Within the space of two weeks, we’ve heard from two playwrights, Jeff Talbott in The Submission and August Wilson in Jitney, who have ignited their peak moments with the N-word. This one is far more unexpected – and shattering.