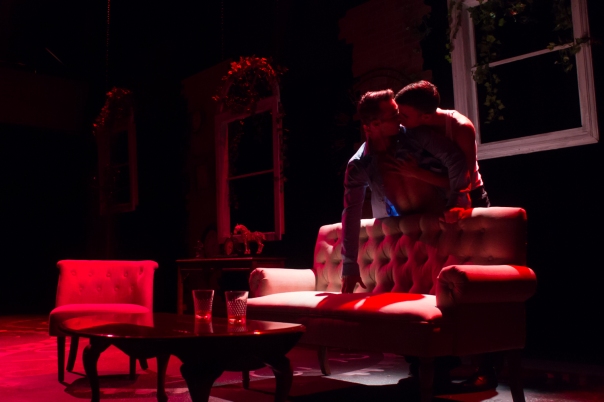 Back in the late 1950s, Philip has decided that his deep feelings for Oliver are a repugnant disease rather than a natural attraction. But in Alexi Kaye Campbell’s The Pride, there is another Philip, 50 years later in 2008, who is also crazy about Oliver. Since there are no longer any prohibitions or taboos against homosexuality, Philip now wishes to have a strong and exclusive relationship with Oliver, who still loves him.

Yet as we quickly see in the Queen City Theatre Company production, now at Spirit Square through Saturday, there is still a catch. Exclusivity is under siege. When we first encounter the modern-day Oliver, Philip will walk in on him moments after a casual hookup has gone sour with a sex worker who has dressed up in a Nazi uniform for their sadistic tryst. Finding his wayward partner in this compromising state hardens Philip’s resolve to move out of the apartment they’re sharing, so he leaves.

More radical measures are necessary in 1958. Philip goes to a Doctor who will crush the so-called perversion that lurks inside. Obviously, there is something sinister about this Doctor, augmented by Emily Eudy’s lighting design. We might find a more pointed message embedded in Campbell’s curious 1958-2008 juxtapositions: he means us to see that the sexual adjustment Doctor is a kind of Nazi – because he and the sex worker both reinforce Philip’s feeling that his relationship with Oliver is wrong, and because they are both played by the same actor.

And there you have The Pride in a nutshell, a colorfully told pair of stories, liberally sprinkled with humor, which yields up its messages obliquely through its strange juxtapositions. Because the same actors do both Philips and both Olivers, we likely assume they’re the same souls in two different eras. If they stand before us more than speculatively, reincarnated in our current millennium, then those 1958 blokes need to hurry up and die in order to reach their late 20s or early 30s just 50 years later.

Trouble is, for anybody who wishes to “get” The Pride, Campbell is as content to leave the question of what we’re seeing as open as the question of what our takeaway should be. Enjoying the show comes more easily, for director Glenn T. Griffin has brilliantly cast his men. Steven Buchanan brings an urbane twinkle to the free-spirited Olivers, yet there is a predatory edge to his persistent pursuit. We see something more intense than resistance from Cory Collins as the two Philips in reaction to the Olivers, closer to absolute loathing – some of it directed toward himself.

So this tightly-wound, comparatively starchy guy will snap unexpectedly, and Collins, Buchanan, and Griffin conspire to stage that moment superbly. What often cools the momentum established by Buchanan and Collins are the scenes with the two Sylvias. In 1958, she’s Philip’s wife, instrumental in bringing her husband close to Oliver, a children’s book author that she’s illustrating for; and in 2008, she’s an actress and Oliver’s close confidante.

Wearing two different Barbi Van Schaick wigs that help us to quickly differentiate between the two eras, Katie Addison is credible enough as the two Sylvias – but she’s only fitfully intelligible. Sifting through Addison’s British accent is so difficult that I could fully lose my grasp on what was happening when she was onstage.

No such problems when Michael Harris came along for his two bizarre roles. When Harris’s arms and wrists go limp as he switches from Nazi role-playing to the sex worker’s everyday personality, it’s an absolute hoot, amplified by Beth Killion’s radically contrasting costume designs. On the other hand, Harris was slightly terrifying as The Doctor, hardly better than Nazis in his steely contempt for gays.

This is how it was in most of the ostensibly civilized world 50+ years ago, and this is what we could be going back to in the era of HB2.