Now in its fourth year, Rouge began as a slightly naughty variety show featuring Caroline Calouche & Co.‘s signature aerial choreography, with a naughty cabaret twist that meshed well with its October timeslot – and a late 9:30 pm performance that was a novelty for dance in Charlotte. Compared to the Nutcracker Rouge that I sampled last winter in an off-Broadway production, the first two CC&Co. editions of Rouge barely grazed the possibilities of risqué dance. Absent from the spectacles at Booth Playhouse were the profusion of pasties, satyrs, fauns, and cross-dressing men that I witnessed in Greenwich Village, all ganging up on an innocent virgin and serving as her initiation into the rites of eroticism. So if the Charlotte troupe had no intention of following a similar trail, it was prudent for the company to retreat from October, when steamier saturnalia might be expected, to a sunnier timeslot in August. Here the modest moves toward cabaret decadence and S&M stylings actually seemed more daring.

Yet the move to a balmier season didn’t absolve Calouche & Co. of the obligation to embrace cabaret naughtiness with gusto. If the opening tableau with three couples intertwining downstage and four females behind them straddling chairs was any indication of how the company would attack the can-can, then I could be grateful that I was spared from seeing a kickline that would have proven they can’t-can’t. Couples went through the motions of sensuous contact without either the heat or the enjoyment that would bring the choreography vividly to life, and the women on those chairs did little more than occupy them. A “Take It Easy” duet with Javier Gonzalez and Sarah Ritchy, some segments aerial and others on the floor, generated a little heat, but the closest we came to flame was Calouche’s “It Takes Two” aerial coupling with Anthony Oliva, introduced by hostess/songstress Rachael Houdek as the evening’s BDSM segment and boasting black costumes to match.

Set to some orgiastic guitar blues, something in this aerial choreography was definitely simmering. 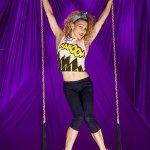 Hosting for the fourth time, Houdek seems to get what CC&Co. is about much better than she did in her first two years, and her singing has improved as much as her poise, most noticeably on “Creep,” the penultimate number on the Rouge 2016 program. Keeping the show fresh were five other guest performers, including the Von Howard Project from New York. Dancing the choreography of Christian von Howard, this trio of dancers – Breeanah Breeden, Jake Deibert, and Tracy Dunbar – were the gray antithesis of an orgiastic rouge spirit as they performed “Seeker”: eerily fluid, urban, dystopic, and occasionally extraterrestrial. Notwithstanding their discordant vibe, I wished Von Howard Project had offered us second and third helpings.

I can warily say the same about Atlanta-based Nicole Mermans, who delighted me midway during the second half of the evening with her “Tousled” on an aerial sling. Aerial pieces rarely strive for comedy, but this one had slapstick elements, set to a klezmer score. Hopefully, other pieces Mermans has devised would be equally unique, perhaps on an assortment of apparatuses. After watching aerial acts for a number of years, I’ve concluded that the number of moves available on each apparatus – particularly the aerial silks – is probably more limited than the number afforded by such gymnastic apparatuses as the rings, the pommel horse, or the balance beam. So are the risks after the performer has mastered each skill. 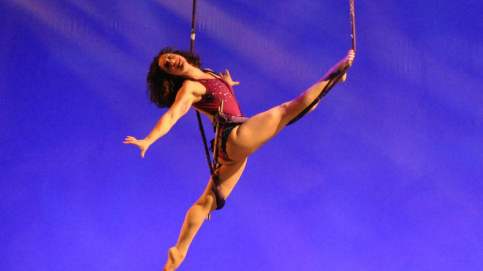 So I was pleased that Rouge presented the wide variety of equipment that CC&Co. has accustomed its audience to, including Gwynne Flanagan from DC on trapeze and Molly Graves from Vermont on aerial rope. The only guest soloist who disappointed was Jen MacQueen from Atlanta, who only showed me moves on the cyr wheel that already I’d seen many, many times since the days that Cirque du Soleil first began touring. To her credit, Calouche has fortified her troupe to such an extent that the aforementioned members of the troupe – Gonzalez, Ritchy, and Oliva – aren’t alone in being able to perform to the level of the guest artists. Sarah Small performed a gorgeous aerial solo silhouetted behind a translucent disc, choreographed to an instrumental adaptation of Dvořák’s “Moon Song,” and though he wasn’t airborne at all, Jake StainbackSarah Small’s talents as an ecdysiast were singular nevertheless.

After the busy opening and the Von Howard Project spot, there were other segments featuring three or more performers, including a bouncy bungee trio (with some unseen complicity up in the fly loft) and an aerial finale on a massive twin-cube apparatus that could accommodate four performers simultaneously. My favorite was the semi-spontaneous segment that brought us to intermission, which began with Houdek picking out a conspicuously gifted member of the audience to bust out a few of his startling dance moves. Then members of the company invaded the audience, pulling some choice prospects onstage – well, they discreetly avoided old codgers like me, anyway. All of these recruits began to show their stuff to some very festive music. I not only noticed a non-musical actor among the recruits but also a few moves from the others that were raunchier than any of the rehearsed choreography. Rouge may not be particularly wicked, risqué, or even particularly French, but it remains an impressive show – and it attracts an impressive crowd.