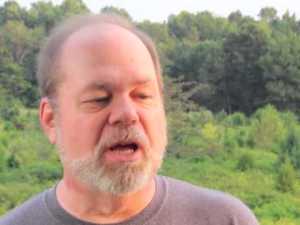 Forty years after getting free of a dirty business, Jerry still feels irrevocably soiled by the experience. Allan Gurganus’ 1991 Blessed Assurance, a novella adapted for the stage by Steve Willis, is a study of regret – and the lessons and wisdom that are its residue. Settling into an easy chair with a cup of tea at his beach house near the Outer Banks, Jerry tells us right from the start what is eating at him, robbing him of sleep as he nears 60 years of age: “I sold funeral insurance to North Carolina black people.” Jerry explains the huge cultural importance that African Americans attach to their funerals. The reasons he gives for taking the job explain why he empathizes with the people he is victimizing. He was raised in poverty in Falls, North Carolina, under the white fluffy clouds emitted by the nearby cotton mill, and his job as an insurance salesman was his ticket to a better life, helping to support his family – Dad is already afflicted with brown lung from constantly inhaling the fibers – and paying for his education. Delivered as a one-man show by actor James K. Flynn under the direction of Starving Artist Productions‘ founder Nathan Rouse, the stage version of Blessed Assurance became very much a narrative as Jerry’s confession proceeded, with some subtle literary qualities tying it together.

Pre-eminent among these is the title, familiar enough as a hymn at Gastonia’s First United Methodist Church Theatre, where this touring production is now being staged. Gurganus doesn’t drop the hymn into Jerry’s narrative until he reaches the denouement. Then it’s a bombshell, sparking Jerry to an irrational fever of self-loathing and penitence. Before then, “assurance” is the fractured way that Jerry’s black clients in Baby Africa pronounce insurance. My years as a social worker in African American homes down in Columbia, South Carolina, 30 years after the 1947-48 events that Jerry recalls, confirm not only the continued importance of funeral insurance in the community but also the pronunciation, though I recall “insurance” – the first syllable restored with a vengeance – as equally popular.

But to Vesta Lotte Battle, the most memorable of Jerry’s clientele, what he sold was “assurance.” There was nothing fraudulent about the Windlass Insurance policies, but the terms were grim for an impoverished community: miss two consecutive Saturday payments and you not only forfeit the benefits of this policy, you also forfeit all previous policies that you may have paid off in full. Selling this kind of product is not a suitable job for a man saddled with a conscience, and Jerry’s boss at Windlass tells him as much when he hires him. Switching to his boss Sam’s voice, Jerry recites the insidious words he must live by, “The minute they smell heart on you, Jer, you’re down the toilet.”

It’s a gradual, entertaining, and ultimately harrowing flush as Jerry continues to make his Saturday rounds. A freed slave from the Civil War pushing 90, Vesta has sunk enough money, quarter by quarter, to hire the Duke Ellington Band, the Goodyear blimp, and maybe Eleanor Roosevelt to brighten up her funeral. Jerry sees that and tells her so, but when Vesta can’t keep up with her payments, he starts covering for her delinquencies. It’s not only that he feels sorry for Vesta; he comes to cherish her company. We eventually may realize, with more subtlety, that it’s entirely possible that Jerry’s enjoyment of tea originated in Vesta’s humble home. Showing his heart puts Jerry in an excruciating moral dilemma. The money he’s advancing to Vesta – and numerous other impoverished residents of Baby Africa – is coming at the expense of his wheezing parents and his own educational advancement. Sam, not at all a heartless monster, notices how preternaturally careworn his star 19-year-old salesman has grown.

Flynn turned in a performance that was, by turns, warm, gripping, and funny. Willis’ script is nicely balanced for a one-man show, its two most memorable episodes enabling Flynn to establish contrasting moods. First comes the comedy, when Jerry’s ramshackle Nash breaks down during a heavy downpour. The whole destitute community seems to enjoy his misadventures as he tries fruitlessly to change his flat tire in the mud while fending off hordes of vicious stray dogs. Even more spellbinding is the scene in church, where Jerry, finally witnessing a black funeral, has his epiphany. Either one of these monologues raises Blessed Assurance above the ordinary one-man theatrical, but afterwards, there’s still a kicker held in reserve that may leave you gasping.