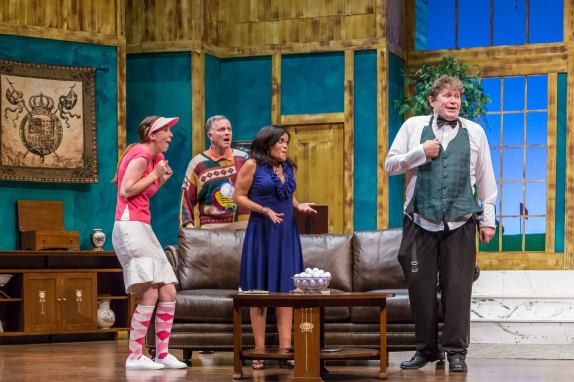 Foxhunting and golf are both centuries old, so as a fancier of farces with keen sporting interests, I was intrigued when Ken Ludwig’s The Fox on the Fairway arrived in North Carolina during the summer of 2012. Ludwig is probably the most reliable farceur our nation has produced in the past 50 years, his Moon Over Buffalo arguably an even finer example than his more renowned Lend Me a Tenor. But after its NC premiere at Flat Rock Playhouse, followed shortly afterwards with another production at Old Courthouse Theatre in Concord, the presumably inevitable Charlotte premiere still hasn’t happened. So, in spite of my recent disappointment with Davidson Community Players‘ Singin’ in the Rain, I yielded to the prospect of finally tracking down The Fox at Duke Family Performance Hall, the same place where DCP had remounted their Gene Kelly musical without either a rain shower or a sturdy lamppost.

Assuming that it wasn’t going to be subjected to undue stress, I was greatly encouraged when I first saw Clay James’ sturdy set design for the clubhouse at the Quail Valley Country Club, where all the action takes place. My optimism was immediately punctured when the fun was intended to begin. Each of the six characters we were about to see made a quick entrance, delivered a one-liner, and scooted back to the wings. Even if it were executed well, that’s a pretty cheesy way to open a show. While director Paige Johnston Thomas had apparently communicated the needs for energy and speed to her cast, the lesson of strength was either omitted or lost. I couldn’t really hear most of the words these players were blurting out, and the problem didn’t entirely disappear as the plot unfolded, though I detected improvement after intermission.

Justin is the newly hired assistant at Quail Valley, eager to please his new boss, Bingham, and even more eager to become engaged to Louise, who already works there. We soon find that Bingham has even more pressing concerns. He has been consistently losing to his condescending and underhanded rival, Dickie, in the annual tournament between his club and the Crouching Squirrel, Dickie’s club. Dickie gives Bingham 2-to-1 odds on the outcome, betting $200,000 against Bingham’s $100,000, but Bingham must also surrender his wife’s antique shop if Quail Valley loses. Before agreeing to this wager – which seems less lopsided the more you think about it – Dickie has already stolen Quail Valley’s best golfer away to the Crouching Squirrel team. And it seems that Dickie has also stolen the affections of Bingham’s nagging wife, Muriel. If that weren’t enough, Bingham’s future as president of Quail Valley hinges on the outcome of the tournament.

As it turns out, Bingham’s situation isn’t altogether hopeless. When Justin told him that he shot a 136 the last time he was out on a golf course, he neglected to mention that he had played two rounds. Then there’s his VP, Pamela, who knows her way around the technicalities of club rules well enough to quickly enroll Justin as a member, qualified to compete in the tournament. She also amply reciprocates the affection that Bingham was too shy to act upon back in the days when he was a pimply kid. Quail Valley thus has a representative who can conquer on the course if Justin can maintain his delicate equipoise. An eight-stroke lead could vanish in a heartbeat if some bad news rattles him. Now we know that is sure to happen, right? The reason, in this instance, is Louise’s inability to withhold the truth from her fiancé, even if the upshot is horrendous.

Consistency and logic prove wobbly throughout the evening. Bingham undergoes rigorous questioning when he adds Justin to his team without the customary waiting period, yet Dickie earns a free pass on taking away Quail Valley’s best golfer overnight. The whole idea of the clubs having competing teams is discarded in the blink of an eye – it’s Justin versus the traitorous Tramplemain, one-on-one. Dickie takes pains to wager on Muriel’s shop when he already has Muriel, and Louise manages to call off the engagement because Justin is justly mistrustful of her. About the only artful part of Ludwig’s plotting comes at the end, after he has detonated all his ludicrous catastrophes. Only then do we get the first inkling of what foxes have to do with anything that we’ve seen.

In this mating of unlikely disabilities, Tim Hager as the ultra-neurotic Justin was by far the more satisfying performer. With the onset of the bad news, Hager turned the club’s sofa into a hilarious prop as he unraveled all over it. Rachel Bammel was more than sufficiently juvenile as Louise, but her superabundant energy undid her whenever she spoke frantically. Hager wasn’t always entirely intelligible either, particularly in the climactic argument before intermission. Brian Rassler as Bingham and Abigail Pagán as Pamela had the right kind of hesitantly magnetic chemistry between them. I can readily forgive Pagán for being slightly younger than ideal for Pamela because she gave us a portrayal that was as vivid as Hager’s, and she was the one person on stage who consistently cared about reaching up to the mezzanine with her voice. By contrast, Rassler was always agreeably confused throughout Bingham’s many trials, his constant stress filled in the blanks when I missed the actual words.

Stuart and Leslie Jonap, as Dickie and Muriel, were equally gifted in portraying the villains, bestowing one dimension apiece to the swindling club prez and the nagging wife. Both Jonaps could also stretch to two dimensions – and turn up the heat – when the nasties invaded each other’s space. They were perfect examples of why blithe farces and community theatre companies are such a perfect fit. If only Ludwig had provided a better script, they might have been able to shine. Instead, they could only enhance the feeling that, six years after Ludwig’s play was originally staged in Washington, DC, we’re still watching a chaotic first draft of a farce. Everyone was trying so hard, but despite the heroics of Hager and Pagán, this brew never rose to the level of a TV sitcom – though I’m sure it’s as good as many that have perished as a pilot. As for the cheesy shtick that goes with the curtain calls, don’t blame Thomas. The director is only staging what’s on the page, where silliness occasionally devolves into stupidity.