Reviews: Porgy and Bess and The Importance of Being Earnest 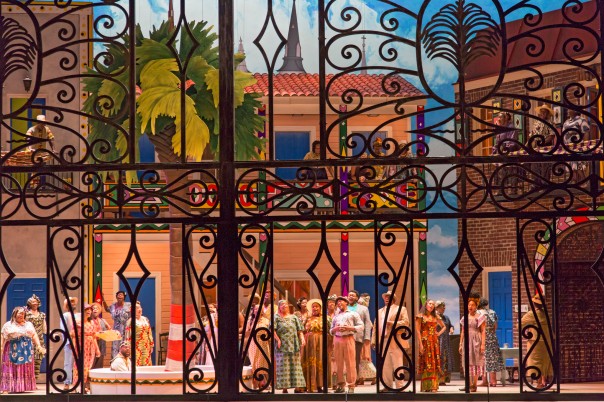 They’re not just reviving Porgy and Bess at Spoleto Festival USA. They’ve designated “Porgy Houses” in Historic Charleston, set up Porgy tours to better acquaint you with the opera’s characters and Charleston landmarks – as well as the story’s author, Charlestonian DuBose Heyward – and there are Porgy exhibits at the libraries, museums, and galleries around town.

If the combination of Spoleto Festival artistry, authentic Charleston flavor, and an impressive new performing arts palace sounds like the perfect recipe for an incomparable Porgy and Bess, it almost is. The big letdown on opening night probably resulted from director David Herskovits, conductor Stefan Asbury, and the principal players not spending sufficient rehearsal time in the new hall – or with the Gaillard’s sound crew and engineer.

My first full week listening to Spoleto performances at the Gaillard convinced me that the hall’s acoustics aren’t weak. With new speaker towers flanking the stage, performances by jazz diva René Marie on the first Sunday of Spoleto and by the Randy Weston African Rhythms Sextet on the following Thursday were as sonically rich as they were artistically satisfying. But the size of the hall took its toll on the unamplified voices of the solo vocalists on opera night. 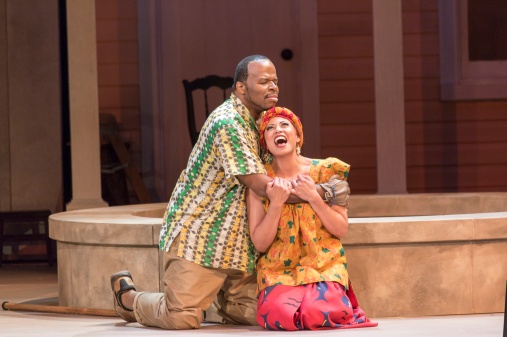 This was the most beautifully sung Porgy that I’ve heard in live performance – but the least intelligible. You get all the great music from Lester Lynch as Porgy, Alyson Cambridge as Bess, Courtney Johnson as Clara, Sidney Outlaw as Jake, Victor Ryan Robertson as Sportin’ Life, Indra Thomas as Serena, and Eric Greene as Crown. Ah, but when we cross over to the lyrics and dialogue, we might call this production Porgy and Crown, for Lynch and Greene bring the most fully arresting portrayals onstage.

Lynch as Porgy is the best I’ve heard live or on recordings, overturning the notion that the hero of this drama is a weak pathetic cripple. Here Porgy returns from his police examination on the humble sledge we often associate with him, but in this production, we have long since become accustomed to seeing him with a cane or in a quite respectable wheelchair. A couple of those wheelchairs, including the one that’s outfitted for his trip to New York at the triumphant conclusion, are fit for a tribal king.

Green’s scenic and costume designs similarly overturn the perception that the people of Catfish Row are poor, oppressed, ignorant, and uncultured. Green and Herskovits have both asserted that African-American culture is the soul of Charleston – and that it has been for nearly 400 years. Part of Porgy’s strength and confidence becomes manifest, Herskovits has noted, when he allows Bess to join the townspeople at the fateful excursion to Kittiwah Island.

The other parts are evident in Lynch’s voice. Not a word is changed here, but we gradually realize that the pity we have felt for Porgy in the past has been fashioned by actors who have portrayed him, by their pitying co-stars and directors, and by our conditioned responses. A descendant of one of the signers of the Declaration of Independence, Heyward discreetly hid a withered arm throughout his life, so his sympathies – as well as the original title of his novel – are definitely with Porgy.

Torn between three men, Bess’s apparent strength gradually vanishes in a haze of submissiveness, fatalism, and happy dust. While Cambridge fully captures Bess’s inner turmoil and anguish in her voice, her vowels migrate into Sopranoland, where the love of her life is transformed into “Pogah” and she neither talks the talk nor walks the walk. I’m really not sure Cambridge had a clue what was going on when she tossed Crown her “look at what arms you got” line. But when she pleads with Porgy that “it’s gonna feel like dyin’” if Crown takes her away, the urgency is primal. 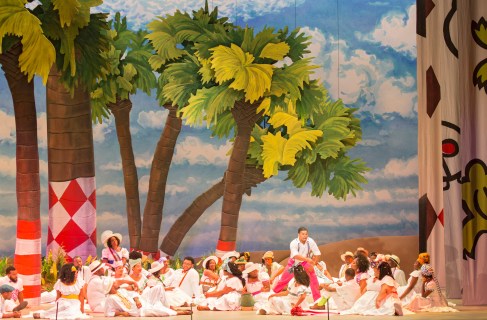 What still comes through in the end, vividly and freshly, is that Bess needs Porgy at least as much as he needs her. This impression is actually enhanced by the colorful portraits that we see of Crown and Sportin’ Life. Bringing chaos and bloodshed to a dice game or singing “A Red Headed Woman,” Greene is far more dangerous as Crown than ribald or desirable. Bess’s other stalker doesn’t amount to much, either. Tempting Bess with his happy dust, Robertson is the sly city slickster version of Sportin’ Life, cracking wise rather than satirically in his signature “It Ain’t Necessarily So,” where I grieved for the missing Methuselah stanza.

Designing costumes for Serena and Jake, Green brings out their special characteristics, Serena’s upright dignity and Jake’s wholesome determination. Thomas pours out Serena’s grief in “My Man’s Gone Now,” and Outlaw struts Jake’s infectious energy in “It Takes a Long Pull.” The Johnson C. Smith University Choir, decked out in a wonderful array of colors and styles, makes a bustling community out of Catfish Row and reminds us of the beauties that Gershwin packed into the ensembles.

The cherry on top of it all is the luxuriant presentation of the street vendors’ cries: Shanta L. Johnson as the Strawberry Woman, Tamar Green as the Crabman, and Walter J. Jackson as Peter the Honeyman. All in all, squalor is nearly banished from this reimagined Catfish Row. What remains is truly honey in the comb.

If you’re going to serve up something as popular and inviting as Porgy and Bess as the centerpiece of your festival, it makes sense to keep people around town with a companion theatre piece that is equally welcoming. So they’ve not only brought in their most frequent theatrical visitors, Gate Theatre from Dublin, they have them presenting the most popular and familiar comedy they’ve ever exported to Charleston in all of their 11 appearances, Oscar Wilde’s The Importance of Being Earnest.

Now I admit that this struck me as pandering to the masses until intermission, when my wife Sue and I listened to the couple behind us desperately wrestling with the complications of Wilde’s plot as if they were rocket science. My guess is that the fog lifted after intermission, when the action moved from Algernon Moncrief’s London apartment to Jack Worthing’s country manor.

Surprise follows surprise, unexpected intrusion follows unexpected intrusion as the men’s fiancées, daffy Gwendolen Fairfax from the city and peculiarly naïve Cecily Cardew on the manor, unravel both their beaus’ double lives – with nifty misunderstandings and reversals along the way. It’s an elegantly crafted comedy machine with a steady stream of wickedly witty dialogue along the way.

My only worry, after recent Gate efforts at the Dock Street Theatre, was whether the Dubliners would bring enough energy – and decibels – to their task to bring out Wilde’s brilliance. Underpowered Alex Felton as Algy and Aoibhin Garrihy as Gwen in Act 1 didn’t exactly soothe my fears. But when Michael Ford-Fitzgerald as Ernest/Jack came wooing Gwen, there was comfort, and when Deidre Donnelly sailed in as Lady Bracknell to forbid the union, there was hilarity.

As it turns out after intermission, in Acts 2 and 3, it’s Wilde’s energy that kindles the Dubliners’ energies as all four lovebirds are increasingly surprised and distressed. Thwarted in the city, Ford-FitzGerald becomes more animated, physical, and funny as Uncle Jack when Algy suddenly appears, pretending to be Jack’s fictional brother Ernest – whom Jack fictionally killed off just moments earlier. Algy has been drawn into the country by the prospect of meeting Jack’s ward, Cecily Cardew, and falls for her at first sight. 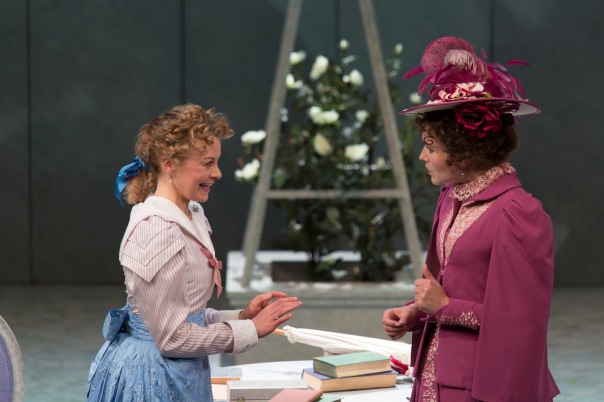 Not to be outdone, Cecily has already fallen in love with her fictional uncle Ernest, with fanciful diary entries and love notes from the rascal vouching for their burning romance. Making all of this up out of whole cloth doesn’t faze Cecily at all, and Lorna Quinn blesses her with the most insouciant caprice. Most of all, she’s enchanted by Ernest’s name. If you didn’t know, there’s a lot of that going around.

All of this nonsensical fantasy, compounded by Jack’s opposition and Algy’s raging hormones, help to boost Felton’s energies to the point where we can hear him. Similarly, when Gwen discovers – or misunderstands – that both she and Cecily are engaged to Ernest, there’s enough spontaneous indignation for Garrihy to parlay into audibility. When Lady Bracknell suddenly appears, implacably pursuing her disobedient ward, we get a seemingly insoluble stalemate of guardians’ matrimonial prohibitions.

This is where director Patrick Mason’s concept shines brightest, for he and Ford-FitzGerald whip Jack up to a frenzy of desperation that I’d never suspected lurked in this script – while Donnelly as Lady Bracknell retains her signature sangfroid. They all somehow become one big magically dysfunctional family at the end, and we couldn’t be happier for them. Even if you’ve seen this classic over and over, this Earnest is worth seeing again.