There’s plenty to celebrate this year at Spoleto Festival USA. The annual Charleston event, a busy and eclectic mix of the performing arts, marks its 40th season this year – along with the reopening of its grandest venue, the Gaillard Center, a sleeping giant since renovations began in 2012. It would be hard to imagine a more fitting way to celebrate the longevity of Spoleto, the city of Charleston, and the rebirth of the Gaillard than this year’s signature event.

Featuring the visual designs of Charleston-based artist Jonathan Green – and the voices of our Johnson C. Smith University Choir – the all-new production of the Gershwin Brothers’ Porgy and Bess will anchor the 17-day festival as no event before. Starring baritone Lester Lynch as Porgy and soprano Alyson Cambridge as Bess, the opera, clocking in at three hours and 15 minutes, will inaugurate the new Gaillard on opening night of Spoleto 2016 on May 27, and it will be among the final events on June 12.

The second performance of Porgy on May 30 will nearly upstage the first, for it will be simulcast on a jumbotron screen at Marion Square in the heart of town – and rebroadcast the following evening at the West Ashley High School practice field. Both events will be free to the public.

Porgy and Bess not only unfolds in Charleston, it is adapted from a novel, Porgy, by Charlestonian DuBose Heyward, who was inspired by people he knew and heard about. George Gershwin came down to Charleston to get a feel for the place, and the songs he wrote with his brother Ira and Heyward have lived on in many classic recordings. In jazz alone, you’ll find treasured versions of “Summertime” and other of the opera’s folksy arias by Billie Holiday, Sidney Bechet, John Coltrane, Oscar Peterson, and Joe Henderson. Standing tallest among the P&B tributes are the album-length Miles Davis set, with orchestrations by Gil Evans, and the famed Louis Armstrong-Ella Fitzgerald traversal of the score.

Maybe that’s the reason this year’s jazz roster is so mainstream and American this season compared with the international lineups of recent years. Of course, when we talk about Porgy and jazz, we’re not talking whitebread American. There will be ethnicity galore, with a couple of the chief headliners getting to break in the Gaillard Center as a jazz venue. The first jazz artist at the Gaillard will be René Marie (May 29), making her fourth appearance at Spoleto, this time backed by trumpeter Etienne Charles and trombonist Wycliffe Gordon, heavyweights in their own right. Later next week, a jazz legend marks the 25th anniversary of his Spoleto debut as the Randy Weston African Rhythms Sextet (June 2) takes over the big stage.

There’s nothing shabby at all about the Cistern Yard venue on the College of Charleston campus. Still, you might catch a slight aroma of decadence as the moonlight filters through the live oaks and Spanish moss, while an ancient stone-faced clock, eerily spotlit, presides over the outdoor evening concerts. Multi-Grammy Award winning pianist Arturo O’Farrell and the Afro Latin Jazz Orchestra (May 28-29) is the first big jazz name to lead a moonlight revel. Two jazz nobles split the next weekend at Cistern Yard. Cécile McLorin Salvant (June 3), winner of many recent critics’ accolades and polls, makes her second Spoleto appearance, and – in outré disguise – MacArthur Genius Fellowship winner Jason Moran (June 4) makes his Spoleto debut.

Moran will lead a Fats Waller Dance Party wearing a papier-mâché mask of Waller’s head – and hat. It will be fascinating to find out what that’s about.

The smallest jazz venue, College of Charleston’s Simons Center, isn’t as clubby as the Woolfe Street Playhouse recently adopted for the contemporary Music in Time (June 1-2) series when it veers toward latenight. But it’s a sonic gem – with general seating. So you’ll want to be the early bird, especially when The Freddy Cole Quartet (June 8-11) comes calling for eight performances. Word has long since gotten out that his singing sound is very much like his elder brother’s, Nat King Cole, and with Randy Napoleon backing him on guitar, there’s a kinship in his combo’s sound as well.

Fewer people know about the Bohemian Trio (May 28, 30-31), who make their six-performance stand at Simons a week earlier. Having rated saxophonist Yosvany Terry’s most recent New Throned King album among the top 40 for 2014, I’ll vouch for him. With a piano and a cello rounding out the trio, don’t be surprised to hear some classical sounds mixing into the Afro-Cuban flavors.

On the Theatre front, Dublin’s Gate Theatre will be making their 11th appearance at the festival with Oscar Wilde’s The Importance of Being Earnest (May 27-June 12). So what could possibly go wrong at the beautifully renovated Dock Street Theatre? Nothing at all IF THEY SPEAK LOUDLY ENOUGH!! I’ll be heading back to Charlotte too soon to see Every Brilliant Thing (June 8-11), but having caught Jonny Donohoe’s one-man show off-Broadway early last year, I can recommend it – and the Woolfe is a perfect place to stage it.

I’ll be opting for another theatre solo during Spoleto’s final week with Gary McNair’s A Gambler’s Guide to Dying (June 7-11) at College of Charleston’s Robinson Hall. After winning a fortune on a 1966 World Cup bet, the Scotsman’s grandpa bets it all on living to the year 2000 – with a diagnosis of cancer hanging over his head. Please don’t tell me how this turns out! My own bet for a surefire hit comes from Suzanne Andrade’s 1927 company, making their third appearance at Spoleto. Mixing film, animation, Claymation, and mind-blowing set and costume design with live performance, Golem (June 8-12) promises to transform eerie Jewish folklore into a contemporary technological dystopia. Hopefully, Andrade & Co. can conquer the off-putting vibe of Sottile Theatre. 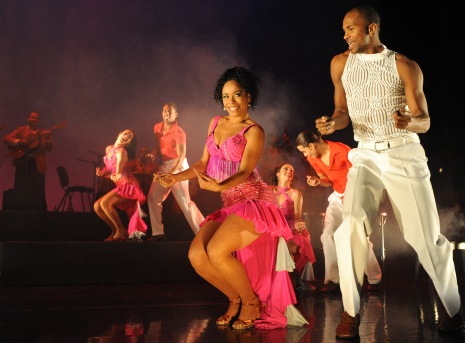 Dance is the most consistently fabulous element at Spoleto, so you also want to earmark anything you can wangle a ticket to in the same can’t-miss category as Golem. Appearing at the Gaillard during the last two weekends of the festival, L.A. Dance Project (June 4-5) and Havana Rakatan (June 9-11) are both self-recommending – especially if you realize that Havana Rakatan is shepherded to Charleston by Sadler’s Wells, the same London powerhouse that brought the fiercely exciting Breakin’ Convention to Charlotte last year.

Break dancing does get its moment at Spoleto when choreographer Amy O’Neal brings five world-class B-Boys to Charleston’s most versatile midsized space, Memminger Auditorium, for Opposing Forces (June 8-12) – with an original score by WD4D. Aakash Odedra Company (June 1-5) brings the acclaimed soloist to Robinson Hall, but that’s only after the Bill T. Jones/Arnie Zane Dance Company (May 27-29) brings their some choice cuts from acclaimed repertoire to the Sottile, plus live musicians to help bridge the moat between the stage and the audience. They’re also bringing a setting to my favorite piece of chamber music, Mendelssohn’s mighty Octet for Strings, an exciting prospect.

Of course, there are also two operas, 11 lunchtime chamber music programs, two choral explosions, a recently exhumed cabaret revue that relates to Porgy, three orchestral concerts – including a 40th Anniversary Celebration Concert (May 28) – and the category-defying Manual Cinema (May 27-30) that I haven’t described. Head to the helpful Spoleto website for the complete festival schedule of all 150+ performances and info about all 45 of the shows.

Those of you who might be dragged away from Charlotte’s NASCAR bacchanalia might be consoled by the two bluegrass performances by Old Crow Medicine Show (May 26-27) at Gaillard Center, and if you’re gnashing your teeth over missing Brandi Carlile (May 30) here in Charlotte, she and her Americana pops up at Cistern Yard on Memorial Day. Lovers of Sam Cooke and Otis Redding soulfulness will be tempted by the Festival Finale (June 12) at the lovely Middleton Place plantation. Nathaniel Rateliff & the Night Sweats headline the musicmaking that begins in the afternoon, continues into the evening, and climaxes with a post-concert fireworks display.