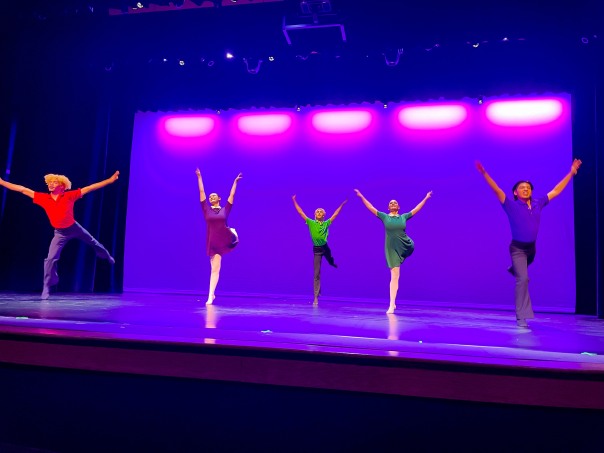 December 2, 2022, Charlotte, NC – Compared with Charlotte Youth Ballet’s annual production of Tchaikovsky’s beloved Nutcracker, Central Piedmont Dance Theatre’s fall presentation, Sunlight and Solstice, drew only a small fraction of the huge crowd that converged on the CP Community College campus for the second weekend of the 2022 holiday season. Yet the few of us who chose the less-ballyhooed event were rewarded with more new things to see, for Sunlight and Solstice delivered plenty of new choreography in its bouquet of seven dance pieces, and the program was staged at The New Theatre – in the spanking new Parr Center complex. Dance faculty members Clay Daniel and Tracie Chan each created three pieces for the auspicious event, working with their students to synchronize and refine their performances. 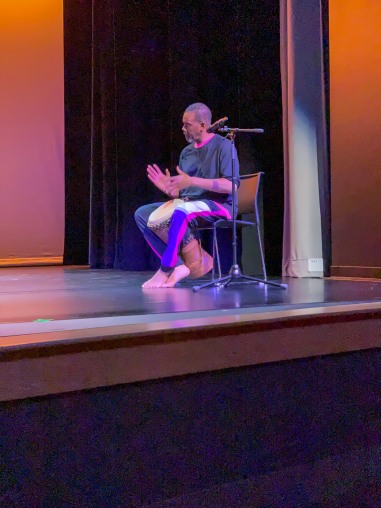 The program closed with a guest appearance from the Chris Thompson Cultural Ensemble, with live singing and drumming by their leader.

Sadly, the newness of the venue was underscored by the fewness of the audience. That increased my admiration for Daniel, who maintained his poise and geniality in handling his hosting chores. Without a printed program in our hands, you could say that Daniel’s intros were godsends, and as our host candidly disclosed, they also spread a convenient veil over the time needed backstage for costume changes between dances. Daniel was no less savvy in choosing his own 2014 settings for Shel Silverstein’s A Light in the Attic to start us off, for they provided a satisfying variety of little nuggets from the 1985 recording while introducing us to a wide swath of CP’s dance corps. Among the ten different vignettes, a couple as brief as 18 or 19 seconds, my favorites were “Bear in There,” “Homework Machine,” and “Monsters I’ve Met,” but all of these were decisively upstaged by “Eight Balloons,” which featured a helium balloon (an unbeatable prop) and an engaging array of dancers and movement.

My first audition of the New Theatre’s sound system was a letdown after the brilliant impression made by the hall, the seats, and the sightlines. Silverstein’s poems should have been louder and clearer. Even more ominously, the backup music promised by Daniel was rarely audible. Replay at home on Spotify was necessary for me to confirm it was actually there.

Nor was there instant redemption or revelation when the soundbooth cued up Camille Saint-Saëns’ Danse macabre for “Cadence,” the first of two Chan pieces that followed. Impact of the music was tepid rather than electrifying. The men who launched the dance were freer to move around than the more balletic women who came afterward, so the best of the work’s three segments was the last, when both groups joined together and movements emphasized leaps more than en pointe work. “Hannah” was an even more delightful piece, though I refuse to believe that Chan chose the best recording of “Hard-Hearted Hannah” she could find. On the other hand, Chan did choose Aubrey Conrad, her best and most alluring dancer, to portray the Vamp of Savannah, GA. Costumer Emily McCurdy dressed her in a tight, eye-popping red outfit to make sure we noticed. Backups (aged 17-69 as Daniel pointed out) were in slacks, their black tops besprinkled with coppery spangles.

A couple of interestingly varied Daniel pieces ensued, with music by JS Bach and Mark O’Connor. Their titles, Art of the Fugue and Appalachian Waltz, were sufficient to distinguish who composed what. Once again, Daniel’s programming was on-the-money, following the splashy éclat of “Hannah” with a piece for three men – Carson Fullwood, Dawsyn Ransome, and Nicolas Hare – more quietly titled “Prelude.” This agreeable trio also provided Conrad with extra time for a breather as well as the costume change she needed to reappear as the soloist in “Moonlit,” the dreamiest piece of the night. 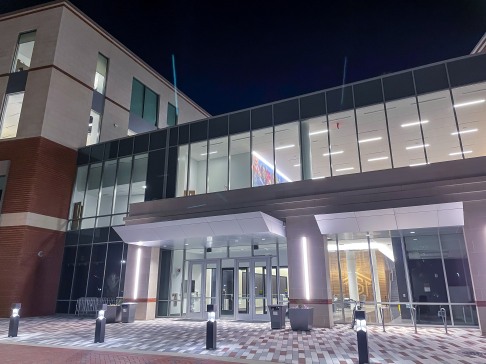 The perkiest piece of the night was undoubtedly Chan’s “Winter’s Frolic,” set to three choice cuts by the Vince Guaraldi Trio. Or maybe two choice cuts would be more accurate, since the choreographer’s musical taste could be questioned once again when she chose Guaraldi’s take on Beethoven’s “Für Elise” as the middle piece in her three-piece suite – not wintry, not frolicsome, and not typically Guaraldi, with no redeeming Christmas or Halloween spirit. The icy skating motif established by the dancers in “Skating” was stopped cold, thankfully returning with Chan’s finale. Somehow, Conrad managed another costume change to slip in among the six dancers, but it was Rieonna Weldon and Carson Fullwood who were featured. 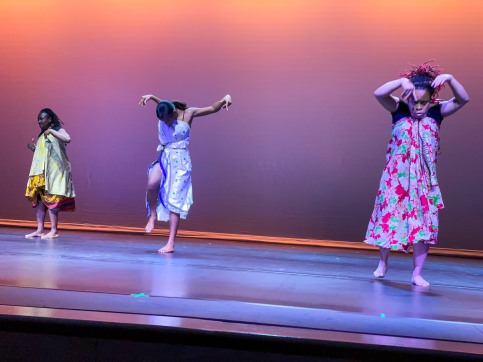 Whether it was the African style of clothing Chris Thompson’s dancers wore or the lighting shift behind them from the rich violet of “Winter’s Frolic” to a peachy sunset hue, “Rivers of Babylon” brought on the most sunshine of the evening and reminded us that there are two solstices. With Thomson beating out rhythm on his drum, we could readily feel transported from winter to summer as his three dancers – Micheline Ruffin, Erika Guzman, and Briana Hubbard – moved gracefully onto the brightly-lit stage. Then it all came together as Thompson sang the reggae song: summer meshed with winter, one solstice followed another, and the words of an Old Testament song were sung in the season of the New Testament’s most joyous holiday.