Review: To Kill a Mockingbird at Blumenthal PAC 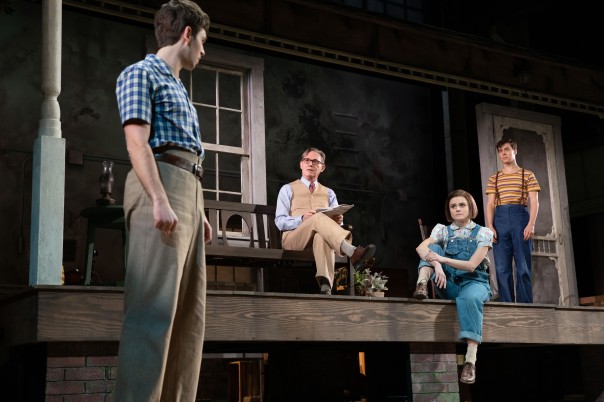 In light of what I truly experienced at Belk Theater on opening night of Aaron Sorkin’s To Kill a Mockingbird, watching Atticus Finch valiantly defend Tom Robinson for at least the eighth time onstage, it’s simply inadequate for me to say that Richard Thomas was stunning as the iconic Alabama defense attorney. Staggering is more like it, easily the most powerful work I’ve seen from Thomas in my 59+ years of watching his most memorable performances live on Broadway, in Charlotte, and on TV.

Much of the credit should go to director Bartlett Sher and his design team for prodding Thomas toward reimagining Atticus so radically. The unexpectedly drab and humble scenery by Miriam Buether is particularly effective, draining nearly all of the Southern charm and elegance from Harper Lee’s Maycomb County – and doing it on a spectacularly large scale. 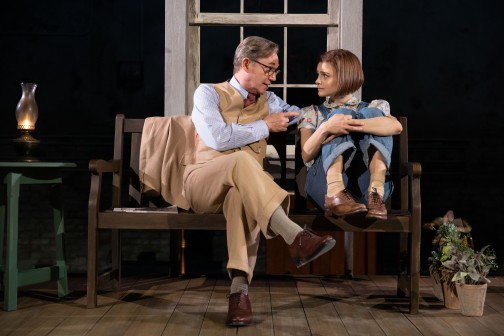 Yet it’s Sorkin who really lights the fires, scandalizing the stodgy protectors of Lee’s legacy with the first Mockingbird adaptation to reach Broadway. Now he’s doubling and tripling down with subsequent revisions that enable his West Wing political points to hit home more and more sharply. The Broadway script took on Bob Ewell, the low-life Klansman who beat and raped his daughter Mayella before accusing Robinson of the crimes, and added to his foulness by layering on a couples of doses of antisemitism as he berates Atticus. Mayella spews far more venom than we remember after Atticus gives her a harder time, and prosecutor Horace Gilmer goes after Robinson with a new viciousness, all the more shocking in the finely tailored suit that costumer Ann Roth dresses him in. 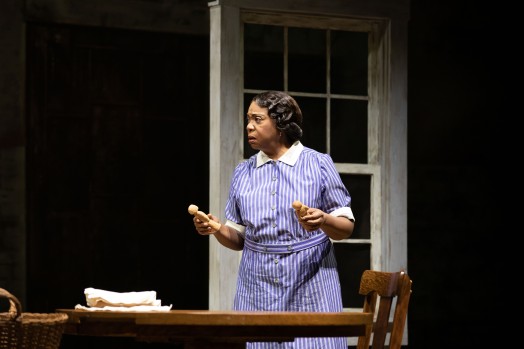 Like me, audiences are so used to seeing this story of grim understanding and growth through the eyes of a little girl, Finch’s tomboy daughter Scout. They will likely be shocked to discover that Sorkin is far more interested in the lessons Atticus learns – and the lessons we still haven’t learned as a society. In the wake of 2020 and the bitter fruit of #BlackLivesMatter, Sorkin’s Mockingbird 2.0 offered some fortified pushback from the Finches’ housemaid Calpurnia, scolding Atticus for his oft-expressed bromides that we should respect everyone since everyone has some good inside of them.

So the post-pandemic script returned to Broadway with some new wallop, but I won’t divulge how the formidable Jacqueline Williams as Calpurnia silences Atticus with a single sentence. Not yet. Both Sher and Thomas do know how to wield a silence, that’s for sure. We’ve waited our entire lives to see the Atticuses of our Dear Old Southland told off like this.

Maybe Sorkin should have left well alone after delivering this fresh blow. But he started delivering haymakers on Broadway in 1989 with A Few Good Men, a good ten years before establishing his more colossal bully pulpit with The West Wing. So restraint and soft-spokenness are way back in his rearview mirror.

Very likely, Sorkin and Sher have continued to tune up their production, maybe even after it started touring in March. For Mockingbird 2.1 or 3.0, whatever you choose to call it, now has a political dimension that savvy Broadway reviewers could never have overlooked. 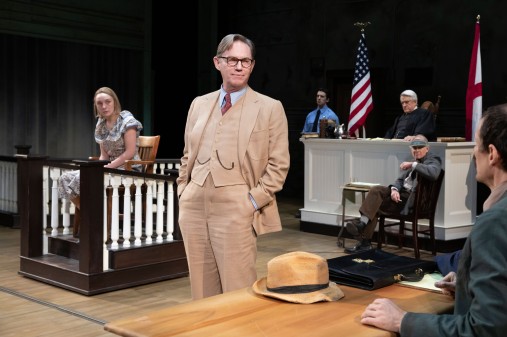 Most probably as a nod to Rep. Liz Cheney – if not to Republican Trump flouters who preceded her – Sorkin now lets it drop in his narrative (split up here between Scout, older brother Jem, and their chum Dill) that Atticus holds an elective office at the state level, so popular and entrenched that he usually runs unopposed for re-election. Ah, so in addition to getting told off, we will also learn that Atticus suffers political consequences for all his integrity, linking him to Cheney’s apparent martyrdom-in-progress.

Receding into the background, as Mockingbird becomes Atticus’s story more than Scout’s, is all the midnight cooing over the mystery of Boo Radley that cluttered the beginning of our narrative. Now Scout and Jem and Dill all obsess over how Bob Ewell could have possibly fallen on his knife, flipping the narrative almost entirely upside-down, since even Tom’s rape trial is a series of flashbacks.

All of this will be easy enough for first-timers to follow, with far more dramatic intensity for those of us used to the clunky old Christopher Sergel adaptation. On the other hand, Sorkin has jettisoned a few key moments that both the Oscar-winning 1962 movie, starring Gregory Peck, and the theatrical version – staged every May at the courthouse of Monroeville, Lee’s hometown – have effectively memorialized and graven in our minds. 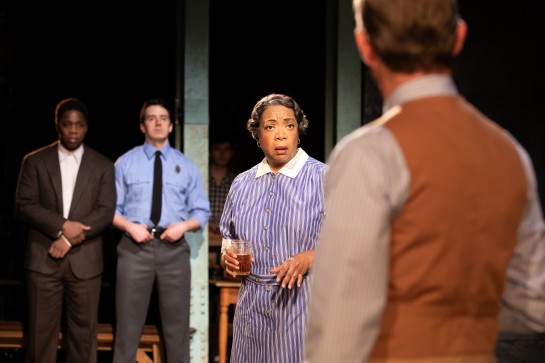 Sheriff Tate won’t be scampering onto the Finches’ front porch begging Atticus to put down a rabid dog that is terrorizing the town, a calm display of marksmanship that will amaze Scout and Jem, both of whom view their dad as effete and ineffectual. Sorkin also dispenses with the dignified episode where Atticus slowly, with exquisite self-control, extracts a handkerchief from his pocket and mops his face after Ewell has rudely spit in it. Instead, Atticus demonstrates his manhood by executing a neat jujitsu move on Ewell when the abusive boor confronts him after being publicly humiliated at the trial.

Nor will Atticus get the customary reverential treatment from the black folk when he makes his final exit from the courtroom, a further diminution of the icon – and perhaps the oddest of Sorkin’s juxtapositions of how we see Atticus today and how he would have been seen in 1934 Alabama. Goodbye, Rev. Sykes, your services aren’t needed in this version. Equally strange, yet far more delightful, Tom Robinson’s defense witness and former employer, Link Deas, is now played by deaf Canadian actor Anthony Natale, infusing the character with a totally fresh back story. Link now speaks ASL when he takes the witness stand, mostly translated for us by the children. It’s not the last of the personal secrets he will share with them exclusively.

The universally acknowledged town drunk injects some welcome comedy into this Deep South segregation tragedy, giving it more contour. Yet we find it hard to forget the phenomenon of Atticus Finch going off on Mayella Ewell, the overworked big sister that even Tom Robinson has the audacity to feel sorry for. The kid gloves are also tossed aside – along with his prepared written remarks – when Atticus rises to give his closing remarks. 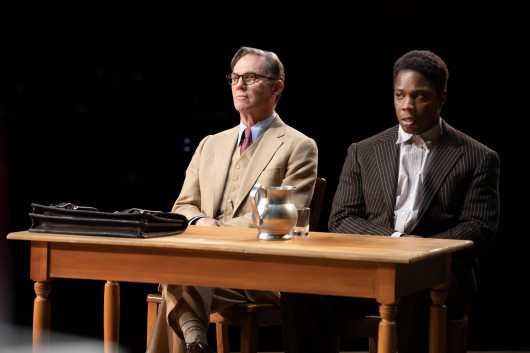 You could see how inspired Thomas was by the words Sorkin gave him, first berating himself for not schooling Robinson effectively enough to prevent his voicing pity for a white person, then heaping scorn on the city, the society, the nation and himself for insisting on such toxic racist niceties. But Thomas looked out on us more often on opening night than on the jury box as he mixed self-flagellation with earnest pleas and white-hot anger in his volcanic eruption, making it possible that he was also drawing inspiration from a Belk Theater crowd that filled the highest row in the highest balcony, hanging on every word, a rarity for a non-musical production.

The usual rituals and ceremonies relied upon in presenting Mockingbird had been shunted aside for new ones. With thundering success.

Thanks to the Blumenthal Performing Arts sound crew, all that thunder sounded quite natural and human. While Thomas can’t be accused of holding back when called upon to lose control, he is poise and grace as Atticus aside from his three notable eruptions. His antagonists, Joey Collins and Arianna Gayle Stuky as the Ewells and Luke Smith as prosecutor Gilmer, are no less fired up. It’s as if Sher told them that Mockingbird had been accused of being a children’s book – and to take that as a personal insult.

Here on the road and back on Broadway, Sher has consistently opted to use adult actors to portray the kids in this story. After about five seconds of uneasiness as Melanie Moore seemed to struggle with Scout’s Southern drawl, my discomfort disappeared. Kids would have worked as well or better than Justin Mark as Jem, Steven Lee Johnson as Dill, and Moore tagging along as Scout if their main charge was to sneak out at night and snoop on Boo or playact the painting scene from Tom Sawyer. But Sorkin mainly has them haunting the trial as our narrators, where less gee-whiz wonder and more spontaneous energy is better.

If Williams enjoys the enviable luxury of acting like she’s been imported intact to this story from a fully woke 2022, Yaegel T. Welch must finely calibrate his Jim Crow subjugation as Tom Robinson. Despite all the attitudes and traits Welch may have told Sher he would not do – or all the stereotypes Sher may have tried to avoid – this Robinson seems to have just the right amounts of fear, courage, and resoluteness that fit how his fate plays out. The new ingredients that Sorkin and Sher give him, from the moment Atticus first visits him in jail, is a healthy realistic cynicism.

Can a court-appointed attorney really help him? Can there be any other verdict than guilty for a black man in Alabama accused of raping a white woman? Both Welch and Williams in their roles seem to know the world better than Thomas does in his. These are two persistent tugs against Atticus’s education and elitism, insidiously allied with Tom Ewell. Neither of them acts as if this were a tender bedtime story. Whether you’re Tom standing trial or Calpurnia, making sure the children see it, this is all dead serious.

With the shifting emphases of Sorkin’s adaptation, Travis Johns gets to be as effective as Mr. Cunningham, the impoverished KKK father of one Scout’s classmates, as he is later in the more crucial role of Boo Radley. While Sorkin lets us know that each member of the Maycomb jury has blood on his hands, he allows Richard Poe as Judge Taylor and David Christopher Wells as Sheriff Tate to escape the kind of scrutiny he aims at Atticus. They are the most solid links between this Mockingbird and those that have come before, though I’d say both men are warmer and more prominent as the town’s good citizens.

After all, with all the other hooded white folk and the dozen unseen jurors filling out Maycomb’s voting rolls, who’s left in Maycomb to say something good about? Just Tom, Calpurnia, Atticus, the kids, and the upright black folk who attend the trial and bear witness. 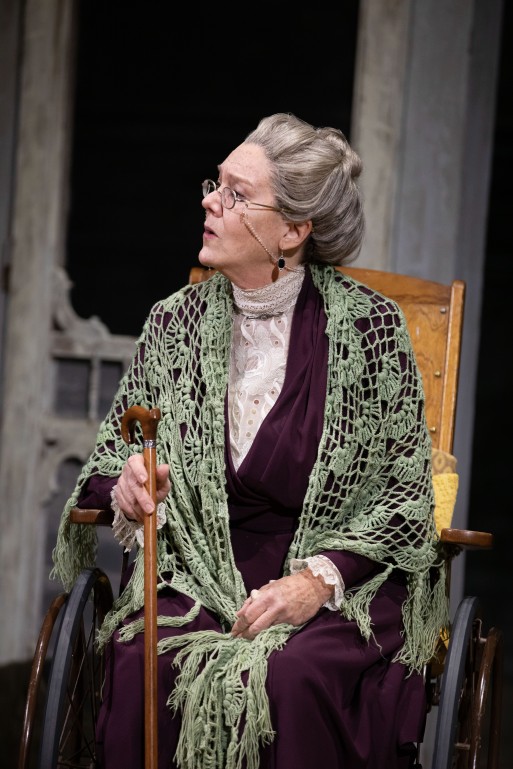 No, Sorkin does not forget about the Finches’ haughty neighbor, Mrs. Henry Lafayette Dubose, and her precious camellia bushes. The racist’s belligerence is elevated to Broadway dimensions, justifying Jem’s attack on her garden more than ever. Played on tour by Mary Badham, a new link is forged with the 1962 film, for the Birmingham native made her auspicious screen debut as Scout. When she was nominated for Best Supporting Actress, she became the youngest nominee who had ever received such Oscar recognition.

Nor is Dubose a token throwaway role. Badham plays her with iron rectitude and fiery malice, clearly as bad an influence on the kids she berates as Atticus is good – and she berates Atticus with gusto as well, which proves fatal to those precious camellias. This altercation, not devoid of comedy, tumbles around enough to become a fairly central teaching moment. Sorkin flips it beautifully, for now when Atticus makes Jem make restitution for his misdeed – and apologize – he not only gets pushback from his son.

Later on, Calpurnia forgets her place a little and goes off on him. By bending over backwards that far to show Mrs. Dubose respect, Calpurnia says flatly, Atticus is disrespecting her – and all other people that nasty racist is hurling hatred at.

Thomas sits there downstage, doesn’t answer, gets the point. We all do.