March 17, 2022, Charlotte, NC – Aside from the mix of masked and unmasked concertgoers, the revocation of social distancing, ushers who skipped over asking for my proof of vaccination, and the absence of masked musicians onstage, the most gladdening indication that nightlife in Charlotte is returning to normal may be the three-day Women in Jazz residency at the Stage Door Theater. The JazzArts Charlotte celebration of Women’s History Month, paused by the global pandemic in March 2020, emphatically hit the play button – with a completely new guest lineup – to the delight of a nearly full house. Memories of the isolation, quarantines, and lockdowns imposed upon us by COVID weren’t totally erased, since one of the musicians, Francesca Remigi, was a last-minute replacement for the originally scheduled drummer, Allison Miller, absent due to illness. 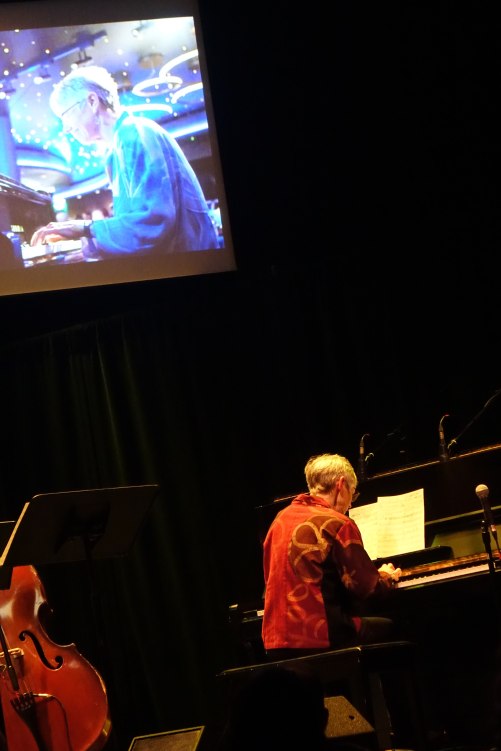 My wife Sue and I were nearly absent as well, due to St. Patrick’s Day traffic and a 21-minute delay on I-77 induced by a crash, but radio personality Curtis Davenport, emceeing with his usual verve, had enough to say to prevent us from missing any of the music. Leading the female quartet, pianist Ellen Rowe had plenty to say in her own right, and persistently solicited questions from the audience, dispensing with the all-too prevalent assumption that people at a jazz concert must all be aficionados. Rowe was wonderfully in tune with the idea of a residency, not merely providing the title of every song but also some info about it. No hipster “of course that was…” codas after any of the tunes, a refreshing change.

This approach jibed with the discreetly educational vibe of the Jazz Room series and with the JazzArts mission. While the ambiance at the Stage Door is very much like a jazz club when JazzArts invades, the walls sport poster-sized photos of jazz greats like Charlie Parker and Duke Ellington, and a big screen monitor suspended behind the bandstand presents a slideshow of other jazz greats – not so quickly that it becomes distracting. At Women in Jazz, hardly a man was onscreen, the slides presenting a potpourri of influential woman, from pianist Mary Lou Williams and trombonist Melba Liston, way back when, to today’s Artemis supergroup. 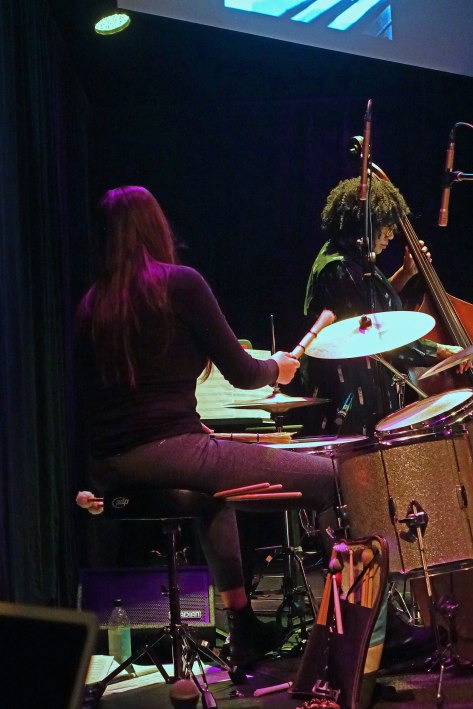 Downstage on the bandstand, saxophonist Sharel Cassity was a dominant presence, playing both alto and soprano. Yet she tilted toward alto, especially in the heritage and tribute pieces, bending toward the higher instrument when she played on Rowe’s originals. Upstage, bassist Marion Hayden didn’t simply make the trip to recede demurely into the background, as we could have assumed when all three bandmates drew solo space on the opening “Kenny’s Quest,” a bopping tribute to contemporary altoist Kenny Garrett. The be-bop continued on “All the Things You Are,” Rowe supplying its Charlie Parker-Dizzy Gillespie context while explaining how she inverted Gillespie’s famed preamble in her arrangement. Here Hayden not only set the tone with the inverted intro, she actively lurked after Cassity launched the familiar Jerome Kern melody and, following the full three-chorus solos from Rowe and Cassity, added three eloquent choruses of her own, firmly establishing that she would be part of the evening’s conversation. 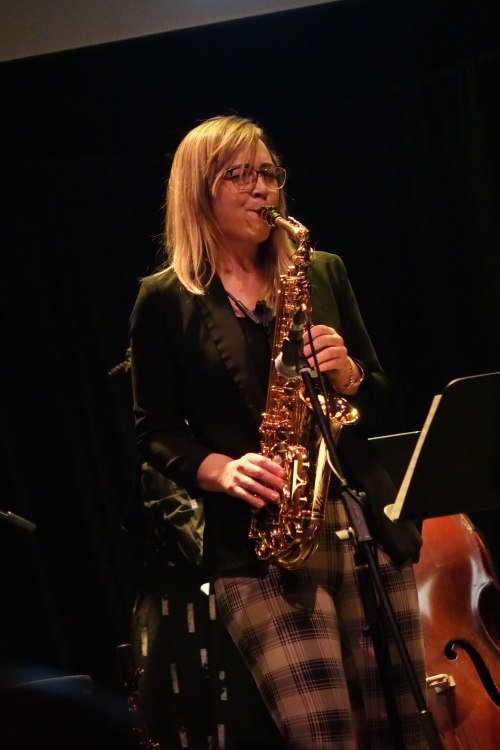 Hayden was part of the framework on the bop staple that followed as well, spelling Cassity at the bridge in introducing the melody and reprising that role in the out-chorus. By this time, it was apparent how brilliantly Cassity could burn on alto, drawing a few delighted exclamations from the crowd. So we were curious to learn what kind of flame she could ignite when she picked up her soprano sax. Unfortunately, the first two originals that she played on that instrument, Rowe’s “Sylvan Way” and “Defractions,” didn’t require her to turn up the tempo or the heat, and on Rowe’s “Phoenix” – proving, according to the composer, that she could write a happy tune – Cassity didn’t get enough blowing time to achieve lift-off. But her tone and lyricism on soprano were gorgeous, true to Rowe’s prevailing New Age flavor, sounding more comfortable when confined to the melody than she was on alto.

Rowe’s style was rather chameleonic when she played. On “Kenny’s Quest” and Carole King’s “I Feel the Earth Move,” her shuttling between light-fingered and heavily percussive passages hinted at a wisp of McCoy Tyner influence. After the latter gem, she hoped that at least the bandstand moved. When we reached Oscar Pettiford’s “Blues in the Closet,” where everyone excelled, including Remigi at her drumkit, Rowe seemed to be channeling a slew of ‘50s keyboard greats, Bud Powell or John Lewis when she frolicked with her right hand in the treble, Red Garland or Erroll Garner when she switched to two-fisted block chords. I was afraid that Cassity’s performance of the melody would go without the wonderful harmony Pettiford wrote for it, so I found myself singing it at one point. But Rowe came to the rescue, and thankfully, I could shut up.