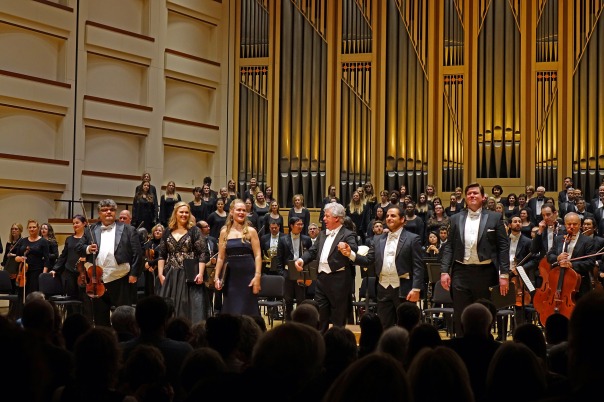 Beethoven’s original intent, when he conceived his Missa Solemnis, was to honor one of his foremost patrons, Rudolf, the Archduke of Austria, who was to be installed as an archbishop on March 9, 1820, in what is now the Czech Republic. Unfortunately, Beethoven missed his self-imposed deadline, so we are not on the brink of celebrating the bicentennial of one of this composer’s most towering achievements. The score wasn’t placed in Archbishop Rudolf’s hands until the third anniversary of his installation, wasn’t premiered until the spring of 1824 in St. Petersburg, and Beethoven never saw (by this time, he was deaf) a complete performance during his lifetime. Only the Kyrie, Credo, and Agnus Dei were offered when Beethoven presided over the only performance of the Missa Solemnis that he ever attended on May 7, 1824. Yet it cannot be said that the Vienna audience was shortchanged, for on the same night, Beethoven’s immortal “Choral” Symphony had its world premiere.

There is certainly a kinship between the two works, which call upon the Charlotte Symphony Orchestra to bring a chorus and four special guest vocalists to the stage each time they are presented. Last conducted at the Belk Theater by maestro Christopher Warren-Green at the season finale for 2011-12, Missa Solemnis has a power and visceral impact that rivals Beethoven’s mighty Ninth, but it is nowhere near the same magnitude as a box office attraction. Symphony has wisely pushed the chorale to an earlier spot in this season’s calendar and, compared with recent Beethoven programs when Emperor Concerto and Symphony No. 8 were given three times each, limited performances to two. Most concertgoers who were there on opening night would enthusiastically confirm that this singular mass was well worth hearing.

Warren-Green’s guest vocalists and the orchestra seemed slightly tentative – and the timpanist slightly timid – in setting up the opening Kyrie, and the ethereal music that Beethoven wrote for organ was conspicuously AWOL during Gloria and the penultimate Sanctus. But the confidence of the singers and musicians firmed up quickly enough for the hesitant opening moments to be forgotten by evening’s end – while the excellence of the guest vocalists remained a constant. In the company of tenor Yeghishe Manucharyan, soprano Christina Pier, and bass Jordan Bisch, mezzo-soprano Siena Licht Miller initially sounded underpowered in the alto part. 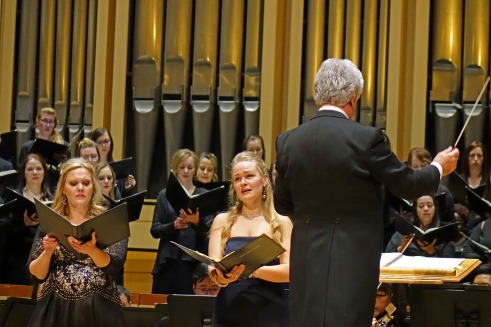 Satisfaction in hearing Miller tracked similarly to the performance as a whole. When we reached the second section, the Gloria, Warren-Green jumped up and down to spur the musicians on, tempo quickened excitedly with an awesome leap in loudness, horns and brass entered zestfully into the fray, and the chorus – especially the sopranos – sang with heightened crispness and enthusiasm. After the opening Kyrie, each of the remaining four sections was well over 15 minutes in length, epic enough to go through multiple changes in tempo and mood. Beginning with the Gloria, we heard Miller to better advantage when she was freed to explore her upper range. 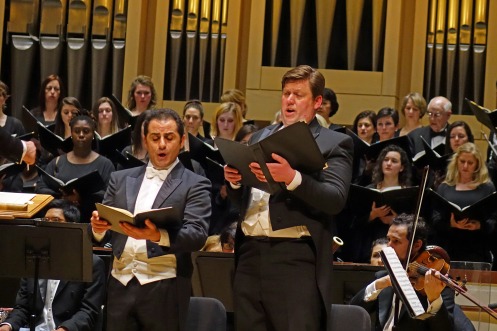 Manucharyan and Piers were more consistently strong, powerful enough to assert themselves distinctively even when the Charlotte Master Chorale – known as the Oratorio Singers of Charlotte in 2012 when they previously teamed with Symphony on this work – sang robustly behind them. Displaying admirable stamina merely by remaining standing for the entire 80-minute performance, the Master Chorale were marvelous throughout. Perhaps their most thrilling work occurred in the insistent Credo section, but their hushed moments in the sacred episodes strewn across the work were equally treasurable, more than compensating for the sacramental void left by the absent organ continuo. 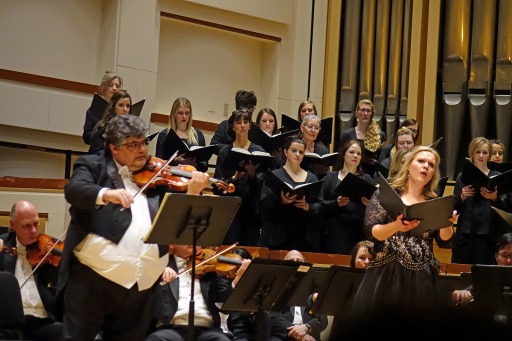 Bisch had his best moments as he opened the climactic Agnus Dei section, which was eventually crowned with military thunder and harmonious choral glory. Perhaps the most memorable moments of the entire concert were cued during the Sanctus when concertmaster Calin Ovidiu Lupanu raised his music stand, signaling that he himself would soon stand up and deliver a silvery solo before merging blissfully with the guest soloists, most especially Piers and Manucharyan, in the sublime “Benedictus” portion of this section.

The elegant Preludio played by Lupanu, almost entirely far up in the violin’s range, is said to have been Beethoven’s attempt to simulate the descent of the Holy Spirit into the midst of his solemn creation. Most of the concertgoers at Belk Theater would likely testify to the composer’s success.