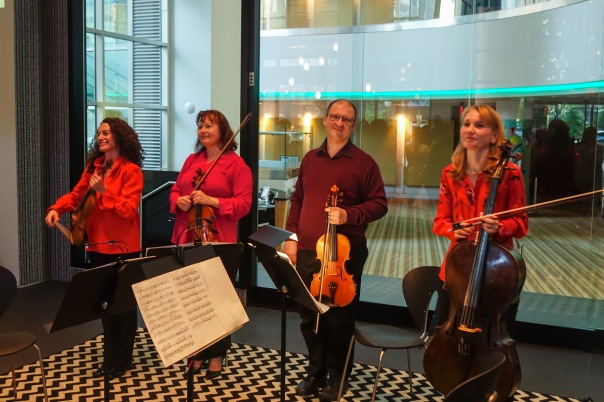 May 22, 2022, Charlotte, NC – For more than 12 years, the Bechtler Museum of Modern Art has done a wondrous job of making modern painting, sculpture, and architecture enjoyable for the Charlotte community – while infusing fresh pride and enthusiasm in the community for the modern art and artists in their midst. At the same time, the Bechtler has also diligently championed photography and cinema at special events while providing a steady stream of modern music through series like Jazz at the Bechtler and Music and Museum.

Like the Children’s Theatre of Charlotte at ImaginOn, the year-round breadth and excellence of the Bechtler Museum’s programming and exhibitions can easily be taken for granted. But a revisit to the latest Music and Museum concert, a string quartet potpourri performed by members of The Bechtler Ensemble, reminded me how seriously the Museum takes their mission and how tirelessly they retune their presentations. 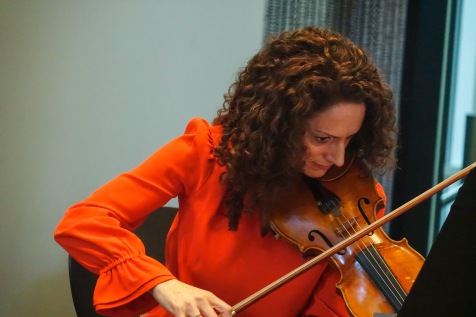 Moving downstairs to the lobby from an exhibition hall above, Music and Museum feels more relaxed, casual, and clubbier than when the series began. The sonics of the lobby hadn’t sounded much different to me when The Bechtler Ensemble played a program of Beatles compositions back in November, all newly arranged for string quartet by Mark Adam Watkins, with guitarist Bob Teixeira added to the Bechtler’s Fab Four on a couple of tunes. But seated up front for the Bechtlers’ latest “Kaleidoscope Concert,” I was astonished by the improvement as soon as Vasily Gorkovoy played the main theme of Bedřich Smetana’s Allegro vivo appassionato, the opening movement of his “From My Life” String Quartet No. 1, and first violinist Lenora Leggatt lifted it higher in the treble.

Looking back at my photos from the Beatles concert, I could see a more probable cause for the acoustic improvement than our seat location: the curtains behind the players were gone, opening our eyes to the Museum’s rear entrance, which connects it to the adjoining Knight Theater with a wall of glass – and a somewhat breathtaking view, since the strip of lighting along the rim of the Knight’s outer balcony kept changing colors, traversing all the rainbow hues of the spectrum. Bouncing off glass instead of drapery, the sounds of the string quartet were no less enhanced than the view behind them. 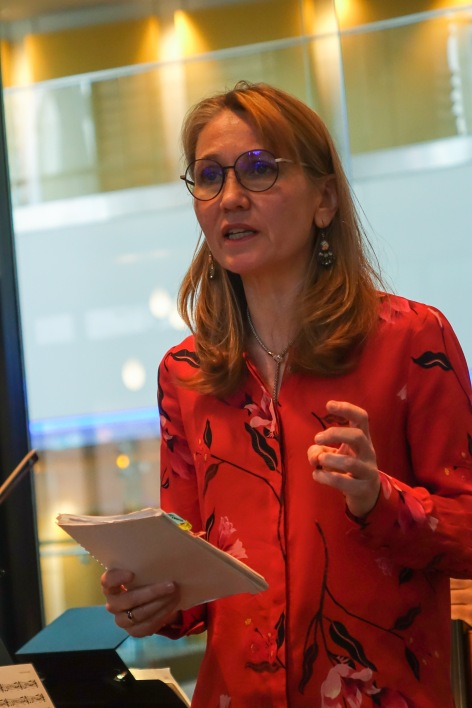 The Bechtler’s new executive director, Todd DeShields Smith, shared the emceeing with the Ensemble’s founder and director, cellist Tanja Bechtler. With Bechtler introducing the kaleidoscope of composers and music she had programmed after Smith had spoken to us about thematically connected artworks and sculpture, this format hearkened back to the original upstairs setup when the series started over a decade ago. Yet there was improvement here as well. Instead of projections while Smith spoke, three of the four artworks he discussed were in the room, flanking the musicians, including an interesting painting by Alexander Calder, which was stood up on its frame in a corner.

While the whimsical work by a Prague artist, simple drawings on canvas surrounding a cut-out of a manila envelope (so that “Express” depicted a dog walking on four human feet), belonged more solidly in the modern era, the whimsy of it all permitted the transgression of reaching back into the 19th century for the excerpts from Smetena’s 1876 quartet. Taking charge more fully on the musical intros, as she had done with the Beatles, Bechtler told us how the two movements chosen from the quartet came from Smetena’s life, the first hearkening back to his youthful beginnings as an artist and the third movement, a tender Largo, commemorating the death of his first wife. 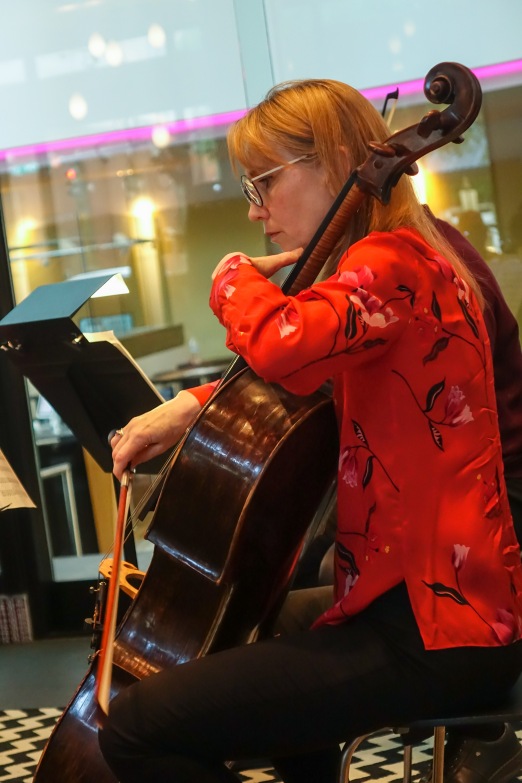 The pairing of these two movements was doubly atypical. We concluding with a slow tempo Largo sostenuto instead of a customary speed-up, and the Largo opened with Bechtler’s cello as the lead voice, once again usurping the first violin’s customary position. Legatt eventually came to the fore with a lovely cadenza after harmonizing deliciously with second violinist Tatiana Karpova. Bechtler was far from done, excelling in a cadenza of her own before taking the lead for a second time.

Smith proceeded to discuss the only projection on display, Nicolas de Staël’s Landscape, painted in 1951. Bechtler recalled so charmingly her memories of this 32×51 piece, shown in a photo hanging over the family’s mantlepiece, that I completely forgot what connection she or Smith drew between de Staël’s painting and the snip from Sergei Prokofiev’s String Quartet No. 1 that was coupled with it. Chalk that down to letting my mind drift from considering how the painting resembled a German flag and how the figures de Staël superimposed on those dominant colors made the composition look more to me like a moonscape. 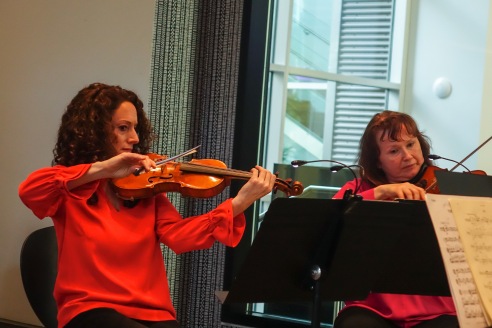 Bechtler’s intro did register with me when she spoke about how Prokofiev struggled with the commission to write his first string quartet. The outcome to me was a delightful hybrid, Legatt sounding jubilantly in the main theme like she was on a lark with Prokofiev’s Peter and the Wolf, while the accompaniment sounded very traditional, not adventurous at all. Harmonies between the two violinists were refreshingly audacious, however, and Karpova finally had a chance to show off her prowess when she took over the lead.

Philip Glass detractors could have taken special delight in Bechtler’s recollection of a strictly geometrical, monochromatic, and humdrum artwork that Smith had lavished his erudition on, somehow linking it with the composer. Bechtler admitted that she had never realized the piece was an artwork when she routinely walked by it in her childhood home, thinking it was merely something “you put stuff in.” Thankfully, the quartet, adapted from Glass’s film score for Mishima, was far more colorful and exciting. Legatt ostensibly had the lead as the “1957: Award Montage” movement busily unfolded like an industrious beehive, but Bechtler’s legato accompaniment often merited more attention as the repetitions continued, and the cellist briefly took over the lead. The swirl and solemnity of the closing were particularly affecting.

The last installment in this “Kaleidoscope” was the most explicitly colorful, a homespun Calder painting of a row of flowers and Patrick Williams’ “The Bay Is Deep Blue.” Stems of Calder’s flowers seemed to drip down the paper they were painted on, and Bechtler admitted it was a favorite of hers when she was growing up – inspired, she had heard, by the artist’s urge to imitate and/or replace some wallpaper. Williams’ quartet was no less agreeable, written in a jazzy idiom detonated by speedy bass-like pizzicatos from Bechtler’s cello, leading to some playful, rhythmically insistent chuffing sounds vocalized by the entire Ensemble. The piece was divided into three sections, differentiated more emphatically at the Music and Museum concert than in the recording by Quartet San Francisco.

In the middle section, perhaps the most satisfying of them all, we slowed down to a Western swing groove with Legatt seizing the lead and showcasing some nifty double-bowing. Here the “Blue” could have categorized as bluegrass as well as jazz. The final section started off even slower, with Legatt playing a cadenza over some weepy cello and viola tremolos. Then we abruptly made a U-turn back to the beginning and its unmistakable chuffing sounds and infectious speed. Very much in a jazz idiom, all four of the players drew solo spots, merrily handing off to one another at a frantic pace as their “Kaleidoscope Concert” took its last spin.

Bechtler was no less diligent in researching Williams than his predecessors. Apparently, Williams (1939-2018) scored more than 200 films and composed music for such diverse TV gems as Monk, Columbo, The Slap Maxwell Story, and The Mary Tyler Moore Show. Maybe it’s time for excavation and re-evaluation.