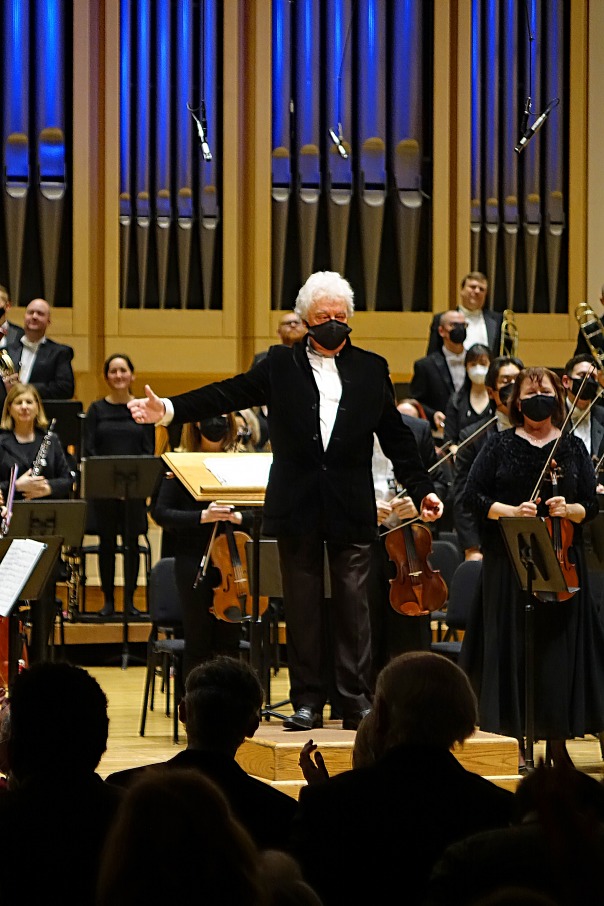 January 14, 2022, Charlotte, NC – When the new Compact Disc digital recordings were first heralded and released in the early 1980s, the mythic story began circulating from Sony and Philips that the dimensions and capacity of the new CD format were determined by its ability to present all of Beethoven’s Ninth Symphony on a single disc. Subsequent refinements to the technology increased the capacity of those discs from 74 minutes of music to 80, leaving Ludwig far out of the equation. The 80-minute capacity we see on today’s prerecorded discs and the recordable CD-Rs we might dub them onto is more suitable for containing Gustav Mahler’s Ninth Symphony – but only if conductor and orchestra are in a hurry. Only the very quickest of the many recordings of Mahler’s last completed orchestral work clock in at 79 or 80 minutes. Completing his Mahler Journey with the Charlotte Symphony Orchestra in his final season as music director, Christopher Warren-Green let it be known that his Ninth would be a more expansive 90-minute experience. There was no intermission at Belk Theater, and program booklets remain a strictly online affair.

Vaccination cards were scrutinized at both the outdoor entrances to the Blumenthal Performing Arts Center and at the indoor entrance from Founders Hall. My mom and I felt very comfortable with the social distancing downstairs in the orchestra section, but no such amenity was granted to subscribers who entered the hall from the lobby – in fact, I’ve never seen the Grand Tier more fully occupied, a gratifying affirmation of the Queen City’s Mahler enthusiasm. The balcony above looked similarly packed. Masking, of course, was compulsory, but ticketholders should chiefly be forewarned that vigilance was strictly enforced at the entrance to the orchestra section. Folks that were late for the first notes of the Mahler performance, between 7:35 and 7:40pm, were obliged to wait in front of TV monitors in the lobby until the conclusion of the opening Andante comodo movement at approximately 8:05.

Each of the outer movements, both preoccupied with mortality and dying, is as lengthy as the two inner movements combined. Only the second movement can be described as lighthearted, and all four are teeming with mood swings. Without adding audible gaps between episodes, recordings conducted by Leonard Bernstein and Herbert von Karajan with the Berlin Philharmonic are divided into 33 and 30 tracks respectively. Those seemed to be very conservative numbers when Warren-Green and Charlotte Symphony immersed themselves in the score, reveling in its seemingly countless contrasts. Emerging with the opening melody from a backdrop of cellos, basses, horns, and harp, the second violins emphatically signaled that all sections of the vast ensemble would have their chances to shine. 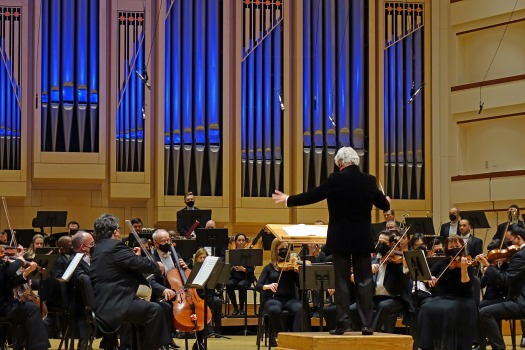 This was by far the most extensive instrumentation we had seen at either Belk Theater or Knight Theater since the beginning of the pandemic. From orchestra level, it was difficult to precisely count all the unmasked flute, clarinet, oboe, bassoon, French horn, and trumpet players arrayed behind the masked string sections. But the percussionists were plain enough when they stood up, either singly or as an ominous group, and there was additional space set aside, upstage and on the stage left wing, for the three trombones, two harps, and the tuba. Curving around stage right to the upstage was an armada that included timpani, a mighty bass drum, cymbals, a gong, snare drums, and tubular bells.

So the prospect of high-volume music was apparent before all the Symphony musicians were fully congregated. Yet when these expected Mahler explosions actually occurred, Mom and I were both taken aback by how loud they were. The difference between sitting at the rear of the grand tier late last spring and sitting in Row O below was compounded by the additional troops and artillery onstage. Earplugs weren’t quite necessary for these fortissimos, but rock-concert decibels weren’t far in the distance. Mom may have nodded off for a few seconds during Gershwin’s Lullaby last year or when Branford Marsalis luxuriated in the luscious Larghetto middle movement of Jacques Ibert’s Concertino da camera. Not this year. Onsets of trumpets, trombones, or percussion could be so sudden that, even if she didn’t revere Mahler, Mom wouldn’t dare close her eyes.

There were plenty of less aggressive surprises scattered across the lordly length of this symphony. In the epic Andante, the harpists reached out to pluck a bass line, and the mournful funereal dirge had the backbone of a military march, punctuated by the wan tubular bells. If you’re new to Mahler, the waltzing liveliness of the “Im Tempo eines gemächlichen Ländlers” (in the tempo of leisurely country dances) might catch you pleasantly off-guard – and what plan did the composer have for a triangle and cymbals playing in unison? The third movement Rondo-Burlesk was brimful of contrasts and contradictions as Warren-Green kept us on the lookout for the next twist. A busy, contrapuntal opening suggested a fugue with frolicsome and comical touches, but midway through this Burlesk, each of the orchestra’s sections seemed to have something soulful to say – not at all the path you would expect leading to a screaming conclusion. 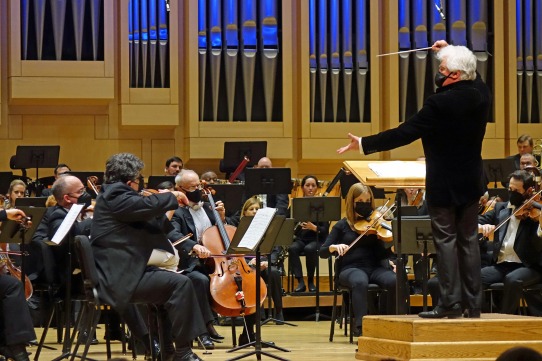 Perhaps the biggest surprise of the evening came at the climax of the Adagio finale when a furious pounding of the big bass drum, topping off a majestic crescendo, suddenly gave way to – in the hushed blink of an eye – nearly total silence. This abrupt whisper of weepy violins, proved that Mahler’s precipitous subsidings can be almost as dramatic as his volcanic peaks. Most of Symphony’s principals distinguished themselves over the course of this epic evening, including oboist Hollis Ulaky, clarinetist Taylor Marino, cellist Alan Black, and concertmaster Calin Ovidiu Lupanu, but the final movement underscored the special praise earned by French horn principal Byron Johns and principal flutist Victor Wang. Even Johns’ one little wobble on the horn came at an ideally aching moment, and Wang was merely perfection in the sublime epilogue.

Originally published on 1/15 at CVNC.org