Review: My Dinner With Andrea from Charlotte’s Off-Broadway 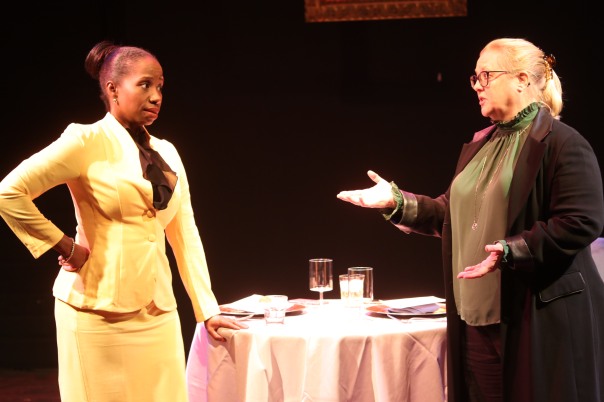 Thanks largely to Anne Lambert and Charlotte’s Off-Broadway, the Queen City’s fiercest proponent of homegrown professional theatre and her spunky little company, we have now seen two provocative new plays by her sister, Susan Lambert Hatem. Not surprisingly, since Lambert is also a founding member of Chickspeare – “all female, all Shakespeare, all the time” was their catchphrase – both of the Hatem plays we’ve seen have been spiritedly feminist.

Lambert directed Confidence (And the Speech) at Spirit Square in 2018 and now takes on the title role in My Dinner With Andrea. Charlotte’s Off- Broadway has moved off-Tryon to The Arts Factory, the stand-in of choice so far for resident theatre companies at Spirit Square while that facility is reconfigured. In Confidence, we had a former presidential aide who was willing to recount her role in crafting Jimmy Carter’s “Crisis of Confidence” speech, but only on the condition that she and her questioner playact the narrative – with her playing the President and the questioner portraying the aide, a role and gender reversal.

Like Confidence, Hatem’s new play is a reaction to the 2016 election. You might presume that an initial reaction would be angry and visceral, leading subsequently to a more reasoned and pragmatic response. This playwright is flipping that order. She’s angrier, more irrational and visceral now than she was three years ago.

Then her heroine was an academic who helped Hatem juxtapose Jimmy Carter’s reasoned, cautious, calculated, and inclusive methods of policy- and decision-making with the infamous 45’s. Furthermore, she showed us how naturally a woman (could the playwright have had Hillary in mind?) would fit into that more intelligent, deliberate, and statesman-like mold.

The anger and impulsiveness of My Dinner With Andrea indicate that there’s more than a little 2020 in Hatem’s fuel tank, firing up her engine. It wouldn’t be too far-fetched to say that Andrea, portrayed by the playwright’s sister, is a female Donald. Or an amalgam of the two 2016 candidates? A devious entrepreneurial maniac who is more ambitious than 45, more pragmatic and intelligent, and less likely to run off the rails and flame out.

After tasting the bitter fruit of whistleblowing, Julia Grace Brandt is a research scientist who can use a job that utilizes her talents without compromising her integrity. She agrees to meet with an old, somewhat estranged friend, Andrea Ranger, who has become a renowned A-lister, on a first-name basis with Serena Williams, multitudes of glitterati, and key influencers. Divorced twice, if I counted correctly, with no kids – and no-thank-you on the subject of motherhood.

Andrea’s next great entrepreneurial target, one that Julia is supremely equipped to spearhead, is the development of a wondrous vaccine, distributed globally, that will wipe cancer, heart disease, and Alzheimer’s from the face of the earth. Lurking behind those wonders will be a genetic side-effect of ridding mankind of men – or at least skewing the female-to-male birthrate ratio from 50-50 to a more comfortable 70-30, if not north of that.

“The future is female,” Andrea says, not kidding at all, though the phrase is familiar. As happens occasionally in dystopian sci-fi epics, she wishes to speed the process.

Certainly, there are sufficient urgent crises facing humanity – and more than sufficient patriarchy screwups – to justify Andrea’s design and haste. Likewise, there are reasons why the highly principled Julia will sit there, hear Andrea out, and negotiate rather than simply walking away. For one, the fabulously wealthy Andrea will very likely make a fabulous salary offer to her old friend. More immediately – and temptingly – they are meeting at Miesha, the most chichi restaurant in all of Atlanta, and Andrea is having their waiter, William, bring out every single delicacy on the menu, from the appetizers to the desserts.

The meal of a lifetime for an unemployed lesbian.

So yes, the resemblance between My Dinner With Andrea and the 1981 movie, My Dinner With André (written by and starring André Gregory and Wallace Shawn), isn’t accidental. Hatem’s script is more purposeful, confrontational, and sexual, a pretty explosive combo in a space as small and intimate as The Arts Factory.

Utilizing the ubiquitous cellphone of 2021, Hatem can brief us on the upcoming action by simply having Julia confide in her partner by phone as she waits for Andrea to make a fashionably late entrance. Back in 1981, we needed Shawn’s voiceover, as he walked toward the restaurant, to clue us in. 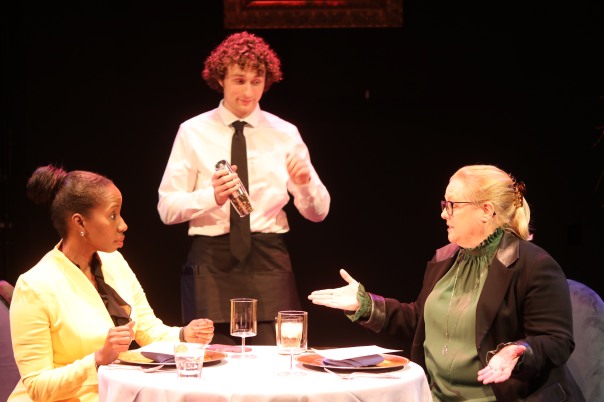 As the posh dinner and job offer unfold, Julia faces a couple of moral dilemmas informed by Hatem’s astute reading of 2020 and the Trump Era. Most obvious is the quandary that many who signed on to 45’s heinous administration ultimately faced. Should I risk soiling my reputation by joining this malignant organization, compartmentalize my work into the good that it might accomplish, and try to curb or sabotage its leader’s megalomaniacal schemes? Or should I distance myself from this creep as far as possible?

If Julia actually takes home Andrea’s prospectus and considers her devil’s bargain, she will probably be gauging her chances of subverting her vaccine development enterprise so that only good comes out of it. Or she may be simply fortifying her powers of self-delusion, finding excuses for allowing herself to be bought off, and placing herself in danger of being outfoxed by Andrea and other members of her brain trust, making her a duped accomplice in their diabolical scheme.

Adding some West Wing gravity to this tête-à-tête, Andrea has Julia ink a non-disclosure agreement before revealing how she plans to change the world. Enhancing the intrigue and giving us a little foreshadowing, William assists in preserving confidentiality by ceremoniously relieving Julia of her cellphone – and her smartwatch. We may think Andrea’s security concerns are frivolous and overblown, but then Julia suddenly comes face-to-face with her second moral dilemma, a climactic #MeToo moment that hatches more confrontation and dispute.

Echoes of that moment reverberated with me during the drive home, for I kept thinking how the incident would sit with Julia on her drive home and when she talked things over with her partner. Does what just happened potentially give her extra leverage down the road if she accepts Andrea’s job offer?

Tracie Frank plays Julia with such elegant cool that I could easily imagine her factoring this possible leverage into her ultimate calculus, for if the world isn’t in such dire straits that Andrea’s remedies are truly necessary, it could be if the psychopath makes headway. Maybe director Marla Brown could have called upon Frank to devour the culinary delights arrayed before her with more gusto to point up her susceptibility to temptation, but we see more than enough Epicurean enthusiasm to suspect there might be chinks in her armor. Frank’s is a nicely calibrated performance when you weigh it accurately, with the simmering rage of an unrepentant whistleblower often lurking beneath the surface.

Lambert has the juicier role as Andrea, seemingly with a green light to go all the way to a “Hillarump” Hillary+Trump if she pleases. Yes, we see her regally dangling all sorts of perks in front of her prey, flexing her wealth, but she also has a shrewd respect for Julia’s scruples, sees that bribery needs to be supplemented with down-to-earth charm and statistical persuasion to have her way. Brown doesn’t rein Lambert in to the extent that her confidence in emerging victorious – now at the restaurant and ultimately in the future – ever seems to wane, but she definitely credits Julia with being a formidable and admirable antagonist.

Matt Howie rounds out the cast as William, nicely complementing his elders. His youth and suave servility give a nice edge to Andrea’s cougar tendencies while cloaking her true motives, and his smiling condescension subtly puts Julia in her place – maybe steeling her spine.

While My Dinner With Andrea compares favorably with My Dinner With André – and with her earlier Confidence – I do wish Hatem had been more thorough in her research, which would have made this Dinner richer in its logistics. Male birthrates actually outpace female birthrates in today’s world, particularly in Asian countries where cultural influences and social engineering are in play, skewing the numbers. You can compound the steepness of that climb with other hills, including the FDA, the CDC, and anti-vaxxers.

How would Andrea outmaneuver and circumvent all those obstacles? Concrete answers would certainly bring this archvillain’s fiendishness to a loftier level. Asking those questions would also sharpen Julia’s acumen.

Fully embracing those considerations, a Dinner 2.0 could be a provocative knockout. Meanwhile, without fully sweating the details, Hatem’s lively play certainly begins offers us a different path to discarding democracy for the sake of a better tomorrow. Sadly, it also makes more sense than the path pursued by 45’s insurrectionists.