Review: Be A Lion 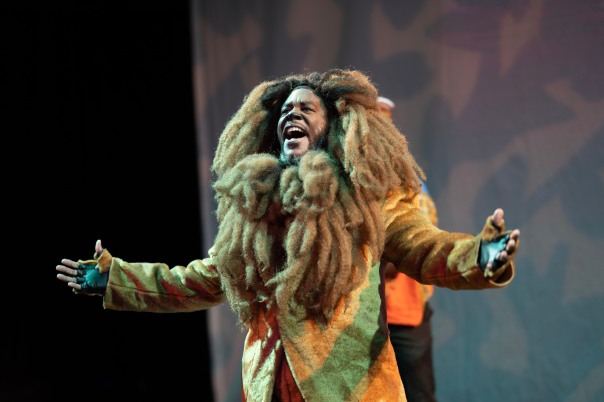 Without much fanfare or marketing knowhow, Rory Sheriff and his Be A Lion arrived on the local scene in 2014. The musical sequel to The Wiz has been produced here five more times since then, has drawn 12 nominations for excellence from the Metrolina Theatre Association at their recently revived annual awards, and was successfully produced at the 2019 Atlanta Black Theatre Festival, where Sheriff was honored with the Best Director prize. So the time was ripe for me to catch up with this triumphant production. Something must have clicked for Brand New Sheriff Productions for Be a Lion to have been reprised so frequently and lauded so widely.

Sure enough, I found plenty to enthusiastically recommend at Spirit Square last Friday Night. Music and lyrics by Sheriff and five others are clearly ready for prime time, costume design by Dee Abdullah and Shacana Kimble is an absolute joy, and choreography by Toi Phoenix Reynolds consistently hits the sweet spot. Perhaps most exceptional among the show’s technical and design attractions is Gbale Allen’s makeup creations, a category that isn’t adjudicated in Metrolina or Atlanta – or even on Broadway. Lion, Scarecrow, Tin Man, and Damneesha – the hellspawn of wicked witch Evilline – are merely highlights in the gallery of Allen’s splendid handiwork. 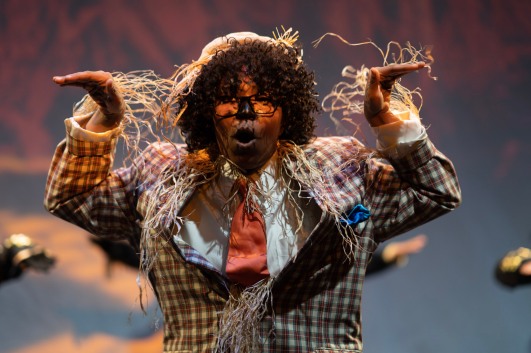 Yet overall, I was underwhelmed. Aspects of Lion were surprisingly rudimentary for a company staple that has been so extensively developed and presumably rethought, particularly Jennifer O’Kelly’s scenic design and Sheriff’s book.

Without the blandishments of fade-dissolves, the scenery is a series of projections on a massive sheet that doesn’t stay still. Nor am I awed by the graphics, which never come close to matching Sheriff’s Broadway aspirations. When you can count the bricks on the famed Yellow Brick Road – and it twists more than a couple of times before terminating at approximately shoulder level – you aren’t seeing much of a road.

More disheartening are the lingering weaknesses in Sheriff’s script, which testify to a lack of tough, honest criticism more than to a lack of talent. Action throughout Act 1 simply drags, relieved only by the splashy costumes and the bravura singing. Really, it’s like nobody has suggested a rewrite in five years across the six-plus BNS productions here and elsewhere. As Lion rounds up the old gang with drop-ins on Tin Man and Scarecrow, encouraged by Miss One (formerly Glinda) to travel to Emerald City and claim his rightful kingdom, Sheriff fails to establish any dramatic urgency for his mission. 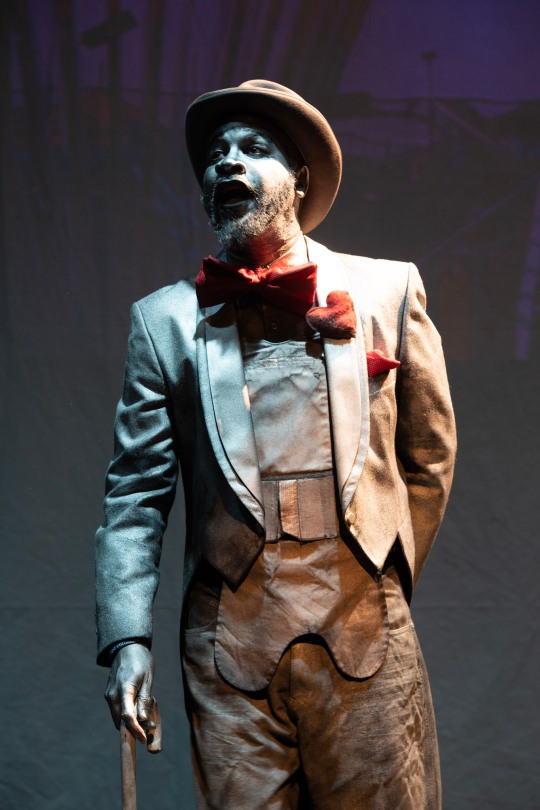 The hybrid offspring of Evilline and a Flying Monkey, Damneesha knocks off her daddy and summons an army of Flying Crabs to muster behind her evil intent. The upshot of this fiendish mobilization? Who knows. We dally instead at a carnival where Tin Man presides, henpecked by wife Teenie, and at a school established by Scarecrow, where she teaches. These are the respective humdrum outcomes of being granted a heart and a brain. Not exactly dramatic substitutes for cutaways to Emerald City, where citizens could be cowering under Damneesha’s tyrannical rule and Gotham City-like chaos could break out as the oppressed masses cry out for a hero.

Not only isn’t there urgency to Lion’s quest, there’s too little drama for Sheriff to build to a big finish and emphatically announce the break. Instead, a prerecorded PA announcement tells us it’s intermission. Axiomatically, that means trouble.

Somehow, Sheriff mostly finds himself in Act 2 – and we find that the writer-director-producer can also sprinkle plenty of comedy and wit in his script while revving up the drama. Damneesha and her Flying Crabs finally do get aggressive, good ole Dorothy is transported – from Harlem in a cute yellow taxi – to Oz and becomes one of the witch’s kidnap victims, and Lion comes up with a clever stratagem to save the day. Oh yeah, there’s definite evidence that Act 2 has been manicured. The Emerald City masses remain out of the picture, and Dorothy doesn’t have much to contribute, but there’s hope here that Be a Lion could evolve into a truly marketable property.

Although I can trace complete turnover in the cast since the last time Queen City Nerve editor Ryan Pitkin covered BNS in a previous life, the talent onstage now at Duke Energy Theater is exemplary, beginning with Melody Williams as the ultra-wicked Damneesha and Frank “Facheaux” Crawford as Cheetah, her hapless dad. Nikki Dunn could pass for a female impersonator as Miss One, she’s so over-the-top and outrageously dressed; and Danius Jones as Miles, Lion’s obsequious mouse servant, has a bit of weasel mixed into has DNA – and a newfound worship of Michele Obama.

At the center of Sheriff’s story, for better or worse, are Tim Bradley as Lion and K. Alana Jones as Ladawn, with the producer (and choreographer) dipping perilously deep into The Lion King in crafting their romance. Lion and Ladawn are a mushy, overlong detour from the cataclysm shaking the Oz kingdom, but the chemistry between Bradley and Jones, fueled by how well she sings and how lithely she moves, keeps them watchable. Bradley never reverts to the big cowardly clown we remember before his audience with The Wizard, but every so often, slight lapses in courage and fortitude add to his texture.

Yet I’m so glad when Lion and Ladawn quarrel and break up, allowing the Oz story to breathe.

While they aren’t as cleverly integrated into Sheriff’s denouement as they were in the classic 1939 Wizard film, you will still enjoy Tin Man and Scarecrow heartily. Graham Williams as Tin Man and Jessika Johnson as Scarecrow not only get the benefits of smashing costumes and makeup, they’re both accessorized with new characters they associate with. For Williams, it’s Shar Marlin playing the termagant ball-and-chain wife Teenie to the hilt. Even better, Johnson gets two Crows to teach, Trinity Muse as Leroy Crow and Cecilia Mitchell as Walter Crow, detonating the Act 2 comedy.

Muse and Mitchell moonlight as minions of the evil Damneesha, Flying Crab #1 and Flying Crab #2. Together, they are her whole army!