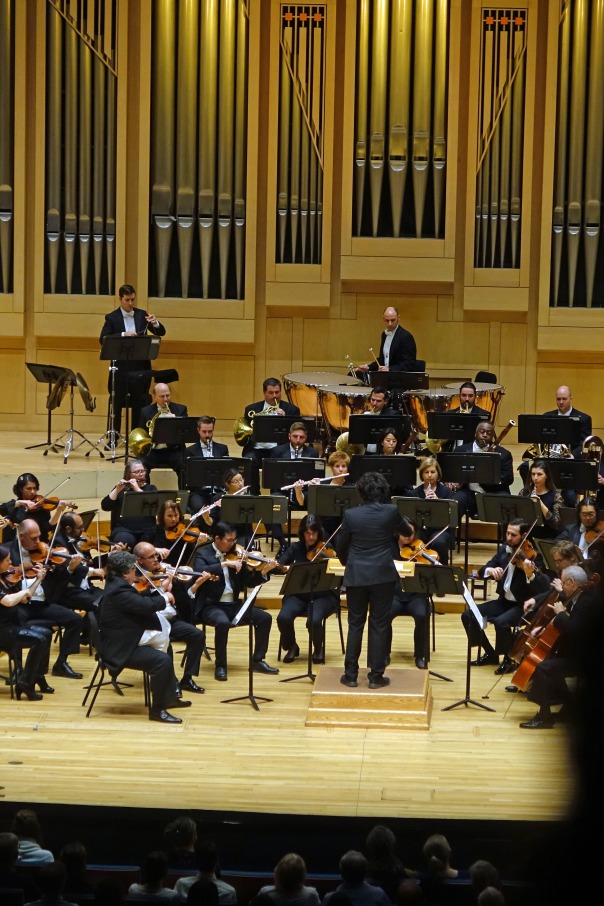 Sometimes orchestras program pieces to meet popular demand, and at other times, they program works to meet expectations or fulfill a sense of obligation. It’s so easy to yield to inertia! This past weekend’s Charlotte Symphony concerts balanced both types of choices. Dvořák’s New World Symphony is so popular in the Queen City that an extra row of seats was set up at Belk Theater behind the already-packed Grand Tier.

Before subscribers could be appeased with the New World they were waiting for, we had to withstand lackluster performances by the CSO and guest conductor Ilyich Rivas of Robert Schumann’s “Overture to Manfred” and Johannes Brahms’ Variations on a Theme by Haydn. Neither performance convinced me that Symphony musicians were familiar with the music or took much pleasure in playing it. I was unsure myself whether I had ever heard these pieces before at the Belk.

My files confirmed how consistently forgettable the ensemble had been tackling this repertoire. CSO had last played the Schumann at the Belk in 2001, when I declared that the orchestra had fallen far short of the composer’s Byronic ambitions. Each of the two occasions since then, when Symphony had played the Haydn Variations in 2002 and 2010, I had found that the results were similarly moribund. Outcomes were perhaps marginally better last Friday night, though it’s still uncertain whether our musicians are completely sold on either of these works.

Wouldn’t it be better for everybody if Symphony put fresh new or unfamiliar scores on their players’ music stands – instead of repeatedly exhuming stuff like this so unenthusiastically?

While Amy Orsinger Whitehead ably headed the flutes and the brass accented well, violins seemed sloppy and lackadaisical in the Manfred, their exchanges with the brass and winds more precise than those with the lower strings. Rivas probably sparked more energy and cohesion than in the performance of the Variations led by Christof Perick in 2010, which observed pauses between variations.

But there still wasn’t enough zest – or dramatic contrast – to assure us that everyone was relishing their part, and there was little of the exquisite delicacy we have come to expect in softer, slower movements since Christopher Warren-Green took over the musical director’s baton. A limpid calm prevailed in successive reposeful Con moto movements that descended into lifelessness before a Vivace revival, and even the Finale, an Andante that can be grander than grand, grew slightly slack though it was still strong. 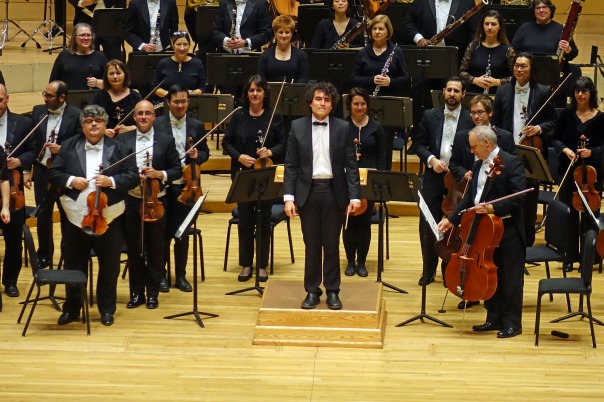 Indicative of the éclat they created the last time they performed Dvořák’s Symphony No. 9, “From the New World,” Warren-Green and the CSO waited only four-and-a-half years to reprise their triumph – and with Rivas on the podium, the orchestra satisfied its subscribers just as fully. The magical mojo of 2015 wasn’t quite replicated, but then again, my expectations could no longer be taken so completely by surprise.

And to be truthful, Symphony didn’t get off to a great start this time, the French horns not as solid as the lordly trombones when we moved from the Adagio section of the opening movement to the sweeping Allegro molto. But the horns didn’t take long to steady and the flutes, Orsinger and Erinn Frechette, were superb; and gosh, the sforzando at the end of the movement had a fierce snap.

Four years ago, Warren-Green took the trouble to wade into the orchestra after its New World performance and embrace English horn principal Terry Maskin for his playing of the “Goin’ Home” theme in Dvořák’s lovely Largo movement. Rivas would not have been faulted if he had done the same. The flutes had a sunshiney glint in their frolics, the soft violins wove mystical enchantment, and the brasses and horns added dignity each time they were cued.

Dvořák’s crowning achievement fittingly premiered in the New World at Carnegie Hall in 1893, and the third movement Molto vivace, inspired by Longfellow’s Song of Hiawatha, has always seemed the most prophetic to me, spawning the film scores of multitudes of Westerns yet to be shot in our rugged plains, canyons, and badlands. All went well here until the ending became too disjointed for comfort.

Rivas regained – and then retained – his mastery in the awesome Allegro con fuoco, where the Old World can be felt birthing the New World and our fearsome Manifest Destiny marches westward, arrogant and irresistible. (“Get over it!” professed patriots might respond.) The Venezuelan-born conductor beautifully navigated the protean moods, and the orchestra keenly grasped the moment. In the wake of the heraldic brass, the violins burst forth with a vigor that had been missing earlier in the evening, adding new summits of grandeur. When the music grew soft, the woodwinds, especially the flutes, sweetened it; each time the brass and strings rallied, Ariel Zaviezo and his timpani triggered the uprising.