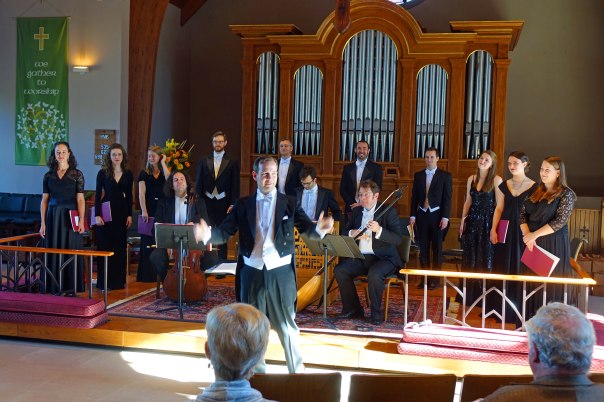 Once you’ve performed the St. Matthew Passion, as Bach Akademie Charlotte did so brilliantly in concluding its second annual Charlotte Bach Festival back on June 15, there is little left for this powerhouse company to prove as it begins its third season. In fact, their third season began in Charlotte and then Davidson after a weeklong residency at the University of Iowa, so they arrived at St. Alban’s Episcopal Church with their “Bach & the Class of ‘85” program well-rehearsed, glowing with the honor of their invitation to perform in Iowa City, and polished after performing the same program in concert twice in the previous three days.

Jarrett made no mention of the change, and seemed quite comfortable with it, revealing that the Scarlatti was chosen more to accommodate his traveling ensemble of 10 voices than to celebrate the composer’s birthdate. That was giving up the cause too easily, in my view, for Schütz was born in 1585 and there was no mention at all of the composers’ dates, either live or in our program booklets. It was unclear whether the vocalists from the BA|CH Cantata Choir – four sopranos, two altos, two tenors, and two basses – were chosen on the basis of merit or availability, for the level of excellence among the 25 singers who had performed the Matthew Passion had been so high. 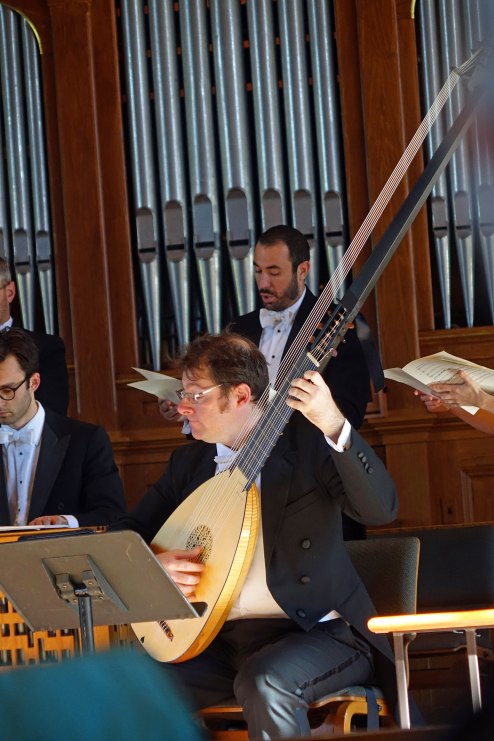 There was certainly no diminution of excellence among the instrumentalists who accompanied them. Seattle-based theorbo player John Lenti distinguished himself immediately in the first two pieces, strumming vigorously over the continuo in the opening Schütz song, and giving the fiery closing section of the ensuing Stabat Mater a percussive edge. Nicolas Haigh had already distinguished himself at the organ throughout the Akademie’s brief history, and cellist Guy Fishman, a principal with the Handel & Haydn Society in Boston, was returning to the Charlotte area for the first time since his stellar solo concert at the first Charlotte Bach Festival last year.

The Cantata Choir had dipped into Schütz’s work back in February, when Jarrett showed his inclination to point up the dramatic contrast embedded in “Das ist je gewisslich wahr.” Once again, the Choir began by ravishing the harmonies of the opening lines of “Selig sind die Toten,” the four men in the ensemble answering and enriching melodies beautifully initiated by the six women. Lenti’s strumming was at the vanguard of the mood change when the choir shifted with a quickened pace from their consoling words, “Blessed are the dead which died in the Lord,” to the more vigorous and affirmative “their works do follow after them.”

A more dramatic shift, from German to Latin and from the promise of heavenly reward to Mary’s keening at the Crucifixion, was in store with the onset of Scarlatti’s Stabat Mater. Jarrett didn’t venture to say where this Stabat Mater ranked among over 80 settings of this 13th century hymn listed in Wikipedia, but it’s certainly among his top choices for works scored for 10 voices – and he was obviously excited to add it to the Cantata Choir’s repertoire and share it with us. 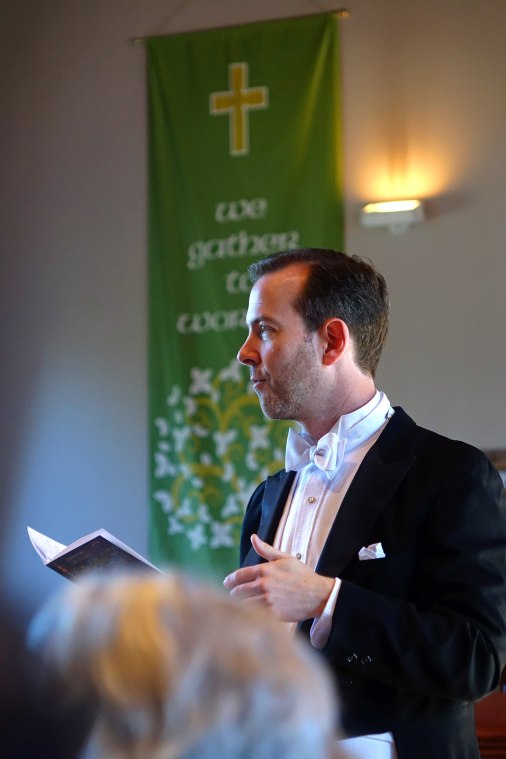 Unlike the traditional Requiem, which is broken into distinctive stages, the poem venerating Mary is continuous and rhymed, following an aabccb scheme from beginning to end. When printed in stanzas, it’s usually presented in three-line tercets, so it’s interesting to observe how various composers divide the 20 tercets in their settings. Pergolesi and Poulenc, for example, wrote their settings with 12 sections, while Rossini and Dvořák preferred 10 – not agreeing at all where the intervals should be. Domenico Scarlatti’s setting was presented in eight parts (his dad, Alessandro, also set the hymn – in 18 sections), tilted more toward the choral idiom than Rossini’s and Vivaldi’s without layering on Dvořák’s orchestral preamble and blandishments.

There was no instrumental preamble at all in the opening “Stabat mater dolorosa” (“The sorrowful Mother”) section, and though the sopranos dominated early here over Haigh’s organ, the men added warm empathy and deeply textured gravity. By the end of the ensuing “Cuius animam gementum” (“Her grieving heart”) section, the Cantata Choir produced a more massive sound in the passage depicting Mary’s grieving and trembling, growing plaintive and pleading at its concluding question: “What man would not weep if he saw the Mother of Christ in such torment?”

Scarlatti’s third section, “Quis no posset” (“Who would not share her sorrow”) was hushed and slowed in Jarrett’s interpretation, so the ensuing “Eia Mater, fons amoris” (“O Mother, fount of love”), addressed to Mary, sounded freshened with heightened speed and volume, with a spate of new counterpoint launched by the female voices. The Choir’s ardor bordered on joy in the penultimate “Juxta crucem tecum stare” (“To stand beside the cross with you”), yet the closing “Inflammatus et accencus” (“Lest I burn, set afire by flames”) began more quietly and focused than the text suggested, virtually a duet with tenor Steven Soph most prominent. Stately harmonies took over in the final tercet, “Quando corpus morietur” (“When my body dies”), cresting in resolute affirmation with the Amens. 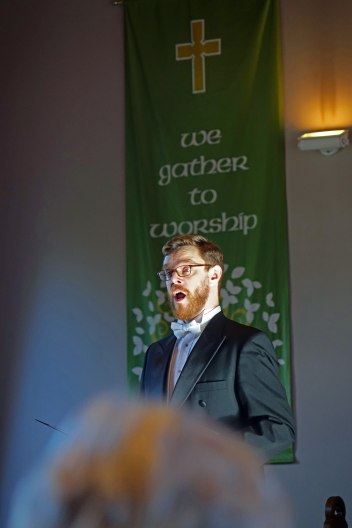 Soph moved downstage to sing the lead voice in Monteverdi’s “Audi coelum” (“Hear, O heaven”), literally upstaged by tenor Patrick Muehleise who vanished behind the Choir and sang the “echo” role at the end of each stanza – and by Jarrett, who gave way to Soph and led the other singers from upstage when they entered upon the duet for the final three stanzas. Certainly this was a lighter, cleverer veneration of Mary, for the vanished tenor only sang the last word of the previous stanza, usually abbreviating that word and transforming it into a different word. Soph’s “benedicam” (“bless her”) thus led to Muehleise’s “Dicam” (“I shall tell you”), but “maria” (“the seas”) was fully echoed to become “Maria,” introducing the song’s subject at last in the fourth stanza. The device persisted after the Choir joined the fun, until the penultimate stanza, ending in “solamen” (“solace”), segued into a full-throated Amen.

Pointing up the inner contrasts of Bach’s motet, Jarrett smoothed the transition between the beguiling Monteverdi devotional to the lachrymose opening line, “Komm, Jesu, komm mein Leib ist müde” (“Come, Jesus, come, my body is weary”). The singers’ acceleration in the ensuing line, saying they grew weaker and weaker, somewhat belied that resigned text before subsiding into a repeated lament on the sourness of their difficult path. Suddenly there was a complete hairpin turn toward happiness when the words “Komm, komm” repeated. Instead of their prior funereal lassitude, the singers merrily bounced the repeated words and the phrase that followed, “I will yield myself to you,” as if they were singing “Mr. Sandman.” After that upbeat ending to the Choral section, the concluding Aria began more slowly, comparatively hushed, and sleepier. But here Bach’s change of mood became more cohesive in Jarrett’s hands, giving us a satisfying ascent and resolution as we reached “the true path to life.”

If it were actually the traditional Latin Requiem translated into German, Musikalische Exequien would be far easier to describe, summarize, and pass judgment on concisely. The genesis of the piece is a little macabre, commissioned by Count Heinrich Posthumous Reuss for his own funeral in 1636 – with texts he chose himself and ordered engraved on the inside of his coffin. Only the first of the three parts of the work has anything to do with the Lutheran mass, embracing a Kyrie and a Gloria in a lengthy Concert section of 27 parts. Scored for six voices and continuo, the Concert comprises about three-quarters of the whole Exequien. It was a wonderful showcase for the BA|CH Cantata Choir’s singers as soloists, as deliverers of delicious harmonies, and as instruments of varied contrapuntal delights. Soph and alto Elizabeth Eschen impressed me most here.

Jarrett once again brought more contrasting contours in the middle Motette section, written for an eight-voice double choir. The prayerful opening line, “Herr, wenn ich nur Dich habe” (“Whom have I in heaven but you”), zigzagged no less than three times in the next four lines, sprightly, then morose, and then almost dancing in finishing with “God is my strength and portion forever.” Concluding his requiem, Schütz puts on his most elaborate – and confusing – show, scoring two different texts, the biblical “Song of Simeon” for a five-voice choir and a trio of soloists singing “Blessed are the dead who die in the Lord.”

The trio is directed by Schütz to sing at a distance from the main choir, so Jarrett deployed them to the rear of the chapel during the second interval. Quite a spectacle to take all this in at a live performance! The program booklet helped me to understand that the soloists behind me were finishing with a declaration that the dead “are in the hands of the Lord and there is no sorrow that disturbs them.” Up front, the chorus overlapped the trio and seized the final words, extoling the Christian messiah as “a light to enlighten all gentiles and a glory for your people Israel.” 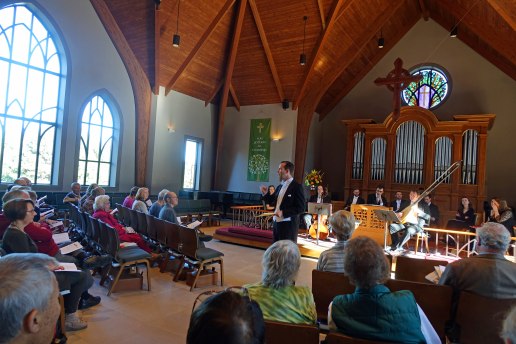 Wrestling with two foreign languages and waves of contrapuntal complications with no instrumental respite – and no intermission – for over 100 minutes, the audience earned the praise that Jarrett offered them for their zeal and endurance. I strongly suspect they were ready for more.