Review: World Premiere of Letter to a Friend in Gaza at Spoleto Festival USA

A rarity in the US, anti-Israel theatre pieces are nothing new in Europe – more than a couple were running when I first visited the Edinburgh Fringe Festival in 2005. So it wasn’t surprising to me that the artistic team for the world premiere of Letter to a Friend in Gaza were flying in to Spoleto Festival USA from across the Atlantic; hailing from France, Germany, and Israel; some with Syrian, Iranian or Palestinian roots.

What was surprising was that documentary filmmaker, theatre director, and actor Amos Gitai, the creator of this multimedia piece at Emmet Robinson Theatre, is a native Israeli who resides in Paris and Haifa. He served in an Israeli military helicopter unit during the Yom Kippur War of 1973, was shot down by a Syrian missile, and the 8mm film footage he shot during his service triggered his career.

As a lifelong supporter of Israel, now planning my third trip to the Holy Land late this summer, what really rattled me was hearing the most damning descriptions and denunciations of Israeli military actions spoken in Hebrew – with substantiating film projected behind the performers with English captions. What we heard in Arabic, mostly from poet Mahmoud Darwish, was comparatively benign, lyrical, and poignant. Touching, really, as delivered by father and daughter Makram and Clara Khoury, Israeli actors with Palestinian roots.

Sarah Adler’s Hebrew descriptions, quoted from Ha’aretz newspaper correspondent Amira Haas, were read in a just-the-facts Dragnet monotone that probably shortchanged the journalist. Another Hebrew text by Yizhar Smilansky (also known as S. Yizhar) is more confrontational, children asking their parents tough questions about their horrific deeds or acquiescence and getting weak answers that echoed Nazi war criminals responding to their accusers.

Before the actors took their seats at a long table outfitted with microphones and video cameras, there was a curious and chaotic film representing the sacking of the Holy Temple by the Romans and the expulsion of the Jews from Jerusalem. Lots of darkness, flames, and fleeing people, with a narrator reading from Jewish historian Flavius Josephus’ Antiquities – written under the watchful eye of the Roman Empire and its emperor.

That account eventually dovetailed with a litany of Arab villages remembered by the Khourys that had suffered a similar fate and survived only in nostalgic memory. What Gitai was obviously sketching was a Palestinian Diaspora that should resonate deeply with Zionists and Jews, whose storied Diaspora lasted 19 centuries from Roman days until the hotly disputed founding of Israel. 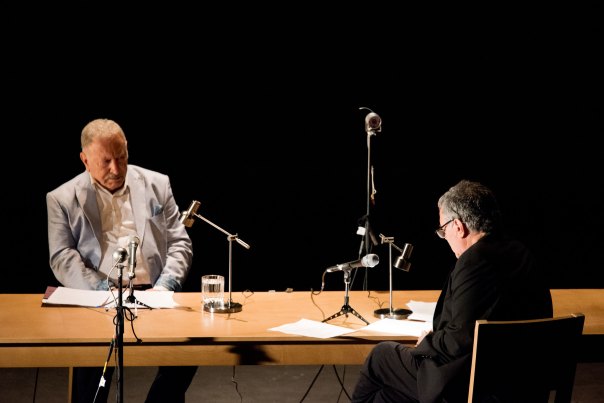 Palestinian nostalgia was sweetened – and saddened – with elegiac music played on violin and oud, with singing from assistant director Madeleine Pougatch, who filled in for one of the performers whose visa was held up in administrative red tape. While Pougatch was singing, the multimedia presentation was most effective as the cameras facing the Khourys sprang into action and their video images were projected behind them – processed so that the live actors looked rather ghostly behind themselves.

Gitai didn’t join the actors onstage until late in the action when he read what sounded like an Israeli apology to the Khourys but was actually an excerpt from Albert Camus’ Letters to a German Friend. Just in case you had missed the Nazi analogy earlier.

While Letter to a Friend in Gaza was often cogent, powerful, and convincing, it was also one-sided and abrasive at times. There was plenty slingshots-versus-tanks and David-Goliath imagery following up on bombed-out footage shot Gaza and/or Occupied Territories, but not a single image of terrorist actions or carnage inside Israel. At the Sunday matinee I attended, people walked out during the show and afterwards while Gitai was sitting down for a talkback moderated by festival director Nigel Redden.

Undoubtedly, kindling controversy and sparking discussion were prime aims for Gitai in creating this piece and for Redden in staging the world premiere at Spoleto. They’ve definitely hit the bullseye on those counts with a piece that deserved more than five performances in Charleston. Letter to a Friend in Gaza is slated for another brief run at the Theatre de la Ville in Paris, September 4-7, and Gitai is reportedly in talks with Cal Performances at UC Berkeley.