Celebrating its 30th season, the Savannah Music Festival is weathering a series of transitions that began less than a year ago. After 16 seasons as the SMF artistic and executive director, Rob Gibson abruptly resigned last summer. Marketing director Ryan McMaken moved up to the artistic directorship and David Pratt, formerly with the Queensland Symphony in Australia and the Savannah Philharmonic, returned to the US as the new SMF chief executive.

The new leadership didn’t stumble dramatically in the shadow of a 2018 classical lineup that included guest appearances by Murray Perahia, Audra McDonald, Marc-André Hamelin, the Zukerman Trio, Yekwon Sunwoo, and a residency with the Zurich Chamber Orchestra, newly headed by star violinist Daniel Hope, SMF’s associate artistic director in the classical sphere. Lars Vogt, Juho Pohjonen, The Tallis Scholars, and the Jerusalem Quartet are on the bill for 2019, and in the first full-scale collaboration between the Festival and the Savannah Philharmonic, a new piece by jazz pianist Marcus Roberts will premiere in a Phil concert that will also include works by Borodin, Stravinsky, and Gershwin.

Perhaps the news that was forthcoming from Hope was telegraphed when Zurich did not commit to repeating its visit in 2019. Stating that the decision had been made “to reduce the amount of international travel time to which he is obligated,” the announcement that Hope’s 16th season at SMF would be his last officially dropped on March 5 – barely three weeks before the 2019 Festival began.

We can begin to grasp the impact of Hope’s departure on SMF’s 2020 programming by surveying the scope of his participation this year. Easily the most active performer at the Festival, he is slated to appear in five of the six “Daniel Hope & Friends” concerts. During the 17-day festival, Hope is also performing with the Atlanta Symphony (March 30) and teaming with Saebstian Knauer on an “Homage to Yehudi Menuhin” (April 12). In what will no doubt be a touching valedictory, Hope will play and his novelist father will narrate “Christopher Hope Presents ‘My Son the Fiddler.’” (April 13).

In his first three performances of 2019, Hope was playing with a zest and dedication that indicated he is sorry to be leaving. Few of the occasions I’ve covered in the past 10 years – only the “Kreutzer Sonata” he played with Knauer in 2011 comes instantly to mind – saw Hope in the same fiery form he brought to the stage of the Lucas Theatre on Saturday night, playing Beethoven’s Triple Concerto with the Atlanta Symphony, pianist Wu Han and her husband, cellist David Finckel.

The crowd, the occasion, and the gauntlet laid down by Beethoven’s score – not to mention having his name up in lights on the Lucas’s movie theatre marquee – might have actually given Hope a touch of the jitters as he fussed over the location of his iPad-holding music stand near the lip of the stage. Frankly, Finckel was the steadier string player in the first solo salvos of the Triple’s opening Allegro, but after the ebullient trialogue with Han and a spirited interjection by Robert Spano and the Symphony, Hope was locked in and absolutely brilliant, his double-bowing as sharp as steel.

Finckel was a mellowing agent throughout, graciously restoring calm in the outer movements and surpassing himself with a heartfelt intro to the middle Largo. Han proved to be an equal partner and provocateur in the outer movements, especially conspicuous in the closing Rondo alla Polacca where she delivered dreamy excursions in the middle and an extended ramble away from closure before Hope pounced on the presto-paced exchange that carried us to the end. Hope’s fireworks with Han had made it obvious that applause was forthcoming at the end of the epic opening movement, and a standing ovation was no less inevitable here.

Gravitating toward the extreme downstage at the Lucas, Hope and his trio mates were unintentionally underscoring the acoustic problems faced by Spano and his orchestra. Behind the proscenium, the strings tend to get muddied and high frequencies are noticeably muffled. Cellos and clarinets sound best, but extra piccolos would have made the ending of “Overture to Egmont” sound more like Beethoven intended, though Spano beautifully judged the contrast between the final rousing rally and the calm that preceded it. 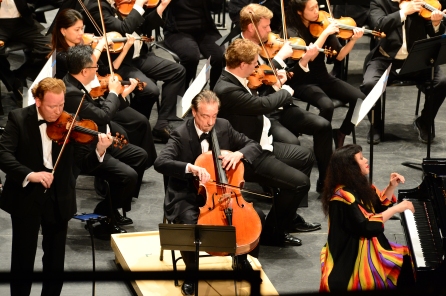 Schumann’s “Spring” Symphony No. 1 showcased Spano’s deftness even better, with sharper section work from his players and balances that played better with the hall. There was fine thrust from the strings stating the opening Andante, although brighter percussion sounds other than the triangle were missing on the fringes of the later Allegro marking. Cellos and French horns excelled in the ensuing Larghetto, where Spano sculpted the fluid tempos and dynamics into pleasing shapes. Repetitions of the big tune never dulled the penultimate Scherzo, and the Allegretto animato e grazioso brought the evening to an exciting close, with the drums, trombones, and strings delivering the knockout punch.

Hope didn’t appear at the first “Hope & Friends” of the season on Friday night, and his entrance at the Lucas the following evening, notwithstanding the marquee, was without any fanfare marking his farewell season. Touchingly, that moment came late Sunday afternoon when Han mounted the Trinity United Methodist Church platform and warmly dedicated the ensuing Chamber Music of Lincoln Center concert to Hope, describing the joys of his playing and the joys of playing with him. Han also proved quite adept at emceeing, personably introducing the three piano quartets on the bill. She vividly described the relationship between Suk and Dvořák and detailed the despondency that sparked Brahms’s Quartet No. 3, along with the gun-to-the-head moment that concludes it.

Han, Finckel, Hope, and violist Paul Neubauer did the rest of the talking with their instruments – until Neubauer’s ill-fated maiden voyage playing with an iPad after intermission. While Hope sat back in his chair, grinning and laughing and in no hurry, Han explained the situation and helped turn the damn contraption on. Hope’s ease and relaxation probably served him best in the ensuing Dvořák Piano Quartet No. 2 when we reached the luscious Lento second movement. After yet another achingly lovely intro by Finckel – and an exquisite fadeaway – Hope began the same melody extremely softly yet piercingly, working up to a blaze of high intensity. Another ebb then flowed into a reprise from Finckel. With Han’s interjections, the movement was like a miniature concerto until the give-and-take abruptly ended with a couple of unison sforzandos that tossed us into a maelstrom.

The Suk that opened the program was brimming with inspiration and showy bowing. Yet it was useful for Han to have reminded us that this was Josef Suk’s Opus 1, finished with Dvořák’s encouragement and premiered when the composer was just 17. For all its excitement and appeal, I couldn’t push away the thought, especially in the tempestuous outer movements, that a Beethoven or a Brahms would have made even more of the inspired materials that Suk was working with. The inner Adagio, with another soulful Finckel intro was a nice foretaste of the Lento to come from Dvořák – not to mention the wondrous Andante at the heart of the epically anguished Brahms 3, which began with an eloquent and sad intro from Finckel and featured Neubauer’s best moments.

Both the Brahms 3 and the Dvorak 2 had been presented twice before in Savannah at previous festivals, but the Suk was an SMF premiere. With such a dazzling quartet of musicians advocating for it so passionately, the Suk proved worthy of such esteemed company.

A similar mix of familiar and unfamiliar informs the “& Friends” concerts. Hope sat out the all-Mozart opener that I attended, but Pohjonen was at the keyboard for both piano quartets – with an extraordinary feel for the composer – so all was well. This was the second go-round for No. 1 and the fourth for No. 2, but the String Duo No. 2 for Violin and Viola and the Prelude and Fugue No. 2 for String Trio were new to Savannah. The “& Friends” sequel offered edgier fare, with Hope playing lead violin opposite Vogt in Shostakovich’s Piano Quintet, the third time this gem has been presented during Hope’s tenure, alternately raucous and haunting in its pivotal Scherzo and Lento movements.

Otherwise, Hope sat on the sidelines. Rebecca Clarke’s Dumka, ranging from pizzicato delicacy to Gypsy fire, was presented by pianist Simon Crawford-Phillips, Neubauer, and violinist Simos Papanas. Nice to know that this piece, championed by Hope on a Naxos recording, was getting a second hearing at SMF, but Schubert’s Fantasy for Piano Four Hands and Niels W. Gade’s String Sextet were actually receiving their SMF premieres.

As the stage was being reset for the Sextet, Hope sauntered to the front of the church from his seat in the second row of pews, not bothering to climb up onstage, and gave us an impromptu introduction to Gade. Our host emphasized Gade’s talents, his travels back and forth from his native Copenhagen to Leipzig, and his association with Mendelssohn, then the director of the Leipzig Orchestra. It was the first time Hope had addressed an audience at the 2019 Savannah Music Festival, seemingly spontaneous and unplanned.

Keeping Hope’s remarks in mind, I suspected that Gade had taken some of Mendelssohn’s influence back home with him when he wrote his Sextet some 16 years after his mentor’s death, for there are echoes of the elder’s Octet in the Dane’s music, especially in the opening movement. The Kim brothers, violinist Benny and cellist Eric, longtime members of the Festival’s “& Friends” ensemble, played the leads on their instruments, prime reasons why this premiere was a resounding success.

Getting ready for the long drive home to Charlotte, I turned around in my front row seat and told Hope, “Well done, sir.” Shrugging, he replied, “They did all the work,” no doubt assuming that I was referring to his prefatory remarks.