Previews: The Great Beyond and The Ghost of Splinter Cove 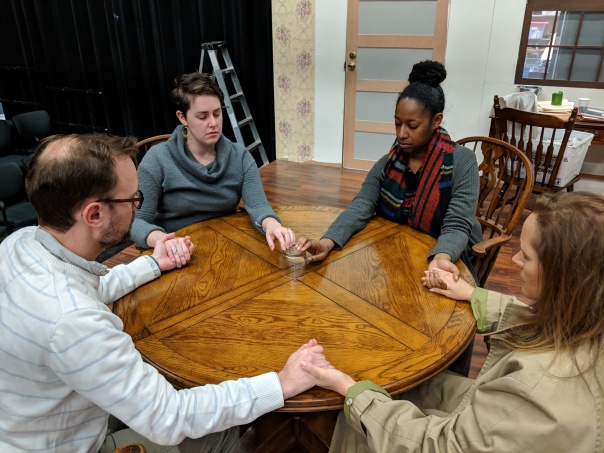 An old living room card table shaking uncontrollably during a candlelit séance… an unidentified ghost – or two – lurking in the dark basement, where kids are at play… and an 8-year-old child who has been missing for nearly 40 years.

These are some of the chilling elements in two new nail-biting plays hitting the QC. Upstairs with the adults at the séance, the Actor’s Theatre of Charlotte production of The Great Beyond begins previews this Thursday on the Queens University campus, officially premiering next Wednesday. Next Friday at ImaginOn, The Ghost of Splinter Cove takes us downstairs into the basement with three imperiled kids in a world premiere Children’s Theatre of Charlotte production.

Both spooktaculars are by renowned playwright Steven Dietz, who splits most of his time between Seattle and Austin, where he teaches his craft at the U of Texas. Dietz has written and adapted more than 40 plays, and a slew of them have been performed in various theaters across town, including God’s Country, Lonely Planet, Yankee Tavern, and Becky’s New Car (a “Show of the Year” winner in 2010).

But these two newbies would never have been written if Dietz hadn’t gotten on a plane and met with Adam Burke and Chip Decker here in Charlotte.

Burke, the artistic director at Children’s Theatre, and Decker, his counterpart at Actor’s Theatre, had cooked up their concept during a 2015 meetup. Cooperating was feasible between their two companies, but what kind of project would bring audiences together to see the kinship between Decker’s adult theatre and TYA – Burke’s theatre for young audiences?

Decker and Burke both have considerable experience in bringing new plays to their theaters, so it was obvious that their joint project would be a new script. But what if they commissioned two scripts, each one designed to funnel audience from their theater to the other theater while both shows were in production?!

Somehow the two plays and their stories would have to interlock. Yet to encourage rather than force audiences at one company’s theater to also see the other company’s play, each of the two plays would have to stand independently on its own. The concept that would be named The Second Story Project was born – in excited brainstorming interspersed with copious cups of coffee.

When Burke and Decker decided to move forward, there were no funds earmarked for the project, no playwright commissioned to create the scripts, and no parameters detailing how the two stories would interconnect. There was just one dynamite concept that had never been tried before.

“It’s always a leap of faith to do anything, especially something new,” Decker observes. “We just both hit on it, felt it was a good solid idea, and when you feel that way, you have to jump in with both feet and hope there’s a safety net at the bottom.”

Looking back on it, Dietz was a super-obvious choice. Multiple productions of his plays had been presented at Actor’s and Children’s, but Decker and Burke were thinking about advertising in trade publications or soliciting proposals – until the successful run of Dietz’s adaptation of Jackie and Me at ImaginOn turned on the lightbulb in Decker’s skull. 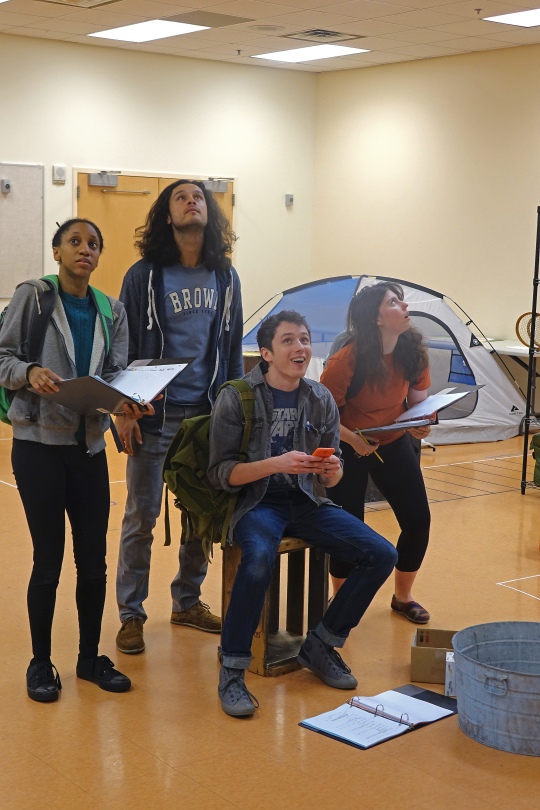 Burke had sort of blocked out the idea of looking to an established adult playwright, calculating that the TYA piece would be the higher hurdle.

Dietz was a little wary, wanting to make sure that there wasn’t some special issue or theme that his scripts were expected to address. Getting reassurances of his complete freedom, he warmed to the prospect of such an unprecedented challenge.

The playwright was also on Burke’s wavelength with respect to the primacy of the TYA piece. It would be the more difficult piece to write and take more time. So it needed to be written first. Unlike other commissions that Dietz has fulfilled, neither The Ghost of Splinter Cove nor The Great Beyond turned out to be a play he would have written anyway. No barely-started scripts or scribbled scenarios were on his studio shelves waiting for these unique commissions.

Dietz suspected that he would make many false starts on his youth play – and he did. The upstairs/downstairs idea didn’t occur to him immediately, but when it did, it seemed like an elegantly simple way to make his plays interlock. But what kind of full-length play can be staged in a basement?

“I had this little tiny notion,” Dietz reveals. “I had a friend who had his kids try out his camping equipment in their basement once. And of course, that is what’s beautiful about writing for young people: where they go on that camping trip in their imagination is much more dynamic than getting out even on the San Juan Islands, which is near my house. Because it’s in their imaginations, so it can be anywhere.”

Especially when your brand-new camping gear is a birthday gift, you’re in a strange haunted house for the first time in your life… and there’s a smartphone app your dad bought you that makes your whole camping adventure come alive!

So that’s the downstairs core of the Second Story Project. From time to time, Dad calls down from upstairs, making sure the kids are settled in and sending down snacks. The two plays interconnect with those conversations – we only see Dad in The Great Beyond – and there are key props that will be common to both of Dietz’s eerie dramas.

Upstairs, where the séance happens, the parents are having a dinner reunion after a great family loss, and we learn why the kids have never visited this house before. For Dietz, there was a unique benefit in crafting his two new plays as a matched set.

And they’re not necessarily alive. Bwa-ha-ha!