Review:   By the Water

Compared with Cape Hatteras, Wilmington, or Charleston here in the Carolinas, the borough of Staten Island up in New York City hasn’t historically been known as a punching bag for hurricanes. Until late 2012, when Hurricane Sandy battered three NYC boroughs, Staten Island was hardly in the conversation when compared even with nearby Long Island. Zeroing in on the impact of Sandy on a Staten Island family and community, Sharyn Rothstein’s By the Water not only changes the conversation, it also fiddles with history.

Taking in Ryan Maloney’s storm-ravaged set design at Duke Power Theater, with its waist-high waterline, you would likely expect Rothstein’s drama to be about the folly of resettling near a hurricane-prone shore. Or we might assume we’ll encounter the innocent victims of unscrupulous real estate developers, or come face-to-face with the new New York calculus of climate change. None of the working-class folk in this Three Bone Theatre production, smartly directed by Ron Law, seems capable – or sufficiently woke – to address any of these subjects. 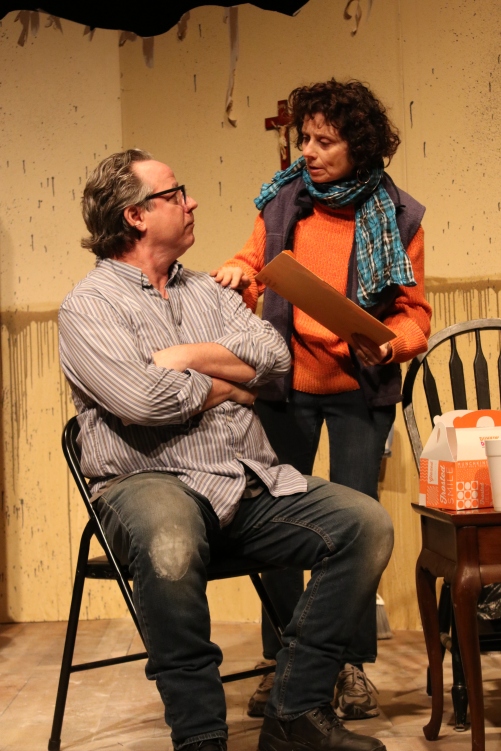 As a result, the topicality of By the Water becomes rather shrouded in a mist of Murphy family grudges and disputes, further distanced from pressing issues that might concern us by the neighboring Carter family’s involvement. The Murphys seem as broken, fallible, and struggling as the Lomans were in Death of a Salesman, and the heads of this devastated household, Marty and Mary, have a fairly similar relationship.

For Marty, it’s axiomatic that he should rebuild and restart. To his eldest son, Sal, it’s obvious that his dad should move to higher, safer ground – and way past time that his mom stop blindly supporting whatever Dad says, especially after all his past misjudgments and misdeeds. Philip and Andrea Carter, the Murphys’ longtime friends and neighbors, have decided that they wish to accept a government buyout and move to Montclair, New Jersey.

But this isn’t a laissez-faire situation, where the Murphys and the Carters are free to do whatever they wish, no harm done. The government’s offer to the Carters and other survivors in the neighborhood will be withdrawn unless 80% of the community decides to sign on. Marty is fervid enough about his cause to go out picketing against the buyout.

A stretch at a hotel and returning to a home that boasts a few sticks of furniture, a hardy fridge, and the better part of one wall is starting to fray Mary’s unquestioning loyalty to her husband. The younger son, Brian, is returning home after a stretch of own – in prison as a result of his past drug addiction. He sides with his dad, seemingly to keep his favor, but his endorsement is tainted by his rap sheet, and he’s actually more intent on regaining the affections of the Carters’ daughter, Emily. Her parents, of course, know all about him, so they don’t approve.

Could work in Brian’s favor, right? He and Emily are both City kids. Minds of their own.

A corner of the stage is set aside for the wee wharf where Brian and Emily rendezvous, providing a respite from the family quarreling and the neighborhood politics, which grew a little repetitious during the 91-minute performance on opening night. More substance in the debate would have dispelled the tedium. It might have been worth pondering what government should and shouldn’t subsidize on these fragile wetlands. And a more eloquent Marty might voice the notion that, given the historical infrequency of tropical storms and hurricanes hitting Staten Island, it’s not such a stupid plan to live out the 20-30 remaining years of your life in the house your father built rather than transplanting to Montclair.

While Rothstein does disappoint me on topicality, and in giving us any sense that she’s intensively researched the Tri-State housing market or Marty’s prospects for homeowner’s insurance, there are times when she brings us vividly into the moment. Despite skirting the basic survivalist questions of home life without a roof, the playwright etches her characters with finely judged individuality and gives us a nuanced feel for the Murphys’ family dynamics.

Law and his cast are definitely on Rothstein’s wavelength, and the only major mistake they make is in overestimating the Duke’s acoustics. As the inimitable Tania Kelly demonstrated last year in Three Bone’s Every Brilliant Thing, it’s easy to convince yourself that you’re being heard up in the balcony when people are actually having problems in the second row.

While you might not catch the ends of all of Marty’s sentences, Thom Tonetti delivers all of the outsized personality and bossiness that fosters Mary’s adoration and submission. We are definitely dealing with a force that can sway community sentiment when we encounter Tonetti, and we are not surprised to learn that Marty is capable of taking audacious and catastrophic risks. Physically, Susan Stein projects the frailty that perfectly fits Mary but with a salty New York accent that constantly reminds us of the street savvy and toughness that lurk within. There’s a tenseness and pallor to Stein as well, hinting that Mary has reached the end of her tether.

Law would have been safer casting an older actor to get the right look for Sal, the elder son, but there’s no doubt that Tommy Prudenti captures his straight-arrow essence in his Charlotte debut. Sal is a living white-collar rebuke of his father’s values, yet at key moments, Prudenti convinces us that he still craves Dad’s love. Tim Hager’s portrait of Brian adds another black sheep to his gallery, and if you saw his Franz in Three Bone’s Appropriate last summer, you won’t be surprised that he’s as lovable a reprobate up in the New York City wetlands as he was down on the bayou.

The accent is different, but this bad boy remains a magnet for one unattached lady who may be ready to rekindle an old pre-prison flame. I think you’ll like the sassy flavor that Sonia J. Rosales brings to Emily in her Charlotte debut. She’s certainly more liberated than the two moms we see here.

It’s slightly surprising to see Law pairing Lillie Oden with Joe Copley as the Carters, but they work beautifully together. Opposed to the Murphys’ plans, there’s a clear gender difference in how their oppositions play out. Like Mary, Oden as Andrea is more apt to be conciliatory, and like Marty, Copley as Philip inevitably becomes enraged and bellicose. You get the idea that Rothstein believes that the world would be so much more peaceful and sensible if women were in charge. But where would her drama be without all her guys?