Like all of the other plays I’ve seen in August Wilson’s epic Pittsburgh Cycle ­ and I’ve now seen nine of the 10 – Two Trains Running is about community struggle and personal redemption. Each of the dramas digs into one of decades of the 20th century, and after Brand New Sheriff began its Wilson explorations with Jitney and the 1950s, their sophomore effort at Spirit Square takes us into the turbulent 1960s.

With so much memorable social and civil rights upheaval in that decade, not to mention the horrifying Birmingham church bombing and the assassinations of Medgar Evers and MLK, it’s no surprise that community struggles are more at the forefront of this Wilson work than the others. As it was in the ‘50s, when we looked on the city through Jitney, Pittsburgh is continuing its predatory campaign to demolish the predominantly black Hill District in the name of urban renewal. After Becker’s gypsy cab depot in Jitney, the city is moving in on Memphis Lee’s Restaurant.

Another young man is returning from incarceration and trying start a new life – but not quietly this time. Sterling is handing out leaflets for an upcoming Black Power rally and befriending Hambone, a mentally handicapped person who was cheated years ago by the white grocer across the street. At the same time, Sterling is seeking out a job or at least a lead from everyone else he speaks to at the restaurant. Standing up for other black people cheated by a white system – and for himself – Sterling is clearly a powder keg that will soon go off.

Memphis estimates that he’ll be back in prison in three weeks. As the days pass and he sees more of Sterling, who grabs whatever he can, Memphis will revise that estimate downwards. 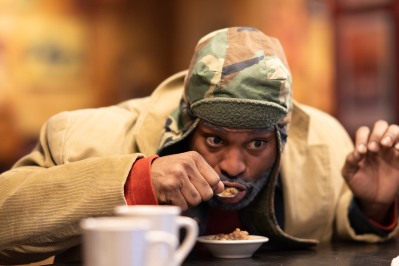 Sterling teaches Hambone a Black Power slogan, but Memphis isn’t so easily swayed. It’s the central issue for black people of that time, especially here in 1969 after the MLK murder. Do they wait patiently and peacefully for what is rightfully theirs, marching and petitioning to make their wishes known – or do they resort to the same kind of violence that kept their people down? Memphis insists on doing things the right way, holding out for a fair price from the city for his property, firing the craven lawyer who advises him to cave.

Looking at Memphis’s regular customers, you’ll find additional evidence that MLK’s ideas didn’t die with him. Nobody intends to join the rally. A more popular road to self-fulfillment is winning the daily numbers game at odds of 600-1, and it’s Wolf who haunts the place, taking all bets, often through unauthorized use of the restaurant’s phone. The sagely and cynical Holloway will play a number as readily as Memphis or Sterling, but to change your life, Holloway recommends a visit to Aunt Ester, the 322-year-old soothsayer who lurks behind a faithfully guarded red door in an alley down the block.

Risa, the troubled waitress who has scarred herself, disparages the men who throw their money away on the numbers. To her mind, they’d get a better return from their quarters if they just dropped them in the jukebox. Until recently, she’s been a follower of the Prophet Samuel, but currently her rock and redeemer is lying in state across the street at West’s Funeral Home. She has no desire to see the man in a casket, but Sterling goes through the long lines waiting to see the Prophet and snatches flowers from the site and presents them to Risa, whose head he’s trying to turn.

It’s another illustrative instance of Sterling flouting decorum and convention. Why should her qualms get in the way of enjoying a few beautiful flowers that would die and be trashed in the next couple of days if she weren’t caring for them? West certainly doesn’t notice or mind, Sterling maintains. It’s true. When West comes by every day, he’s looking for Risa to serve him another cup of coffee and Memphis to accept his latest lowball offer for the restaurant.

The parallel rituals are significant, two of the sparkplugs that keep Wilson’s drama humming. The grocer fends off Hambone’s daily demand for the ham that was promised to him, and Memphis refuses to allow West to steal his property away for a bargain price.

BNS and director Corlis Hayes, in their second Wilson outing at Duke Energy Theater, are getting really good at this. Although smaller than the design the playwright describes, James Duke’s set captures the spirit of the time beautifully, perfectly calibrating the restaurant’s waning appeal so that we see it as a warm, welcoming place. Or at least we can imagine it that way, for Tim Bradley as Memphis is not at all the deferential restauranteur, arguing with customers, barking at Wolf for running numbers on his phone, bragging about duping West, bossing Risa unnecessarily, and expressing general disdain for his lazy people.

That’s all very much on the page, so Bradley finds ways to keep us empathizing with Memphis. Hayes and LeShea Stukes have far more latitude with Risa as we watch the waitress going about her job and reacting to various advances. Stukes plays her as sullen and cynical, allowing Risa’s resentment of her boss’s scolding tone to occasionally surface. Seeing her smile late in Act 2 is like seeing the sun come out after fives days of stormy weather. By the time that happens, we may suspect that the jukebox being out of order is troubling Risa as much as Prophet Samuel’s death and her boss’s bossiness.

Devin Clark struts around as Wolf like an arrogant sleazeball, but there are more depths, contours, and vulnerabilities to him than the iconic Sportin’ Life as he talks about himself and strikes out with Risa. Ramsey Lyric’s costume designs certainly help Clark strut his stuff, but they also help us to chart Jonavan Adams’s progress in his portrayal of Sterling, fresh out of prison. Hayes and Adams have worked together before on Wilson’s plays, so they both know the strength, the brashness, and the seething frustrations of these strapping young men. Trust me, Adams’ work as Sterling is even more powerful and nuanced than his 2017 outing as Levee in Ma Rainey’s Black Bottom.

BNS continues to have admirable depth in their Wilson lineups. You can understand why Jermaine A. Gamble would gravitate to a role as salty as Holloway, whose sharp observations are mixed with a strong belief in the supernatural, expressed in an unwavering advocacy of Aunt Ester’s powers. Gamble makes Holloway a reasonable man, good reason for having this kind of restaurant around. He’s the neighborhood. But the disruptive Hambone, restricted to little more than one repeated line, wouldn’t jump out at you as a plum role to audition for. Dominic Weaver makes it one in a performance of astonishing intensity and authenticity.

It was probably a group effort to make Weaver look so frightfully grubby as Hambone, but Lyric and Hayes draw my kudos for the sensation West makes each time he enters. Wilson prescribes that the undertaker is always dressed in an all-black outfit, including black gloves that he wears indoors, but designers only add a black hat in about half the productions I’ve tracked on YouTube – and none of them are as imposing as the formal chapeau Lyric chooses for Sultan Omar El-Amin. Hayes layers onto this formality, decreeing that El-Amin must meticulously spread a napkin across his lap at each sitting.

With such outré ammo, El-Amin steals each of his scenes without raising his voice to a level that might lead you to seriously suspect that he doubts his own power. By the manner he holds his cup and saucer, you’d think he was at high tea! From a man who has specialized in portrayals of angry, resentful, and mixed-up young men, El-Amin’s confidently restrained performance as an established 60-year-old widower is a stunner.

Two Trains Running at Spirit Square is a good place to climb aboard the complete Pittsburgh Cycle that BNS is planning to present in coming seasons. You won’t miss a thing because BNS is planning to reprise its previous production of Jitney in May. Then they plan to present Radio Golf, the final drama in the Cycle – and Wilson’s last completed play – next season. Two Trains is not the last stop, but you’ll need to catch it this week before it closes.