Enemy aircraft buzzes across the London skies at all hours, bomb blasts shake the earth and light up the night, and tall buildings you have known your whole life are in flames or rubble. So who are the people you hate most in life? If you’re the protagonist in Matthew Bourne’s Cinderella, it isn’t Hitler or Nazi Germany. No, you’re likely still bedeviled by that nasty stepmom of yours and those dang stepsisters who are constantly lording over you. Sir Matthew – who has brought us Sleeping Beauty, The Red Shoes and Edward Scissorhands during the new millennium – has transported dear Cindy into the frenetic heart of the London Blitz. With projection design by Duncan McLean, lighting by Neil Austin, and surround sound by Paul Groothuis, he has plenty of brilliant accomplices in the heist.

Setting his scenario to Prokofiev’s Cinderella ballet score, the famed choreographer only seems to be going off the rails in adapting mankind’s most universal tale to his own purposes. So many variants of Cinderella have been told around the world that Children’s Theatre of Charlotte had no hesitation about staging their own little anthology, Cinderellas of the World, in 1995 – or presenting no less than three more Cinderellas since, a commedia, a salsa, and most recently, a Jazz Age Cinderella riff in 2015.

Bourne’s is different enough – and of course, non-verbal enough – to present some difficulties for youngsters and oldsters expecting the usual castle, fairy godmother, and pumpkin coach. Or a dashing eligible prince at an elegant evening ball. After flashing the title on a scrim, specifying the time and place, and running a quaint British newsreel on what to do during an aerial assault, this production leaves you on your own to figure things out. It’s helpful to peep into your playbill before the lights go down.

Keeping his New Adventures troupe busy, Bourne adds a trio of stepbrothers to Cindy’s domestic tormentors – and an invalid father, the only family member truly worthy of our heroine’s suffering toil. Stepmom Sybil and stepsisters Irene and Vivian are marginally less cruel than you might remember them, substantially more urban and well-to-do. Costumer and designer Lez Brotherston is not to be constrained by the presence of working-class drones, that’s for sure. 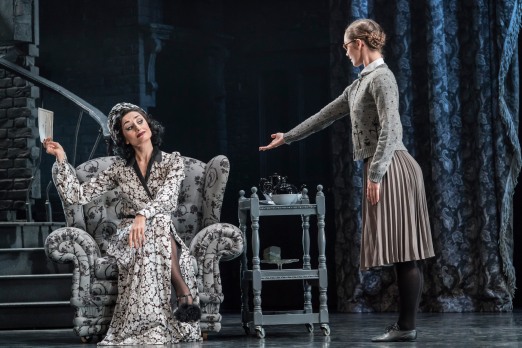 Dressed in a matching hat and dress long before it’s time to depart, Mom is more likely to take a swig of her favorite alcoholic beverage than worry about her daughters’ matrimonial prospects or fawn over a young prince. There are Blanche DuBois elements for Madelaine Brennan ((alternating with Anjali Mehra in this double-cast production) to offer us in this role, but she might also bob her like a duck leading her gaggle of children. Or she might wink at a budding homosexual relationship between two young military men. She’s full or surprises, our most rounded character.

Invitations do arrive for a posh social event. None of them, of course, gets handed out by the evil Stepmom to Cinderella, who is chiefly beset by a stepbrother who is hyperactive, another who fetishizes her beloved sparkly shoes, and her father’s frailty. Cherishing those dazzling shoes already in her possession does not preclude an outbreak of magic, though you shouldn’t expect mice or gourds. A sleek silvery vision, Paris Fitzpatrick descends on the family drawing room long before Mom, the sibs, and their escorts vacate the stage. 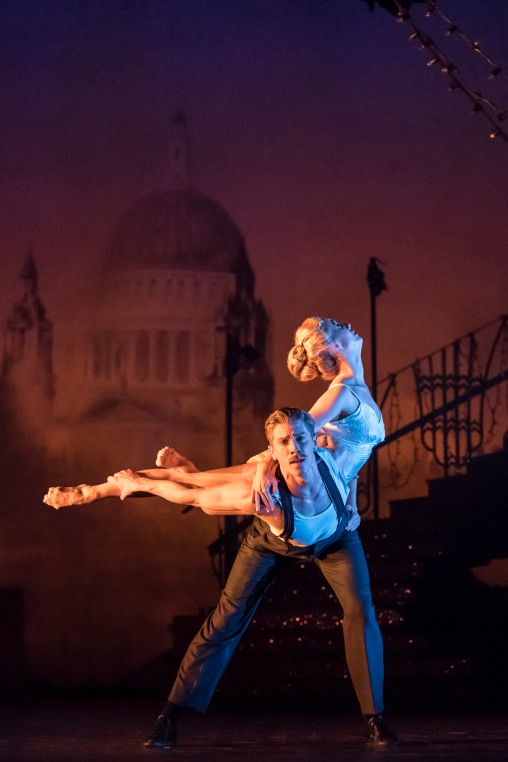 The Angel begins his ministrations by bringing Cinderella her true love through the front door. He is not a prince. Instead, he is Harry, The Pilot – literally heaven-sent if you take the notion that, staggering into the hall in a bomber’s jacket, he has been shot out of the sky during an aerial battle. Whether shot out of a plane or injured on the ground by an exploding bomb, Harry’s head bandage – and his dance moves – clearly announce that he’s been seriously wounded. With Cindy’s true love already in view, there must be a major adjustment to the family’s antagonism. They throw the unwanted visitor out onto the street before gaily departing for their soiree.

There is a bit of sleepy fantasy before Cinderella follows his sibs, enough for Bourne to skip over The Angel’s more magical exploits. No spells or fairy dust are cast before we have adjourned to the Café de Paris. Yet all can admire her there as she makes her climactic entrance midway during Act 2 to the music Prokofiev composed for this breathtaking moment, descending a winding staircase against the backdrop of the Club’s midnight-blue curtains. Not only have Cinderella’s gray cardigan and drab skirt been tossed aside, her hair is so newly gilded that we can readily forgive Harry for not recognizing her. Later, when she reverts to mousiness, the split-up pair of slippers credibly affirms her identity.

Ashley Shaw is every bit as luminous now as Cinderella as she was when we first saw her in 2013 as Sleeping Beauty – and a little more poignant. The scenario is darker here in some ways, for this heroine isn’t assailed at the very awakening of her womanhood. Amid the cinders of a grimy London under attack, time is beginning to pass Cinderella by. Bourne feels that the gravity of wartime infuses Prokofiev’s score, which premiered in 1946, and it certainly suffuses the chemistry that the choreographer/director creates between Cindy and Harry.

Here there is a romantic postlude after the soiree scene and, unlike elegant princes who have courted Cinderella before, Andrew Monoghan bares his chest as Harry on their first night. Amusingly enough, Prokofiev’s music demands unmistakably, insistently and loudly that midnight has arrived, even if Bourne’s storyline hasn’t imposed any previous restrictions or curfews. It’s during Cinderella’s frantic return through the streets of London, as a relentless bombardment crescendos, that Brotherston reminds us most spectacularly of his presence.

This is where we can say that Bourne really does improve upon the chaste fairytale we all know. Both the separation and the reunion of his lovebirds prove to be freshly emotional and moving.