Two years ago, when The Mermaid Hour first came to town as a reading stage production at Actor’s Theatre of Charlotte, the David Valdes Greenwood script seemed fresh, urgent, and dramatic. In the binary world of 2016, the 12-year-old child at the heart of this story, Vi, née Victor, was pressuring her parents to let her start taking hormone blockers, the first step in transitioning to womanhood. Coping with a transgender child felt like heavy stuff for Vi’s parents, Bird and Pilar, working-class Bostonians. Freaking out seemed a reasonable reaction when your child, dressed as a mermaid, launches a YouTube video that gets 20,000 views.

Today, it’s a world where binary and non-binary gender concepts coexist, and while there’s a good chance that you haven’t quite gotten the new terminologies down, you’ve probably gotten a helpful memo or two – and very likely gotten the drift. Sexual freedom doesn’t merely imply a wider latitude of accepted actions, it also signifies identifying as each of us sees fit.

So in a beautifully designed full production by Actor’s Theatre of Greenwood’s drama, it’s not surprising to discover that the 9th grader playing Vi, Toni Reali, is a non-binary actor who prefers they as their pronoun of choice. That will be a lot for many who are seeing The Mermaid Hour for the first time to wrap their heads around. But for those like me who have already accomplished that, I’m not sure that the expiration dates for the story’s peak freshness, urgency, and drama haven’t already passed.

It’s fortunate, then, that the Actor’s Theatre reprise directed by Laley Lippard layers on so much visual lyricism, a magical mix of set and sound design by Chip Decker, costumes by Carrie Cranford, and lighting by Hallie Gray. Adults and even Vi’s best friend Jacob look comparatively humdrum, and so do their surroundings. But when we ascend to Vi’s bedroom, the aqua colors glow and the mermaid couture glitters – worn by both Vi and her hermaphroditic online inspiration, Merperson/Crux.

Merperson seems to float in a rainbow ether as they declaim the “Mermaid Hour” podcasts that enflame Vi’s ambitions, taking up the space of what ordinarily would be the child’s window onto the outside world. Of course, Vi’s bedroom is also the studio where she records her YouTube manifesto, her mermaid outfit more basic and makeshift than the splendor that Alex Aguilar gets to model as Merperson.

Part of the impression the podcast star and their prodigy make is a shared aspiration to transcend everyday life. The exotic, the outrageous, the risqué, and the enchanting are in exquisite balance in these scenes, but the consternation caused by the 20,000 views garnered by Vi’s video now strikes us as an overreaction. When YouTube, Twitter, Facebook, and crowdfunding sensations regularly make the Nightly News, Vi’s surprise that her video would elicit such a massive response seems just as yesterday as her parents’ shock. 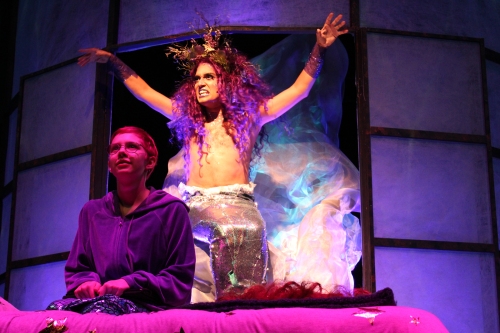 Though Decker could probably pot down his microphone a couple of notches, Aguilar strikes an important balance of his own, clearly connecting with Vi over the web with his urgings and yearnings yet adult and archly artificial in ways she couldn’t understand. Reali heightens this dimension of the mermaids’ chemistry with a wonderful lack of artifice, so spontaneous and unaffected that Crux’s protectiveness toward them late in the show seems perfectly natural, even though the mermaid reemerges on a city street dressed in leather. 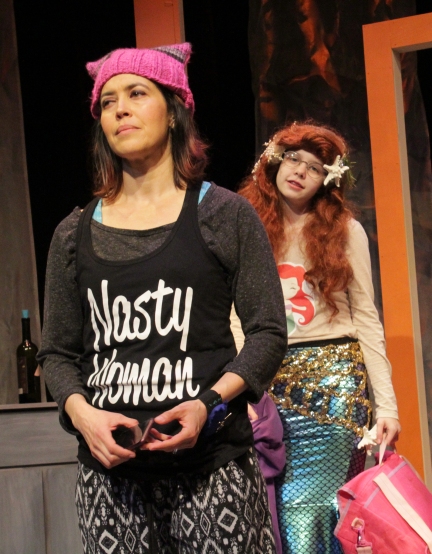 Two of my fave Charlotte performers disappointed me a little as Vi’s confounded folks. Adyana de la Torre-Brucker had to shoulder the burden of being the most stubborn obstacle to Vi’s urges, but her take on Pilar’s irritation at discovering that maybe she didn’t quite rock being a mother struck me as too energetic. A little more heart and a little less stressing would work wonders. Meanwhile, Jeremy DeCarlos, who has previously demonstrated the ability to be cast as anything, was flunking working class cluelessness as Bird – sorry, the man radiates too much savvy – until he fairly nailed a lengthy monologue toward the end, earning a respectable grade.

As Jacob’s mom, Mika, Amy Wada had a clearer, more interesting path to credibility. What alarms Mika is that her Asian relatives across the Pacific now know about Vi’s video – and that their grandson is adored by a pink-haired boy who identifies as a mermaid. Laughing off your elders isn’t so easily done in ancient civilizations, and Wada carries off her globalized dilemma well.

With a cast this diverse, I doubt anyone will mind that nobody has a New England accent, despite the fact that Bird’s monologue makes it clear they’ve resided in Beantown for quite a while. At the calm center of all this specious uproar is Alec Celis as Jacob, the gay object of Vi’s adulation. He firmly tells Vi that they can be friends, nothing more, but doesn’t give her grief over the video. The fact that he and Vi have exposed themselves to each other in his bedroom hardly earns a shrug when Mama Mika freaks. What ticks him off – mildly – is when Mika tells him that he and Vi can’t associate.

By default, Jacob may be the best role model we see onstage, because he rolls with the post-binary gender tide rather than pushing either way. Anyone expecting high excitement from The Mermaid Hour might do well to follow his example. Although Greenwood’s script doesn’t sizzle with drama, it provides powerful affirmation for trans and non-binary people in the audience who don’t often see themselves portrayed onstage. It also injects some remedial education into theatergoers who have slept on their trans neighbors’ existence or their worth until now. With some fabulous color and lighting.