As scarce as modern music was in Charlotte Symphony’s classics concerts last fall – or anything that wasn’t by Beethoven – subscribers can be delighted (or appalled) by the cavalcade of moderns this spring. Sibelius, Ravel, Prokofiev, and Bernstein were all beautifully represented at Belk Theater in March, encouraging Charlotte’s staunch traditionalists to discard their modern music trepidations at the beginning of April and come out en masse for Rite of Spring: Reinvented, an evening of Stravinsky.

Further enticement to come and hear Christopher Warren-Green leading the orchestra came from Charlotte Ballet. Newly led by Hope Muir in her first season as artistic director, the company would not only reprise George Balanchine’s setting for Apollon musagète, they would also be premiering a new choreographic setting by Peter Chu for the seminal Rite of Spring.

The proven excellence of Symphony in modern repertoire, the excitement of a collaboration with Charlotte Ballet, and the lure of a world premiere probably all contributed to filling the hall with subscribers and newcomers. Yet there was another element in play. While the Apollon served as a calling card for the company’s magisterial authority in all things Balanchine, the world premiere of Chu’s Rite served as a showcase for their backup Charlotte Ballet II troupe, as well as their company apprentices, youth ballet participants, and students in the Charlotte Ballet Reach program.

Serving children 7-13, Reach is obviously an impressive program with branches at the Ivory Baker Recreation Center, the Albemarle Road Recreation Center, and the Hickory Grove Recreation Center. Of the 67 performers involved in Rite of Spring, 48 were from the Reach program, all performing for the first time at Belk Theater. Some of these kids had never attended any event there before.

Such an event would be a big deal for parents and relatives – as it is when Charlotte Youth Ballet performs Ovens Auditorium or Knight Theater elsewhere in town. Conceiving his Rite of Spring as a community event, Chu didn’t hurt ticket sales at all, for those friends, parents, and relatives certainly came out to see these students perform.

What they saw raised Symphony and Ballet to a higher plateau, even in the Apollon reprise. Because Symphony had been reduced to approximately 30 players for the most recent run of Ballet’s annual Nutcracker, it had been awhile since the full ensemble had performed from the orchestra pit in their collaborative relationship. And because Opera Carolina seats the press down at stage level, this may have been the first time I’d heard them performing in the pit from the vantage point of the grand tier.

From the downstairs level, the sound of the Charlotte Symphony can be slightly constricted from the pit, although our main attention in opera is always on the stage. Up in the grand tier, where my Symphony tickets are, I found that the confines of the pit added a warm glow to the sound, a welcome aura for patrons who might find the Belk’s acoustics too clinical and in-your-face when the orchestra plays from the stage.

Performing Apollon to live music also had a gratifying effect on the Charlotte Ballet performance. Strumming on Apollo’s lyre, Josh Hall seemed to be playing the instrument for the first time, precisely in sync with Stravinsky’s score instead of vaguely going through the motions. The newfound synergy between Balanchine’s choreography and Stravinsky’s helped to make the reprise of Hall’s performance fresh again.

So did the continuing grace and charm of his three muses, Chelsea Dumas as Calliope, Sarah Hayes Harkins as Polyhymnia, and Alessandra Ball James as Terpsichore. Even the iconic sun-god tableau, perhaps the most compelling Balanchine image that Jean-Pierre Bonnefoux and Patricia McBride gave to us when they took the reins of Charlotte Ballet, was freshened by the live music. Hearing the delighted surprise of so many ballet newbies in the crowd to this famous ending freshened it more.

Depicting a human sacrifice, Stravinsky’s scenario was definitely communal – but also barbaric, no more heartwarming than Shirley Jackson’s classic, “The Lottery.” Yet in setting this oftentimes harsh music for a large group of children who hadn’t finished middle school, Chu and costume director Aimee Coleman weren’t aiming to turn this scenario into pure sunshine. 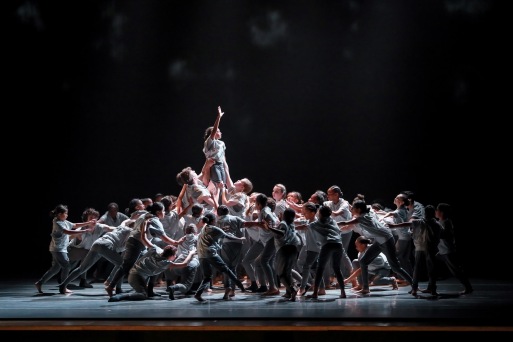 On the contrary, the most haunting images Chu and Coleman created with their large cast was of waves of migration – poor peoples under stress, fleeing war and tyranny, caring deeply for their children, and looking for a peaceful homeland. Exactly the kind of people that America’s ruling party doesn’t want to think about, let alone welcome. Chu and his large cast, to put it another way, turned the primitive barbarity of Stravinsky’s original scenario for the Ballet Russes in 1913 into a more modern barbarism – showing the effects of tyranny, war, and callous indifference upon unmistakably good people.

I’m not sure Chu’s scenario needed to be quite as inchoate as the refugees’ lives that he depicts. Showing us the tyrants, the jackboots, or the marauders that the good folk were fleeing might have given a more substantial shape to what we were witnessing. Nor did I feel that the Charlotte Ballet II dancers were stretched anywhere near to their fullest. Yet Chu’s images of mass migration and parents fretting their children’s survival were more than sufficiently powerful to make the big audience at the Belk feel involved in this community happening.

The event also seemed to be special for Warren-Green and the Symphony musicians. Apollon is more sedate than you expect Stravinsky to be, and the ensemble called forth all its beauties. But when we reached barbarities of Stravinsky’s Rite, nobody in the pit was holding back, and the essence of the music came through with all its primal force.