Barely a minute before the end of his final speech at the Masonic Temple in Memphis, supporting striking sanitation workers and hurling defiance at injunctions against their protest marches, Rev. Martin Luther King grew famously prophetic. He told his people, hours before he would be assassinated that, like Moses, he had climbed to “the mountaintop” where he could see the Promised Land, and – like Moses – he might not get there with them when they arrived.

In her 2009 drama, , playwright Katori Hall follows King beyond that pinnacle to Room 306 at the Lorraine Motel where the civil rights champion spent his final night on April 3, 1968. She goes to great lengths to show the iconic Nobel Prize winner as a mundane human being. He’s not above fretting about the size of his audience, frolicking in a pillow fight, bumming smokes from a hotel maid and flirting with her, lying to his wife, and failing to wash his hands after he pees. His socks need darning, and his feet are smelly.

There are things to be admired about this approach when you watch the current Actor’s Theatre of Charlotte production directed by April Jones at Hadley Theater on the Queens College campus. Unlike the Blumenthal Performing Arts production at Booth Playhouse in 2014, which pushed back a little against the notion that King was humdrum, Gerard Hazelton is more comfortable with Hall’s irreverence toward the Reverend, letting us see that King had some personal charm and self-awareness to go along with his oratorical magnificence.

Hazelton’s charm combats the threat of King being upstaged by the housemaid. Certainly an attention grabber, Camae is energetic, nervous, somewhat alluring, and very much in the mold of Clarence in Frank Capra’s It’s a Wonderful Life: sent – and incentivized – from above. Hall is no less irreverent toward divinity and Christianity than she is toward MLK, allowing the Almighty to take a break from Her busy day to take a phone call from Room 306.

Perhaps afflicted with some real nerves on opening night, Erica Truesdale unintentionally shielded Hazelton further from being upstaged when she first entered, rushing her lines past the point of intelligibility. If you clock the show, you might be shocked to see that runtime is 85 minutes instead of the 105 minutes promised in the playbill, but that is only a minute or two quicker than timings clocked at Booth Playhouse and the 2011 Broadway production. So the big problem isn’t pacing, although repeated rehearsals could have convinced Jones that her players needed to make a beeline through the mundane section of the script to reach the divine and visionary sections as quickly as possible. 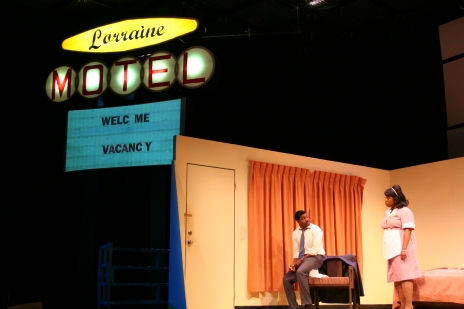 You’ll find that set designer Chip Decker and lighting designer Hallie Gray might also be chafing against the drabness of an entire show set in a motel room devoid of luxury. Decker adds a cheesy marquee to simulate a chunk of the motel’s exterior, and Gray brings up the lights way beyond what we’d expect from a couple of lamps, adding some cheer. Toward the end, Decker dons his video designer hat and, working with Andrew Sargent, explodes the action in a manner that still reminds me of Picasso at the Lapin Agile.

By that time, Truesdale had settled in and had long since been operating near the top of her game. We only find out what that is when Hall’s script belatedly reaches lift-off. At that point, it’s quite exciting to see Hazelton and Truesdale hitting on all cylinders. The teamwork pays off from the moment that Martin sees through Camae’s disguise, a moment that came through more clearly for me than it had at Booth Playhouse four years ago.

Hall never plumbs the true depths of King’s character. Nor – as August Wilson might have done – does she contemplate his significance within the totality of the African American diaspora. Yet despite her apparent irreverence toward MLK and accepted gospel, Hall winds up mythologizing her protagonist in very apt fashion.

Everybody doesn’t get an envoy to prepare him or her for the afterlife. King draws a rookie, so the initiation becomes a little slipshod – until the end, when we can see a biblical design. Like Moses, MLK is granted a vision of his people’s progress that his final speech affirmed so confidently and defiantly. He beholds it with us from a vantage point that confirms that he belongs on mountaintops. Like, say, Rushmore.