Since making his Charlotte debut at the end of 2001-02 season, directing a triumphant Barber of Seville, Bernard Uzan has been a key part of the Opera Carolina story for over 15 years. His artistic contributions to numerous productions – including The Marriage of Figaro, Così Fan Tutte, Faust, Roméo et Juliette, Carmen, Lucia, Nabucco, The Pearl Fishers, and last season’s reprise of his Barber – have been among the most memorable during principal conductor James Meena’s tenure as the company’s general director, which began one season earlier.

With the advantage of hindsight, it seems inevitable that when Meena cast about for an adventurous new piece to present, the first contemporary opera at Belk Theater since Margaret Garner in 2005, he would light upon David DiChiera’s Cyrano. Not only has Uzan directed this opera – twice – at Detroit’s Michigan Opera Theatre, where it premiered in 2007, he authored the libretto. Compounding that inevitability, DiChiera commissioned Margaret Garner for Michigan Opera, the company he founded and led.

Adding poignancy to the current Cyrano revival, DiChiera disclosed that he had been diagnosed with pancreatic cancer this past April, about the same time that he announced his retirement. Yet the 82-year-old composer and impresario was observed sitting next to Uzan at the Student Night preview performance, still tweaking his legacy magnum opus.

Like Henri Cain’s libretto for Franco Alfano’s 1936 Cyrano de Bergerac, Uzan strives to retain Edmond Rostand’s original verse. Predictably, Uzan’s highlighter seems to have fallen upon many of the same passages, but his emphases are different. In the opening scene, where Christian and Roxane first become captivated with each other while Cyrano is dispatching assorted foes, both Uzan and Cain are taken by Cyrano’s enthused exclamations when invited by Roxane’s duenna to a rendezvous the following morning. Despite Cyrano’s preternaturally long nose, he might win Roxane’s love!

Cain and Alfano include the lines where Cyrano proclaims that he now has 10 hearts and 100 arms – where he feels too strong to combat dwarves, calling for giants instead – but Uzan and DiChiera revel in them, repeating them as they bring the scene to a close. Earlier when Cyrano is parrying swords and insults, there is an extended skirmish with a Marquis in the entourage of the wicked Comte de Guiche, who also fancies Roxane. Cain seized upon the unique action display in this altercation, where Cyrano composes an impromptu ballade while dueling the Marquis. Uzan emphasizes the witty preamble to the duel, when Cyrano responds to the Marquis’ feeble insult of his nose by improvising a bevy of insults he should have hurled – in various styles that include aggressive, friendly, kindly, thoughtful, dramatic, and enterprising barbs.

Although the scores were unveiled more than 70 years apart, DiChiera’s music fits into the era of Strauss and Puccini almost as comfortably as Alfano’s, though the newer opera leans more towards cavatina and less toward aria and cabaletta. There are no spiky outbreaks of dissonance or raucous percussion to daunt operagoers, for the orchestration by Mark Flint, newly revised by Steven Mercurio, is both lively and lovely. Better yet, Mercurio is in the pit conducting the Charlotte Symphony, the Opera Carolina Chorus, and the men of the Johnson C. Smith University Choir, giving the music his stamp of authenticity.

The man behind the nose is baritone John Viscardi, who impressed me more and more as the evening progressed. Cyrano’s flamboyant self-caricatures weren’t nearly as spectacular coming from Viscardi as those jubilant exclamations, and I exited the opening scene feeling that we hadn’t sufficiently explored the poet’s yearning for the beauteous Roxane or the critic’s self-loathing for what he finds in the mirror.

If the rendezvous with Roxane in the next scene at a poets’ bakery doesn’t offer ample opportunities for lyricizing while his beloved is revealing her adoration for Christian, the sinuous path of her confession does give Viscardi the opportunity to underscore the fact that Uzan demands real acting from his singers. There is real snap to the ensuing episode when Cyrano’s fellow cadets invade the bakery and our hero meets the newly-enlisted Christian for the first time. Even before he volunteers to write Christian’s love letters, his enthusiasm toward the man Roxane idolizes – despite the contempt he has just absorbed from him – testifies to his own idolatry of Roxane. When he does make his pact with Christian, a spark is lit that burns brightly for the rest of the opera.

Viscardi burns brightest in the moonlit balcony scene when Cyrano is forced to step in for the handsome Christian and woo Roxane under the cover of darkness. Here Cyrano’s improvisations are so ardent and beautiful that I feared Christian might realize, an act too soon, how much Cyrano adores Roxane and how fervidly she reciprocates. That realization does come on the battlefield after the second intermission, but Rostand compressed the timeline so cruelly there that neither Christian nor Cyrano could disclose the truth to Roxane before her newlywed husband perishes.

Both in his writing and directing, Uzan makes key mistakes in the closing convent scene that affect what Viscardi leaves us with as Cyrano. You would never know that Rostand titled his Act 5 “Cyrano’s Gazette,” for no mention of Cyrano’s gadfly writings remains in the libretto. Nor does Cyrano’s best friend Le Bret come to inform Roxane how Cyrano’s satires have led to his undoing. Yes, Cyrano will read the farewell letter he wrote to Roxane on Christian’s behalf one last time before he dies, but we don’t hear any tasty tidbits from his Gazette to remind us what a witty rogue he was. 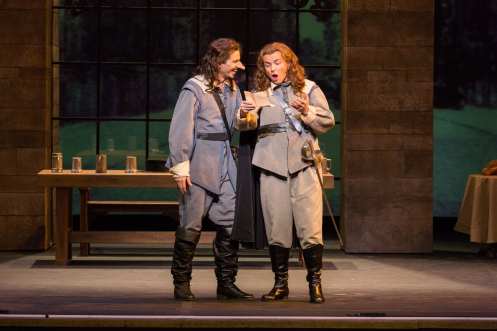 Those who are introduced to Cyrano through this opera will need to remember his wit from the opening scene, but surely everyone should be given a firm grasp of the moment when Roxane realizes that Cyrano penned every one of Christian’s glorious letters – and risked death to deliver them. As director, Uzan needs to sharpen the business where Viscardi stops reading that farewell letter and Roxane sees, totally transfixed, that he’s reciting it. Hung over from past encounters with Cyrano de Bergerac, I’m always in tears at that moment, but I’d like to be sure newcomers experience it with the same power.

Aside from that sloppy denouement, soprano Magali Simard-Galdés brought perfect enchantment to Roxane. There was a growth curve to her performance that theatergoers and opera lovers alike will savor. Through her girlish confession to Cyrano, Simard-Galdés is somewhat superficial when she sings, bubbly like a Rossini heroine. But in the moonlight, where she comes to adore Cyrano’s soul through his voice, she is not merely transported. She begins to be transformed, and we hear it in her newly rich responses, when she honestly believes she’s hearing Christian’s true self for the first time.

I’d forgotten that Roxane, with bravery to match Cyrano’s, follows Christian on to the battlefield through enemy lines, drawn by the power of his letters. What a moment! John Pascoe’s original costume designs, lovingly preserved from the 2007 premiere, go a long way toward injecting the requisite glitter into the Parisian scenes, despite the rather generic (and wisely uncredited) set design. The magnificent dress she wears after the second intermission turns her entrance through the encamped cadets into a luminous sunburst, making this tableau reminiscent of those dark gloomy Rembrandts where light is concentrated onto just one shining sector.

Simard-Galdés’s vocals shine in that scene, too, with fresh maturity and warmth. What stands out so vividly here, perhaps more vividly than in conventional stagings of Rostand’s “Heroic Comedy,” is how significantly Cyrano ennobles both Roxane and Christian during the 1640 scenes. Sadly, when the curtain comes down in 1655, he still hasn’t realized what he has achieved with those two souls.

From the moment we first see him as Christian, the power and purity of Sébastien Guèze’s singing seem to flatten his growth curve vis-à-vis Roxane’s. The tenor certainly upstaged Viscardi for me when he first emerged, but he regressed nicely when Christian’s boyish confidence collided with the necessity of saying something impressive and gallant to Roxane in their first tête-à-tête.

Guèze’s best moments come in DiChiera’s Act 3 when Christian has his epiphany after absorbing two earthshaking revelations. First, he learns how bravely, diligently, and devotedly Cyrano has acted in writing to Roxane twice daily. Then he learns that Roxane now loves him for the letters she thinks he has written and not for his physical allure. Guèze lets us see and hear that Christian gets it. Not only that, but realizing what an incredible friend Cyrano has been to him, he reciprocates as best he can, renouncing Roxane and urging Cyrano to claim her. Truly cavalier and very touching.

Worldliness gradually melts away from this story, but while it holds a grip, bass baritone Kyle Albertson as Comte de Guiche is its most malignant force, unctuous in his unwanted attentions toward Roxane and dangerous in his power over the cadets. On the lighter side, tenor Eric Johnston is the jovial baker poet Raguneau, so jolly that he escorts Roxane to the battlefield, momentarily turning the cadets’ grim situation into a block party.

Johnston comes by his enthusiasm naturally, for he played the same role in the same costume at the premiere of Cyrano a decade ago. He, Uzan, Mercurio, and DiChiera are all affirmations that this work is still alive, well, and continuing to evolve. This emotionally satisfying Opera Carolina production affirms that DiChiera’s Cyrano is well worthy of more life and wider exposure.